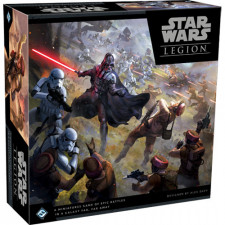 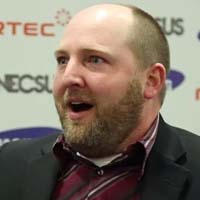 Critical Hits: Fantastic adaptation of the Star Wars aesthetic and “feel”, relatively quick play, interesting chit pull activation, wonderful models; a great beginner’s entry into complex war gaming.
Critical Misses: You cannot play a “standard” match without additional purchase, there are not enough dice in the box for many situations, and some models are delicate and hard to assemble.

I could not have been more excited for Star Wars: Legion when it was first announced, as I am a lifelong Star Wars fan and a part time, legitimate war game nutter. From the promotional shots, the game was bound to look and feel amazing, as if I was right there on Endor with Han, facing down Imperial AT-STs and, well, legions of Stormtroopers. As it turns out, Legion does exactly that, and in an approachable yet sophisticated way which will, in my mind, be a catalyst for some players that they’re done screwing around with board game simulations of war games, and start getting into true war gaming. This game does a fantastic job of bridging the gap between lighter, grid based games such as Battlelore. 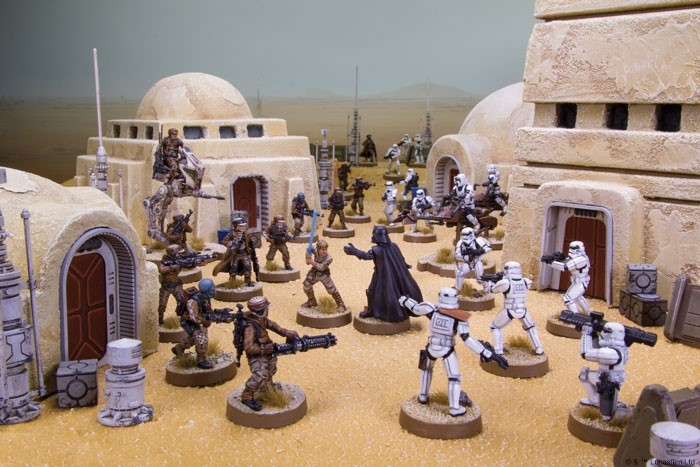 The Stormtroopers don't miss in this game, a Star Wars first…

The presentation is spectacular, as you would expect from an FFG game, but the mechanics are also well defined and easy to understand, even if you’re the kind of person who hasn’t been exposed to games like Bolt Action or Firestorm Armada in the past. This game centers on your leaders, who act sort of like beacons for your armies on a board-free, ruler based landscape. Even better, the game comes with a small amount of terrain to support the game’s rules, meaning you can use beer cans or whatever objects you have lying around to play if you wish, but you can also place these little barricades in key locations to add a little bit of bling to the table.

I don’t want to get into a rules explanation, but I do want to touch on what makes this a far more compelling and interesting war game than your average miniatures game such as X-Wing or Armada. First, this game is not an individual-scale game, but a squad-scale game. This means that you have your leaders, who command their squad, and all the action centers around these leaders. The squads they command must be within a set distance of the leaders, which makes them a cohesive unit rather than individual soldiers; they act as one when activated. So, this will be far different than what some people are used to, but it’s something that war gamers have been doing forever, and it makes for a more thematic, more simulatory experience. It’s worth mentioning that there are individual units, such as Luke and Vader, who act both as their own squad and leader, but those are reserved for capstone units who act as the heroes of the battles.

Now, beyond the scale as I mentioned above, one really cool thing about this game is the initiative and activation system. At the beginning of the six rounds you’ll play each side with pick a card to play which sets the tone for the round. These cards have powers which can affect one unit or grant bonuses when a unit is in range of your hero, and you start with a hand of seven, but they also have an initiative value which indicates both the order of play and how many units you can command directly. Once you’ve resolved who goes first, you will place markers on a number of units matching your initiative value; if you use up your allocation, remaining units’ markers are placed in a randomized pool. What this does is allow you, on your turn, to choose a unit with a marker to activate, or pick a random token from your pool and place them on any squad whose rank matches the marker you chose. In short, it makes choosing to go first cost you the ability to have definite control over your squads. 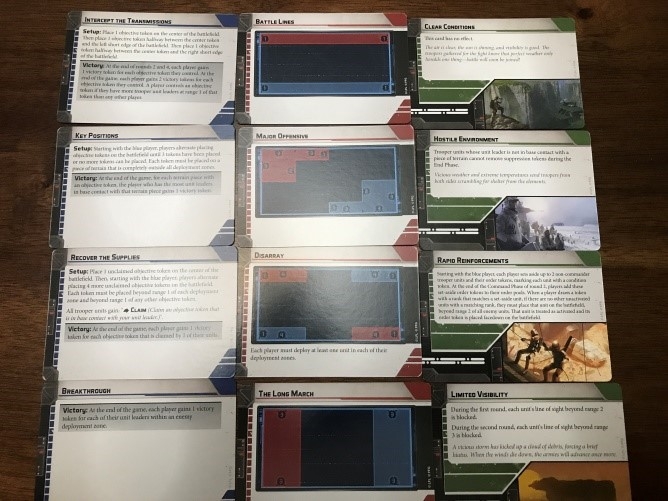 It’s this writer’s opinion that this part of the game is the most novel and innovative part of the design as a whole.

The last bit I’d really like to highlight is the scenario building system, because it’s really clever and reminds me a lot of Earth Reborn’s random scenario system, but if it had a lovechild with 501. Basically, you lay some cards out and take turns vetoing them until you are left with one in each category, which amount to objective, setup diagram, and weather. Unfortunately, this is also a huge flaw in the game, but only because they literally don’t give you enough material in the core box to play the “full game” as designed. You can play two thirds of a full game, but this is more like a “toe in the water” starter box that familiarizes you with the game than a complete experience. I figure that to get the full experience, you’re going to need either two core sets or a core set and a couple of expansions in order to really get the full Legion experience.

The system is incredibly well organized, and really easy to learn. Most everything in the game is quite instinctive and you’ll likely not be referring to the rulebook after the first play. All in all, I have shockingly few complaints about the game, and they all surround how it was sold. First, the Core set is lacking because it has too few dice, meaning you may have to remember the first roll while rolling the same dice again due to running out. That really kind of sucks when it comes up, albeit rarely, and I found it massively distracting. The other annoying thing is that it would be nice to not have to share measuring devices. The game comes with a total of four; three for movement, and one for range-finding, but it would’ve been grand to have two sets. The only other complaint I have is with the models, which are beautifully detailed and come with awesome bases, but some have small parts which are a bit of a pain to assemble, and which will require a good bit of super glue. 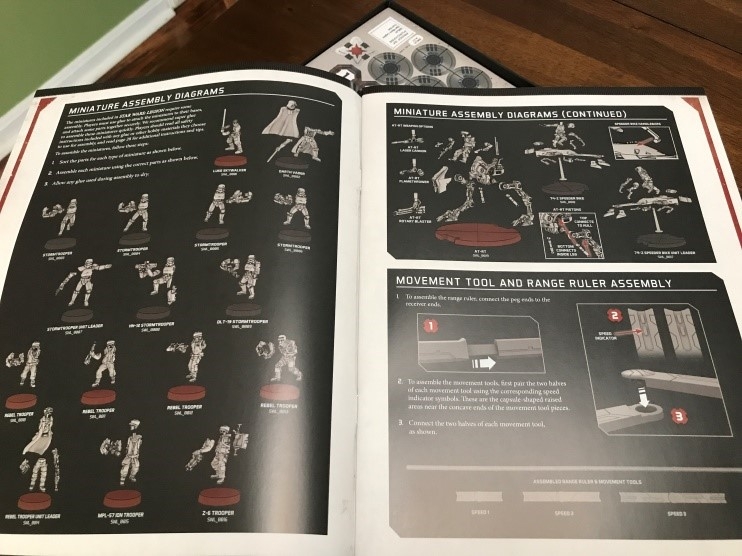 The short version is that this is a killer game, both as an entry point into war gaming and for guys like me who have been playing war games for decades. They knocked it out of the park on the rule set, the models, and the card play, despite nothing being really “new” to the world of gaming. It’s definitely a vast improvement over their previous line of Star Wars war games, although the modeling factor may be too much for some to bear, if they have no interest in painting and hobby modeling. All I know is that I’m glad I got it, and glad I got to play it.

Spencer Taylor posted on 4/16/2018 11:22 AM
My biggest gripe about the models is the lack of customization. It makes the squads feel same-y if you run more than one of the same type. It'd be nice if all the heads were separate so that one could mix things up at least a little with the Rebel Troopers.

They apparently aren't hard to convert with a little cutting, but it does seem like a bit of an oversight on FFG's part.
Pete Ruth posted on 4/13/2018 1:13 PM
Yeah, they’re not hard by modelers standards at all. I’ve been mini wargaming for over 2 decades and these aren’t bad - but to a board gamer whose experience with minis is basically opening the package of X Wing, it’s going to be daunting.

I tried to write this from that perspective
Andrew Bassett posted on 4/13/2018 11:59 AM
I'd mostly agree, but the speeder bikes were annoying, largely because the instructions make it not super clear where some of the bits go.
Terry Burr posted on 4/13/2018 11:21 AM
It's a little token heavy, like all FFG. But, I'd have to disagree about model building. I've played a lot of minis games since the 80's and legion has the easiest to build minis I've ever come across.