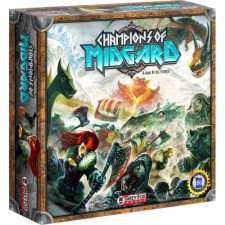 The cry rings out- â€œVALHALLA!â€ 2015 is not the year of the sheep; it is the year of the Viking. First Blood Rage left me with a stump for a neck, now Champions of Midgard threatens to claim my limbs as Norse severance.

This game is a light Euro design that combines some relatively standard resource/action management with a fantastic setting that completely masks the "work" in worker placement. It's directly comparable to the venerated Lords of Waterdeep, but when all is said and done - Champions of Midgard pillages the beloved Greyhawk city and leaves a wake of destruction.

Players are leaders of Viking clans vying for the title of Jarl of their bustling village. Without leadership to lash out against the forces of evil, trolls and draugr have begun assaulting the township. Players will become venerated heroes by attaining glory in battle if they can stem the ferocious tide.

The player with the most glory is ordained Jarl at the end of eight relatively quick rounds. Glory is most readily earned by defeating beasts in battle. It's supplemented by acquiring Runes that grant one time benefits, a private long ship to conduct your raids, amassing favor tokens gifted by the gods, or by accomplishing secret objectives found on Destiny cards. As a whole the variety is pretty strong and players will tend to pursue divergent strategies, all seemingly well balanced and capable.

Each turn players alternate deploying one of their three starting workers to different spaces in the village. Much like other designs of this genre, most openings are extremely limited creating an ongoing tension of prioritization optimizing your narrow allotment of actions. You can collect food, wood, gold, and favor directly or by conversion. A number of buildings providing said resources are randomized with each game allowing for a subtle shift in feel and approach to each session.

Collecting cubes of a different color certainly isn't inspiring and it's not a particularly striking set of motions that evokes the hard knock life of encroaching Ragnarok. That trademark Euro multi-step process of placing a worker to grab some wood, then later hitting up a different space to turn that wood into gold, which you subsequently use to acquire warriors is decidedly present.

What's interesting about this design is that this process is not altogether different from the resource gathering prelude to the quest system in the aforementioned Lords of Waterdeep. The distinction here is that Waterdeep can feel tedious and inane, particularly when someone throws down a mandatory quest and you want to curl up in the fetal position, hitting the brakes on your strategy to handle the speed bump.

Champions of Midgard never suffers from this frustrating sense of futility. It supplements its Euro conventions with dice-based combat that feels exhilarating. You acquire one of three types of dice that represent Viking warriors. Swordsmen are the lowest level, offering the fewest number of hits but a solid one defense. Spearmen are the median featuring a few more hits. Axemen close the deal with powerful blows but no shields at all.

Through play you build up your force just like any resource. When battling creatures during the turn you first assign your dice against all the threats you are engaging, offering a sometimes difficult proposition and propelling you to occasionally take some risks for greater glory. You repeatedly roll your dice in combat rounds until you score enough hits to equal the listed defense on the creature's card. The catch is each round the creature will deal a set amount of damage, which results in the permanent discarding of dice. Shields of course can block these hits from the enemy and keep you in the fight.

This title is able to tastefully season the optimization resource flavor in the design by delivering on the climax with grand drama. The tension of the dice and the lure to push your luck by riding with only a small handful of fighters will keep your behind firmly planted on the edge of your seat. You get lost in the moment and forget you're playing a worker placement game as youâ€™re riding through the lightning of Thor and driving your crimson soaked blade into the soft thorax of a lumbering beast.

Worker placement isn't supposed to feel exhilarating. Champions of Midgard does things its own way.

Half of you cringed when I brought dice into this, throwing your hands up in the air in exasperation at luck weeding its way into the experience. Yes, you can have turns where the dice spit on your mother's grave and yield no results. Yes the game can set you back and ground out your will. Fortunately it provides many options to mitigate a poor performance and seize Loki by the throat before slamming your knee into his ribs.

Fate is just another resource in this game that you have to corral. While Favor tokens may be worth two Glory at game's end, you will certainly be better off burning a few to re-roll dice in battle and ensure competence. Additionally, consistently employing a strategy of stocking up on warriors prior to jumping the axe is sound. Spending your entire first turn collecting dice and building for an offensive in the future is profitable and wise.

The combat mechanic is the overriding joy in this design space but it didn't stop Ole Steiness and Grey Fox Games from cramming little splashes of delicious Viking mead into several nooks and crannies. The hidden goals via the Destiny cards add a nice subtle layer of intrigue. Players will gain additional Glory for themselves by amassing the most of a resource or card type according to their outlined objective. Your goal does not apply to the other players so it never feels punishing or overly reliant on lucking into Glory as a game like Troyes can feel.

The wide range of creatures on offer is also delicious. You are incentivized to defeat a random troll that appears every round, as players receive shame tokens that result in Glory loss if no one confronts the beast. Taking a troll down yields normal rewards but also allows you to transfer your shame onto others. Interaction and spiteful jabs - I love it.

You can also stomp on the corpses of the plentiful draugr or hit the bottom half of the board which entails sailing to foreign lands to cull the hideous monstrosities. Sailing requires you either own or rent a long ship that you must stock with warriors and food to sustain them on the journey. The magic here is that a random journey card is encountered that has a possibility of mucking with your plans as storms terrorize your voyage or even a famed Kraken may appear. Narrative is consistently bundled with tension in the most precise and elegant of ways.

Champions of Midgard is not Grey Fox Games' maiden voyage, however, at this point in their existence it is their defining moment. Coming seemingly out of nowhere, this design is powerful and addictive as it sparks imagination and intellectual response. It's gripping and has raised an internal bar that we can only hope to see them crush in the future. Dust off your mead horn and partake in the year of the Viking.