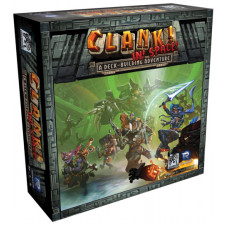 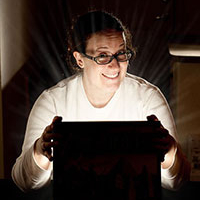 Fantasy versus sci-fi: the age-old debate over which setting is better is now being fought on your shelves. Clank! In! Space! is a reimplementation of the singular exclamation mark deckbuilding game, Clank! – a favorite of mine from last year. But this time- with three times as much punctuation- one would have to assume Clank! In! Space! is three times as exciting, right?

The premise of Clank! In! Space! is the exact same as the original, with the fantasy tropes swapped out for sci-fi tropes. You’re sneaking onto a spaceship (dragon’s lair) stealing precious artifacts from Lord Eradikus (stereotypic treasure-hoarding dragon) and making it to an escape pod (above ground) before all that clank you clumsily caused gets you caught. Instead of the double-sided board that Clank! provides, Clank! In! Space! gives you three double-sided sectors that can be placed in any configuration. I’m no mathematician, but I think the number of possibilities that provides is firmly in the “lots” category. 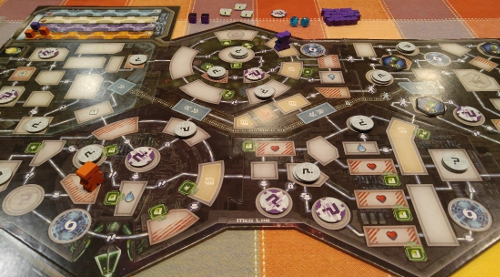 In space, no one can hear you clank… except Lord Eradikus.

Aside from getting accustomed to the somewhat visually overwhelming space board, one thing those familiar with Clank! have to get used to is the new hack mechanic. On each ship sector, there are spaces to place one of your two data cubes. Before breaking into Lord Eradikus’s private chambers, you must hack two data ports, each in different sectors. When hacked, these data ports usually provide you with a reward, such as money, heals, or attack. Other data ports cause you to add clank to the pool. Of course, the better rewards are further down the spiral of the sector’s winding pathways whereas the clank ones are easier to hit on your way through the spaceship. This additional hacking task adds some complexity to a game that I’m not sure needed it. There’s already plenty to think about from plotting your course to building your deck to mitigating clank. Though not always difficult to accomplish hacking two nodes, it often feels more like a chore than a welcomed challenge.

Another difference between Clank! In! Space! and its predecessor is that some cards have a faction affiliation. Some of these cards have a bonus effect that goes off if you play another same-colored buddy. For example, both the Traitor and Space Skunk belongs to the Outlaw faction. If the Traitor comes up along with Space Skunk, then the Traitor’s effect of causing all other players to get +2 clank is triggered. We’ve seen this mechanic before in many games, with varying success. In Clank! In! Space!, it works just alright. Because not all cards belong to a faction and there are three different factions, it’s difficult to know that buying the Traitor for his faction effect will pan out. Then, even if you do get additional Outlaw faction cards into your deck, there’s always the random shuffle to contend with, meaning the Traitor’s effect still may not go off. Although I’m generally a fan of this unite ability, its lack of reliability makes choosing certain cards a gamble. 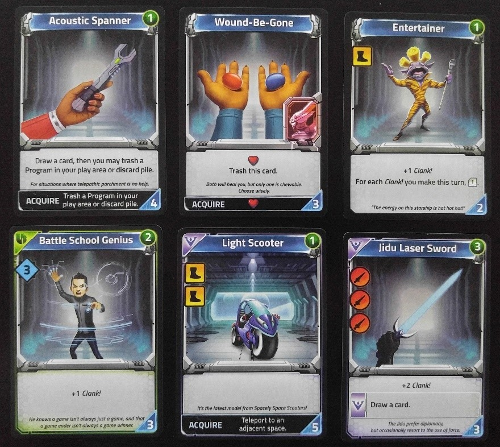 Totally not infringing on any IPs here.

Spaces on the board maintain their same restrictions seen before. Crystal Caverns are replaced with Security Checkpoints, forcing you to end your movement for that turn. The market has multiple spots across the sectors where you can purchase items, different from those in Clank!. There is still a Master Key, allowing you to move along locked paths. The three crowns with no use other than points are replaced by the 10-point Contraband item. Some cards have this icon on them, so purchasing Contraband allows you to activate those bonuses. There are no longer any backpacks to help you snatch up additional artifacts. Instead, there’s a Med Kit that instantly heals two points of damage. Finally, there’s the TelePass, which allows you to use the Telepads scattered around the spaceship. These spaces let you easily jump from one sector to another, though you’re not allowed any further movement after using them. The only other way to get around this quickly is using the Hyperlift, a conveyor belt spanning the left to right side of the board (with the same movement ending effects).

The rest of the game plays out like normal Clank! with, again, the fantasy flavors of cards swapped out for sci-fi ones. I appreciate all the tongue-in-cheek references and jokes on the cards, harkening to classic space epics to more modern blockbuster hits. For me, fantasy themes will always win out, but the fact that Clank! In! Space! is more than just a re-theme, choosing which version of Clank! to get is not simply a decision based on aesthetics. 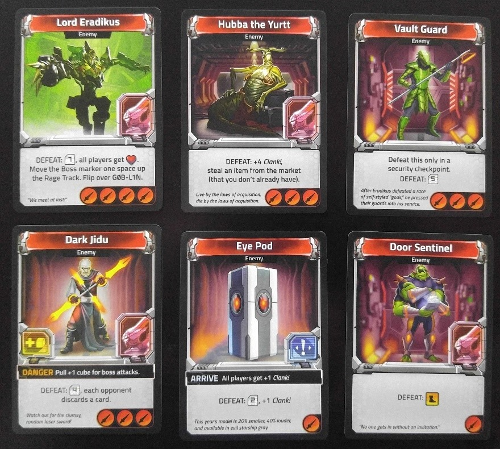 I would watch a Sy-Fy Original Movie with these guys.

In many ways, Clank! In! Space! feels like hardmode Clank!. You get beat up a whole lot more, in part due to the bounty hunter cubes that come into play in the last few spaces of the rage track. These cubes get thrown into the bag along with the clank. When they are pulled, everyone takes a damage and the bounty hunter cubes go back into the clank pool, waiting to get recycled into the bag again. This is brutal, especially toward the end of the game when you’re trying to escape. Relatedly, the race against your opponents is also turned up a notch meaner. You can actually cut in front of someone trying to jump into an escape pod, stealing it from them and laughing as you float into space. Though there are enough escape pods for everyone, this costs them valuable time. With a fixed four cubes getting pulled from the bag when it comes around to an escapee’s turn, every boss attack is terrifying.

For those of you wondering whether it’s worth owning both Clank! and Clank! In! Space!, my answer is a resounding maybe. It depends on how much you love Clank! as the two games occupy the same space, physically and mechanically, in your collection. My personal leaning is for original Clank! not only due to the theme, but because it is more streamlined. It’s possible the extra stuff added to Clank! In! Space! wouldn’t feel so difficult – or different – had it been released first. Regardless, whether you prefer stealing from dragons or robot overlords, you can’t go wrong.

Yeah, but a necessary evil, I think it allows players time to build their decks, then actually get use out of that deck, vs, getting started, looking good, then the player who does nothing more then dash in, cheap artifact, bee lines out, you go through your deck just a token amount, game over.

Space isn’t as easy to teach as the original, looks overwhelming, but the thing you really give up is that shorter pay time. I just don’t see any other way to fix the original without a longer play time?

Forcing players into the spirit of the game, that is a risk game at first versus race at the start?

Given the number of expansions for the original I don’t see why anybody who owns the original has a complaint against CiS if you view CIS as a slightly longer game that somewhat guarantees the use of a more mature deck?

The two versions seem to fit two different niches, the whining you hear from the hardcover fanboys is nothing more then CiS isn’t an expanse for the original.

I often wonder what people would think of the original Clank! If CiS came out first?

What the publisher should’ve done is released CiS as an expansion for the original Clank!, you need the first Clank!, but just the Clank! bag is used with CiS :)

Any who, nice review.