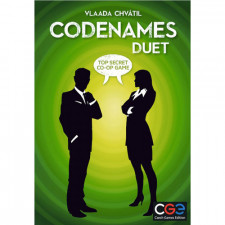 My copy of Codenames has dinged corners and faded edges. It shows how often itâ€™s been handled â€“ a sign of a beloved game. Iâ€™m proud of this wear. It reminds me that Codenames is one of the few games Iâ€™ve played over 100 times in just two years. This is a board game badge of honor for me as my attention can often wander to shiny new releases, leaving those totally old and outdated games from three months ago to collect dust on my shelves. Codenames, however, has been thrown in my game bag time after time. It is the perfect blend of party, team, and word game, with a ribbon of strategy tying it all together. It seems impossible that you can recreate this in a 2-player version, but amazingly Codenames Duet does just that.

In essence, Codenames Duet is like its older sibling: the spymaster (clue giver) tries to get their teammates to guess all of their agents (words) while avoiding the assassin (black X). In case youâ€™ve somehow avoided Codenames for the past two years, the way this works is simple: provide a one-word clue and a number corresponding to how many words relate to that clue. The prompt â€œbanana, 2â€ will hopefully point you toward monkey and fruit (not hammock, Dad). Linking as many words as possible is the goal of each spymasterâ€™s turn. Tailoring the clues to your teammates- knowing that theyâ€™ll get an obscure reference- turns one game of Codenames into an all-night marathon.

Typical. Iâ€™ve got a great clue for words that arenâ€™t mine.

Using this premise, Codename Duet accomplishes the same clue-giving cleverness and clue-guessing tension by making each player both the spymaster and the guesser. Each side of the key card shows nine agents as well as three assassin spots. Thatâ€™s right, three. To add to this challenge, only one of your three black spaces will be black for your teammate; the other two are green and tan (bystanders). That means there are actually five distinct spots on the board that, depending on who guesses, will result in an instant loss. There is nothing more terrifying than pointing to a word on a space you see as black, but is really green for your teammate. You canâ€™t help but flinch in the microseconds before your teammate confirms itâ€™s correct.

Knowing how the assassins work provides you with some strategy. Once youâ€™ve found the assassin who is green for your partner, you know the other two black squares are no longer viable guesses. Eliminating potential guesses is immensely helpful in succeeding before the 9-round timer is up. Additionally, of the 15 words you and your teammate have to collectively find, three of them overlap. Often, your partner gives you a clue for one of the three before you get to it. This provides some respite as you stare at the word â€œbulbâ€ and wonder how youâ€™re ever going to link it with curry, sloth, and attic. Thanks for the save, buddy! 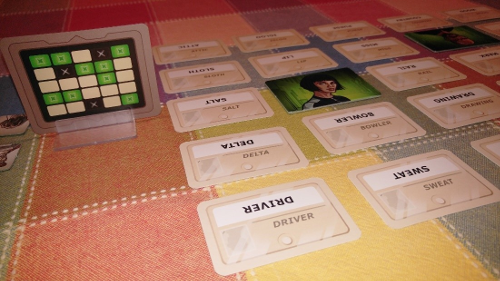 How do you link â€œdeltaâ€ and â€œbowlerâ€? You tell me.

Though Codenames did come with a 2-player variant, its play-against-the-game style simulated an opposing team by covering up one word each round. This is an okay way to play if youâ€™re hankering for some Codenames. However, Codenames Duet gives you a Daniel Craig 2-player experience instead of a making do with a Pierce Brosnan one. (Obviously, original Codenames is Sean Connery in this metaphor.) All the mulling over the right clue to give and cries of â€œNone of my words go together!â€ are as present in Codenames Duet as it was in its predecessor. The way that the key cards and back-and-forth clue giving captures that exciting pressure in a 2-player design is impressive.

Just like original Codenames, it can often be the luck of the draw that determines how clever of a clue you can give. Sure, the cards jockey, saddle, and rodeo practically write their own clue of â€œhorse, 3,â€ except when â€œjockeyâ€ is the only word you need your teammate to guess. Still, both you and your partner are in this word association journey together. Interestingly though, despite you winning or losing the game together as a team, youâ€™re not really collaborating with one another. Of course, you both have the same goal, but thereâ€™s no conferring about your options or strategies. This is unlike most other cooperative games where you just have to survive through waves of baddies, cure nonstop spreading diseases, or whatever other swimming-up-stream mechanics the game has in store. For some, this feeling of starting the game already in a losing position really spoils cooperative experiences. Instead, Codenames Duet feels like youâ€™re both part of an elite codebreaking team. And when you win, despite picking â€œpuppetâ€ for the clue â€œbirthdayâ€ (I said I was sorry!), it is worth some enthusiastic high fiving.

I already had high expectations for Codenames Duet given its pedigree, but those were far exceeded by the play experience. I know that in time, the pristine green box will eventually start to show the scuffs and bends of a game well loved.