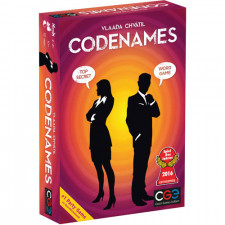 Codenames, by Vlaada Chvatil, is a party game that requires the participants to use their powers of association and reasoning. Players are broken down into two teams â€“ red and blue. Before them is set a random assortment of 25 cards in a five by five grid. Each has a single word displayed.

The players then draw one of 40 key cards. The key cards can be placed in any orientation and show which of the word cards belong to which teams. One will have nine words, the other will have eight. There will also be an assassin word and seven that donâ€™t belong to either team.

Each team gets one spymaster who can see the key card and who knows which words belong to which team. Then, starting with the team with nine words, the spymaster gives a clue. The spymaster can say a single word, followed by a number. His team must then try to guess which of the 25 words correspond to that clue. So, if the spymaster says, â€œHole, 3â€ there are three cards related to hole. It might be â€œpitâ€ or â€œmoleâ€ or â€œshaft.â€

If the team guesses correctly, they can keep guessing up to the number stated by the spymaster. If they guess wrong â€“ either by picking a word for the wrong team or by picking one of the non-team words â€“ then they are done and itâ€™s the other teamâ€™s turn. Each guessed word is covered by a card. If they pick the assassin card, then the team immediately loses the whole game.

Codenames is a simple, easy to explain concept. It can readily be played in a crowded setting as a party game. Despite that, Codenames eschews the normal conventions of party games. It doesnâ€™t rely on mindless prattle, embarrassing stories, or hokey actions. Instead, it forces the players to consider their clues carefully. Instead, it asks for thoughtful clues and clever interpretation.

For the spymaster, everything is riding on their clue. They have to give something that will point to as many of their teamâ€™s words as possible. But, at the same time, it shouldnâ€™t give any reason to pick a card from the opposing team â€“ or worse yet, the assassin card. Words with double meaning are the spymasterâ€™s best friend. A clue like â€œspyâ€ might reference â€œagent,â€ and â€œlook,â€ and â€œbond.â€

The spymaster also faces strong tension between giving a word with fewer clues and one with more. Itâ€™s easy to find a codeword that references two word cards. But if the other team gets more than two, you will find yourself behind. Meanwhile, picking a word that references three or four cards results in a link between the codeword and the word cards is more attenuated and the potential for errors creeps in.

For the team, though, Codenames is just as challenging. The team hears, â€œRock 2.â€ What does that mean? Does it refer to â€œStoneâ€ and â€œGraniteâ€? Perhaps itâ€™s a reference to â€œMusicâ€ and â€œSuccess.â€ The teams are often in the hot seat as they try to decipher the code words in a way that makes sense â€“ all the while knowing that one wrong guess could end the game immediately.

All of this coalesces into an absolute blast. Codenames is fun, inventive, challenging, thinky, simple to explain, and easy to jump into. Plus, a single game only takes about 20 minutes. Although, to be fair, Iâ€™ve never had a group want to play only one game. The simple nature of the rules will mean it can jump out in most party situations. Itâ€™s easy to explain and simple enough to play that non-gamers can readily enjoy it. Meanwhile, there is enough cerebral challenge â€“ even tactical play in what to guess and when â€“ that gamers are faced with lots of deliciously delightful decisions.

Maybe â€œfireâ€ is a word for your team and â€œcookâ€ belongs to the opposing side. It might make strategic sense to give a codename for fire later in the game. That way, it exists as a distracter for the opposing team. It forces their spymaster into a tighter spot and increases the chances that theyâ€™ll pick your word for you.

If there is one flaw to Codenames, itâ€™s that you have to be careful who you play it with. The Spymaster knows all and the whole point of the game is that he or she can only communicate one word at a time. They must maintain a poker face. If they nod their head, raise their eyebrows, say, â€œThis may be a stretch, butâ€¦â€ or otherwise do anything other than one word, it can cheapen the experience. So spymasters must either be very dedicated to playing it right, or be reigned in by zealous teams.

But that qualm is extremely minor. Codenames is a fantastic experience. Enjoyable, exciting, tense, and readily playable. Like eating potato chips, itâ€™s difficult to try just one. Every play has been followed by calls to play again and volunteers for the new spymaster role. In fact, the enjoyment factor per unit time is extremely dense. And you should definitely jump into the nearest game of Codenames to try it out.