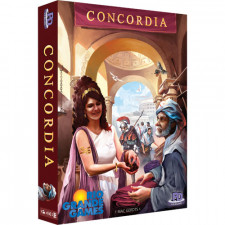 â€œThe simultaneous planning for both now and the end-game is what makes Concordia interesting.â€

The theme of Concordia isnâ€™t clear. Are we Roman factions? Or conquering legions? Iâ€™m not sure. But Rome is definitely involved somehow. Players expand throughout the Roman Empire while also building a hand of action cards which, simultaneously, also provides end game points. But what does it all mean?

Players begin with a small hand of action cards. They arenâ€™t shuffled into a deck, so you get access to all of them to start with. Then, on a playerâ€™s turn, they can play a single card to take the described action. The catch is that the card remains discarded and unavailable until the player takes a tribune action, which allows him to pick up all discarded cards. Picking up cards gets you access to your actions again, but it is also the only thing you can do on a turn. In other words, it can feel like a waste. And if it comes at an inopportune moment, an opponent can swoop in and steal the city before you get there, or take the resource that you wanted. Part of the game, then, is to have fewer of these turns (or at least time them effectively) and more turns taking meaningful, game-improving actions.

The more productive actions include moving your colonists into new territories, extracting goods from various Roman regions, and buying new cards from the card row. The row displays seven cards with the price increasing the further along you go. A purchased card is added immediately into a playerâ€™s hand â€“ meaning he can take that action the very next turn.

So part of the game is to create the right composition of cards in hand so that you can consistently take the actions you want. Are you going to place your markers in more cities and get access to more income? Well, then youâ€™ll find Architect cards to be the most helpful. If instead youâ€™d rather focus on a few goods and trade them in for what you need, then the Mercator action will be helpful. And the more actions you can take without wasting a turn picking cards back up, the better. In fact, if you pick up more than three cards, you get a little bonus in coins. This helps encourage players not to simply play a card, pick it up, play it again, ad naseum.

Importantly, there are no in-game points. Everything is scored once at the very end of the game. And if you just focus on the here and now, youâ€™ll find yourself standing there with your pockets turned out at end game scoring. Every action card youâ€™ve accumulated over the course of the game gives bonus points based on specific criteria. Some give points based on how many cities youâ€™ve built in, others give points for colonists or goods. So, letâ€™s say I have a card that gives me two points per colonist and I have four colonists. Eight points. Thatâ€™s cool. But if Iâ€™ve managed to grab five of those cards during the game â€“ bam! Now itâ€™s 40 points. Thatâ€™s a lot better.

Planning for the end game is critical because thatâ€™s all there is. In some ways, playing the main game is just an exercise so that you can get more end-game points than anyone else. So it isnâ€™t enough to build a lot of houses or fill your warehouse with goods. You have to turn those into points by also adding the right cards to your hand. A good score, then, means you have to do both.

Concordia also forces tough choices. When you extract goods from various regions, you get a primary good, but all players present in that region also get goods from the houses theyâ€™ve built. So, you have to decide whether taxing that particular region is the best move. Maybe itâ€™s better to let someone else do it so you get the resources without wasting an action. Plus, players each get a small storehouse that can hold goods. But it can only hold twelve. If you get more than that, youâ€™ll have to abandon some.

The cap on goods keeps the game tight. Thereâ€™s no â€œbig moneyâ€ strategy where you spend the early game getting goods and then go through a rampant buying spree in the late game. Instead, players only have enough goods to buy a few cities before needing to replenish. And, the cities you buy will influence the goods that you can receive. Managing both aspects to create a solid cash flow (goods flow?) is key.

All told, itâ€™s a pretty fun game. The mechanisms work together solidly and it forces players to think about both the near and long term. Thatâ€™s what youâ€™ll write home about when all your relatives want to know what games are like in the big city. The simultaneous planning for both now and the end-game is what makes Concordia interesting.

But one interesting feature is not enough to turn this game into an instant classic. While the simultaneous long term and short term planning is a fun aspect, there otherwise isnâ€™t anything especially new or exciting about Concordia. Itâ€™s a good game that retraces a lot of ground from other titles.

Now, if youâ€™re just getting into the hobby and craving more medium weight euro games (weâ€™ve all been there), then you should definitely look into Concordia. It will make an excellent addition to your library and I foresee much mirth in your future. But if youâ€™ve been in the hobby a while and are looking for something novel, something set apart from the euro games around it, then Concordia may not exactly fit the bill.