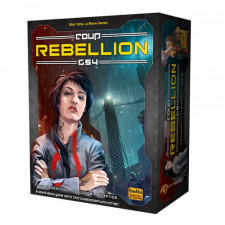 I really loved Coup when it came out, and Iâ€™ve played that particular game well over a hundred times. My family digs it, so whenever we head somewhere on vacation, itâ€™s a go-to. Well, when the Guatemalan Revolution-themed Coup version was released at Essen last year, I sought it out mightily, to no avail. That really bummed me out until I heard that a re-skin of that game was being released in the States but with the dystopian sci-fi theme that weâ€™ve become accustomed to. I ended up getting it, and I was thoroughly surprised by the smart, intriguing changes they made to the setup while retaining the same basic gameplay.

This game is identical to the vanilla Coup in virtually every way, except instead of having only five characters to play with ad nauseum, this version comes with 25 different characters, which are randomly selected during setup. This creates an environment where a near-infinite number of possible mixes of characters exist, and it works really well to make an already great, simple game much greater and slightly less simple. You see, they didnâ€™t just add cards, they also added some new mechanics, the most interesting of which allow you to use newly-devised tokens which affect the game state. They arenâ€™t always used because theyâ€™re linked to specific characters, but there are enough characters that use them that it really kind of makes an already great game into a phenomenal one. The real brilliance of Coup has been that its simplicity belies the complex situations that are created by the lying and backstabbing the game produces, and this new version takes vanilla Coup and loads it up on steroids. 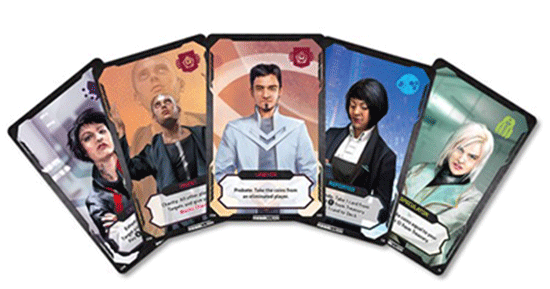 If youâ€™ve never played Coup, let me give you the short version: You randomly get three cards and must BS and strategize your way to killing off your opponentsâ€™ cards. This is done by taking one action on your turn, one of seven possible actions. The rub is that while you can take any action, if you donâ€™t have the card that lets you take it legally, someone can call your bluff, and if youâ€™re caught with your hand in the cookie jar, that character dies. Again, Coup is a rules-light game that is more than the sum of its parts because of the backstabbing and bluffing, and not much has changed with regard to this new iteration. The real draw to buying this if youâ€™ve already got Coup is that itâ€™s not just more of the same, itâ€™s an evolution. With the new tokens and special rule-breaking character powers, G54 has become the apex predator of the Coup ecosystem.

The art is even improved over its predecessor, with much more interesting and more emotionally expressive character art. In the original Coup, the characters all seemed woefully aloof of their precarious predicament, whereas with this version, the characters have a much more intense look about them. I wouldnâ€™t think it made as much of a difference to me as it did, but it certainly helped immerse me in the setting, or at least as much as a twenty-minute filler can.

At the end of the day, you canâ€™t beat this game for the price. Itâ€™s a tantalizingly nasty game of treachery, and despite its minimalist rulebook, thereâ€™s a lot more game in the box than meets the eye. I highly recommend it for any group of at least three players who are seeking a very high quality filler-type game that can be played three or four times in rapid succession without overstaying its welcome. Itâ€™s just a damned fine game.