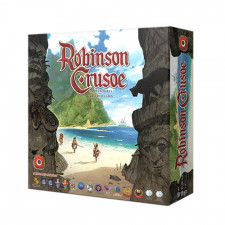 Mario Kart Double Dash the board game. Thatâ€™s a concept you can sell anyone on.

In Crazy Karts players operate in teams of two to race down the board and take pot shots at their opponents while frantically trying to coordinate without communicating. Itâ€™s about navigating messes and reveling in chaos. Run into a wall and giggle hysterically at your own ineptitude. Itâ€™s great in a self-degrading sort of way. Or at least it starts that way.

Each team is split into two drivers where one controls acceleration/shooting/repair, and the other mans the wheel of braking/turning/powering up. Itâ€™s a split of duties that evokes maximum buffoonery and ups the silliness.

At the beginning of the round everyone draws cards from their individual decks based on their current speed. The slower youâ€™re ambling the more cards you draw which allows you to more effectively perform actions. Clever is the word that immediately comes to mind (Iâ€™ll be saying that a lot in this review).

Cards consist of different values ranging from one to three. You play them to your personal control panel to power up available actions. This occurs in a mad dash of real time with everyone hurriedly throwing down cards and attempting to employ their own notion of strategy. The problem (and fun) comes in with the fact that you are not allowed to communicate with your co-pilot in any way. 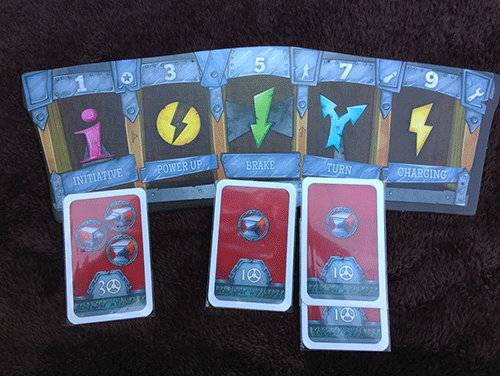 So you have two teammates both attempting to steer a battlewagon and neither knows what the other is up to. Itâ€™s like youâ€™re piloting Lion Force Voltron but only in charge of a single limb. Or a gangly teen stumbling around on their first bender. Itâ€™s not pretty but there are certainly moments of outright splendid revelry in this maelstrom.

Youâ€™ll have hilarious incidents where one speeds up while the other breaks. Or maybe you turn to go around an obstacle but you donâ€™t have the strength of cards needed because Timmy slammed on the gas unexpectedly.

The goal here is to reach enough of a level of coordination to fly down the track and cross the finish line first. Youâ€™re competing with up to three other teams launching bombs and running into obstacles that bang up your wheels. Itâ€™s goofy and fun, until itâ€™s not.

The game runs into several issues which stymie the most joyous moments. The first problem is that the speed system is clever as all get out, but your natural inclination of speeding up takes agency away from the players. By receiving less cards at top speed you have fewer options on your turn and become a passenger. Donâ€™t worry though, because youâ€™ll hit something soon enough and lose velocity.

The second pothole in the road of shame is the crazy damage system. If you meet range then you draw a card from the damage deck and apply it to your opponent, offering a ridiculous spectrum of severity. I like drama and unexpected swings in games, but the range here is overwhelming.

Sometimes youâ€™ll hit your opponents and theyâ€™ll draw a miss, giving a chuckle and throwing a snide remark your way. Then they fire back and your right wheel explodes into a thousand pieces, or your kart catches fire. Sometimes youâ€™ll even have to permanently remove one of your cards from play. 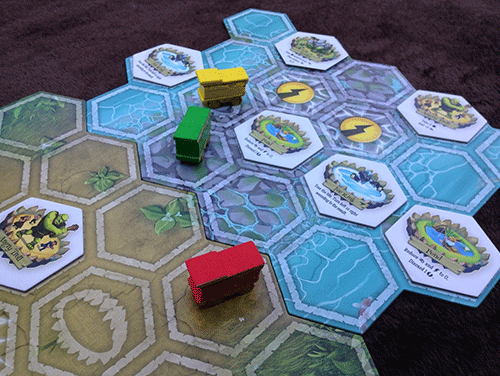 By the rules play consists of a shorter time trial race followed by the real deal. This is slightly annoying as the whole affair takes too long and can result in punitive outcomes. Only some damage will heal at the result of the time trial and you could be stuck with that stub of a wheel for the main event. Brutal.

It also doesnâ€™t help the olâ€™ hypertension that many of the damage cards feature imprecise wording. This plagues other effects and powers throughout the design and can lead to some inter-scrimmage haggling. Having to paw through a relatively simple ruleset for these misunderstandings can be frustrating. In many cases the inclusion of a single word or two into the ability would have made a world of difference.

The final nail in the coffin is a seemingly clever initiative system with a major hole. Players can bid for initiative each round by placing some of their cards on the corresponding player board space. The team with the largest investment goes first. Remember, if youâ€™re moving slower you draw more cards each round and will be able to throw more into the initiative bid.

It works because you typically brake and speed up before you move in the game. So you canâ€™t strategically halt near the finish line to increase your card draw for the final round and guarantee the initiative win. Doing so would mean you wouldnâ€™t move on that round and your opponent would zip past you.

The problem is that most of the tracks include a roadblock of obstacles near the exit. Normally you want to avoid obstacles as they are detrimental. This feeds positively into the navigating system and boosts the humor. At the finish line, however, you will want to ram hard into those speedbumps and commit to whiplash.

Rocks are the most common obstacle which damage on your kart but drop your speed to 0. See the problem? Hit the rocks near the finish line and bam, whiplash. It doesnâ€™t matter if the jabronis in the wagon a space behind you are flying down the road at a ridiculous seven on the speedometer. Youâ€™ll win the race by throwing a huge swathe of cards into initiative while your teammate boosts speed. It doesnâ€™t matter that you were at a dead stop, you grab the win with a loop-hope thatâ€™s surprisingly common.

Crazy Karts has enough moments of laughter and ridiculousness that it manages a modicum of redemption. Itâ€™s not a failure and it does mostly work, but it has too many loose bolts and a knocking engine that paints this one for what it is: a lemon.