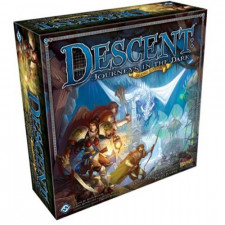 Fantasy Flight Games has just released an app for mobile devices called Descent: Road to Legend that I think could be revolutionary and not just in terms of re-invigorating sales of the Descent product line. In a sense, it builds on some of the automation and randomization concepts that were present in their XCOM game from last year and some of the mechanics from the co-op Descent campaigns like Forgotten Souls, but with this evolutionary step they are not only hacking out a chunk of Descentâ€™s kludgy and boring Overlord player role, they are also possibly probing a new way to deliver content with a free mini-campaign and a just-released (and shockingly free) full-length one delivered as in-app downloads. I thought this latest incursion of technology into the tabletop world would make for a great discussion among The Review Corner writers, so join us for our first ever roundtable as we discuss Road to Legend and what it means for the future of games â€“ and for players.

Kyle: I think the potential for using the app as a content delivery system is intriguing. There is so much potential there for new ways to expand a product line.

Michael: I think it may turn out to be the most innovative feature of this app- digital expansion of physical product. But you would still need the physical materials to â€œunlockâ€ elements in the app, so it isnâ€™t like this app is undercutting retailers or foreclosing on the tactile and visual qualities of tabletop games. And the potential for expansion content freed of the logistics of publishing, the limitations of printed cards and rulebooks, and the patience of players to deal with complex material is vast.

Nate: Descent is a good candidate for an app like this, since Fantasy Flight has been tinkering with this system now for well over a decade. Most of my experience comes from the newest iteration, Imperial Assault, but I did play a bit of the first edition Descent several years ago, and I had a failed campaign in second edition that never really got off the ground. Most fans of the first agree that Road to Legend was the high point of that version, so it's nice to see FFG bringing it back.

Pete: But the hard fact is that regardless of Descentâ€™s long term success, many people don't like one-versus-many games, primarily because being the "Overlord" is a generally not much fun; it's like being a DM. This app very wisely takes the DM out of Descent, and thus the game becomes a pure co-op, and a world-class one at that. This is probably the single smartest move FFG has ever made; it will breathe new life into the game system and attract a lot of new players.

Michael: Playing with Road to Legend made me realize that a lot of my angst toward the Descent system is the Overlord role. It just does not work in my opinion, to have a DM or referee that is also in competition with a group. You get into these situations where you can either run the other players into the ground or hold back in the name of group fun. And inevitably, itâ€™s the owner of the game that always gets stuck playing Overlord. Iâ€™m happy to cede that role to a mobile device.

Nate: Agreed, I think this is a good move for those games where one player plays everyone else. It's a very tricky genre to get right, since it so often devolves to making the one player a de facto game manager rather than someone who is actually playing as well. As far as I'm concerned the role of game manager is one I'm fine moving to my phone.

Byron: Apps have the potential to do a lot of the heavy lifting â€“ like the Overlord role - that makes certain styles of board game onerous.

Raf: Integrating the digital world with the physical world allows for things that are either impossible or too tedious to implement with cardboard. That may be this appâ€™s greatest triumph, that it handles so much of the original design in a way that wouldnâ€™t really be possible without the technology. I like when games include card or table based bots or AI for the enemy but an app will allow them to be smarter and easier to implement.

Michael: If thereâ€™s anything I would criticize sharply about the app, itâ€™s that it doesnâ€™t really go far enough in its automation and the AI is â€œdumbâ€. I wish it tracked more, I wish it had an actual AI that kept up with who is standing where and what is on the board. Itâ€™s really, despite all of its innovation, kind of a fancy way to package RNG events and activations.

Pete: True, but I especially like that it gives you specific, understandable actions to take with enemies â€“ it handles all of the AI triage and the Overlord actions with very little need for players to input or track information and that's exactly what Descent needed. It reduces the playtime dramatically and cuts right through a lot of the BS analysis and administration that often bogs the game down.

Byron: You can see the value of this in other games as well. Witness the new Pathfinder app from Obsidian. This is a complete digital integration, not a helper app, but the degree to which it speeds up gameplay by handling all the deck-building, shuffling, dice counting and location- and quest-specific effects is a great example of what app-enabled games can do.

Nate: I feel like we've been waiting for app-based elements to really get a foot hold, and so far it hasn't yet been used as much more than a novelty. Even last year's X-Com game was well-regarded, but didn't ultimately have much impact. So until we've actually seen a ton of games really jump on this bandwagon, I'm a bit skeptical.

Byron: Yet Fantasy Flight has actually been in this business for years with its Arkham Horror helper app. Until now, app integration hasn't been used to its full potential, mainly due to backlash from gamers. People get into this hobby for all sorts of reasons, some of them specifically to get away from screens for a while, so there's always a hue and cry when hybrid games are announced, people demanding an analog alternative. This sort of consumer pressure, I think, defeats the whole purpose of the app, which is to do things that actual players normally couldn't, whether it's complex calculations or semi-hidden information. In this sense, I think Road to Legend comes closest to moving beyond mere automation of standard gamer functions.

Kyle: I'm still not sold hook, line, and sinker on app-based games. One of the most attractive aspects of tabletop gaming is the transparency of the mechanisms. Not only do I get to see the results of the design, but I get to see how the designer went about accomplishing his goals. So the more opaque the mechanismsâ€”specifically due to obscuring by a calculations-heavy appâ€”the less interested in the game I'm likely to be.

Michael: So Kyle is the lone Luddite among us, but he has a good point about opacity. When you donâ€™t see the die rolls in a board game app, for example, it feels like something is missing. But I think Road to Legend does a great job of retaining all of the â€œgoodâ€ work that goes on in a game of Descent, while eliminating most of the â€œbadâ€. So do we think that this is the Brave New World of tabletop gaming?

Raf: I certainly hope so. Designers do need to be careful however. Golem Arcana and World of Yoho may turn out to be cautionary tales of the dangers of going too far into the Matrix. So long as it's done cautiously, I welcome apps with open arms.

Nate: It sounds like a copout, but we'll just have to see what publishers have in store for us next- it looks like an interesting future, to be sure.