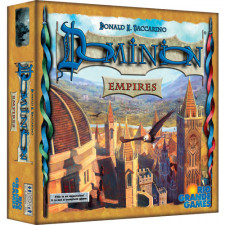 When I was just starting into modern board gaming, Dominion was one of the first games I played. I can still remember sitting at the table, a few turns in, and the light bulb going off as I realized, â€œYou build your deck during the game!â€ My mind was blown. Like many gamers, I dabbled in Magic: The Gathering a bit during in high school and early college. I really liked the idea of it, but something about it just never grabbed me. Dominion, however, grabbed me by the hand, twirled me around, and put a ring on it. I was instantly in love.

One of the great things about each Dominion expansion is discovering the new twists to the game. Each expansion has its own theme, not only in terms of the art/story, but also what the cards do. Though some may say each new set is just another proverbial milking of the cash cow, Iâ€™ve yet to feel like any expansion was designed as such. Rather, each new set sends a refreshing burst of new life into a game that Iâ€™ve still not gotten tired of after playing for 7 years. As someone who does not read the plethora of strategizing and theorycrafting that is out there, every game of Dominion for me is a novel experimentation of card combinations â€“ some of which succeed marvelously and others that fail astronomically. With the release of every new expansion, I get excited to see what Donald X. Vaccarino has come up with this time (and I am in constant awe of how he keeps coming up with new ideas). 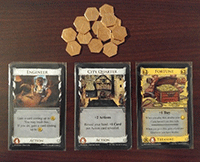 What Empires adds to the now 3000+ card game is debt (buy now, pay later), landmarks (endgame ways to score), and piles with multiple cards (buy the top half to get to the bottom, more expensive one). There are also â€œgatheringâ€ cards, which means that an action may do something to that pile, such as stacking victory point tokens when you play them. These all add fascinating new decisions to the game. If you buy a card with debt, you canâ€™t buy any more cards until you pay it off. Is it worth it? Landmarks give you some endgame goals to consider, but maybe youâ€™ve got another strategy that will earn even more victory points. Should you even bother buying the top cards in a stack just to reach the bottom, better ones? Will there even be enough time in the game to make it worthwhile? With just these few additions, Dominion has changed yet again, making a myriad of new and exciting card combinations possible. And hey, even if you donâ€™t like some of the new cards, just donâ€™t play with them. (Iâ€™m looking at you, Torturer.) There are plenty of other choices, especially once you combine sets. 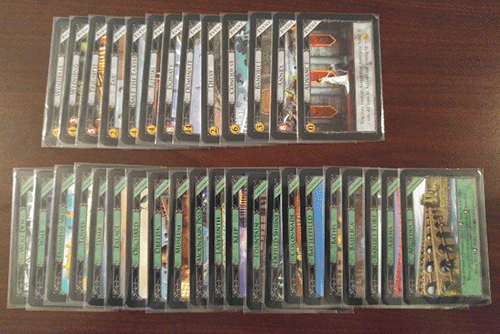 For those who are not Dominion fans, Empires wonâ€™t change your mind. It isnâ€™t going to make the game any less multi-player solitaire or infuse theme into the relatively dry, purely mechanical game of constant shuffling that Dominion is. Empires simply adds more of the same, keeping things feeling fresh and prolific for those of us who are okay with not making eye contact with our opponents throughout an entire game. Like the other more recent expansions before it, this set is not for Dominion newbies. Although the cards themselves are not too complex, understanding how they fit in with the engine-building at large can be very tricky, even for experienced players. However, for any Dominion enthusiast, this expansion will surely satisfy that excitement of reading what the new cards do and figuring out how to use them effectively. And even though my storage solution is bursting at the seams, I still welcome even more expansions after this.