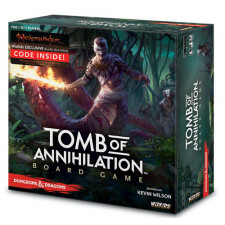 I've been a fan of the Dungeons & Dragons Adventure System games since Castle Ravenloft released in 2010. Seven years and five releases on, I still think this is the best, most fun modern dungeoncrawler on the market. It's free from the baggage of the big Kickstarter examples of this genre, and it beats Fantasy Flight's even longer-running Descent system hands down. Ironically enough, Descent's designer Kevin Wilson is credited as the designer of this year's edition, Tomb of Annihilation, which also figures into Wizards of the Coast's current promotion of the jungle-riffic Chult setting. 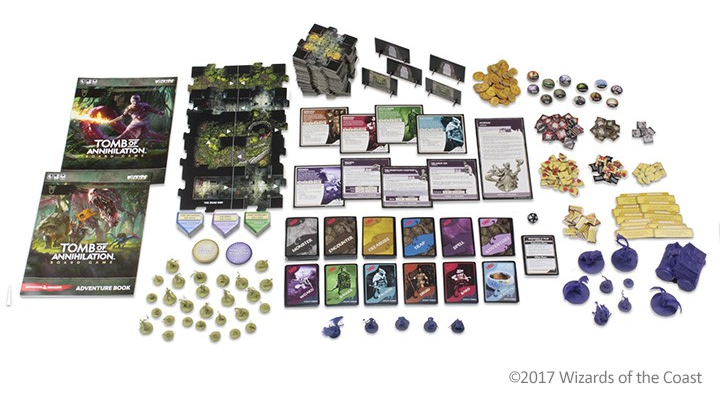 Comes with everything you see here. Not bad for a game under $60 these days...however...

But this is not a Wizards of the Coast product, and that is where Tomb of Annihilation stumbles onto its face right out of the gate as a Wizkids release. This is a pitifully produced board game that fails to meet the expectations set by previous releases in this series. Past sets had pretty decent miniatures and overall component quality; this set has some of the worst miniatures I have ever seen in a game put out by a major publisher. They are small, murky-looking, and brittle. There's not even a big, fun dragon or giant-sized monster like in the previous games. This time, you get a big stupid-looking Stone Juggernaut, which looks like a Mayan toaster with tusks. It's also particularly troubling that there's not a female character in the game- as the father of a daughter, I can attest that young girls especially value being able to identify with female characters and figures in a game such as this. The card quality is equally as pathetic as the figures, but the cardstock pieces are at least decent.

In terms of the illustrations, the character portraits are truly ghastly but there is a bright spot. The tiles in this edition look the best they ever have, split between the outdoor Chult jungle environment and of course the more dungeon-y tomb of the title. With all of the above said, it is important to note that this game is relatively inexpensive compared to its peers by as much as half the retail of similar titles. There is a more expensive premium edition with painted figures, but they are so bad I don't know that some Chinese factory paint jobs would help.

So, back to greener pastures (or undergrowth, as the case may be), Tomb of Annihilation offers up a great dungeoncrawler with minimum overhead, a reasonable playtime, and plenty of classic D&D flavor. It means a lot to me, a lapsed but longtime fan of the House That Gygax Built, that I can cast Cone of Cold and Melf's Acid Arrow on a Yuan-Ti or whatever other classic Monster Manual foe the game throws at you. The player-assisted AI system, which operates on a basic if-then triage, works well and it can really throw your party for a loop- or a TPK if the D20 doesn't roll your way. The trap counters from Elemental Evil return, and those are welcome, and the encounter cards actually might trigger a trap unexpectedly- this is a really cool touch, and it adds to the narrative when one of your adventurers bumbles through a tripwire and winds up KO-ing the bard.

Systematically, it still runs on a kind of super-streamlined 4th edition chassis. D20 rolls for everything. Your characters have an assortment of at-will powers (attacks and other actions) as well as daily and utility powers that can only be used once per adventure. Every time you explore a new tile, it may spawn monsters or other hostile elements. If you can make it through the scenario- whether it's picking mushrooms or overcoming a boss monster- you characters can spend money and level up. The campaign is built-in to the narrative and is pretty easy to manage. 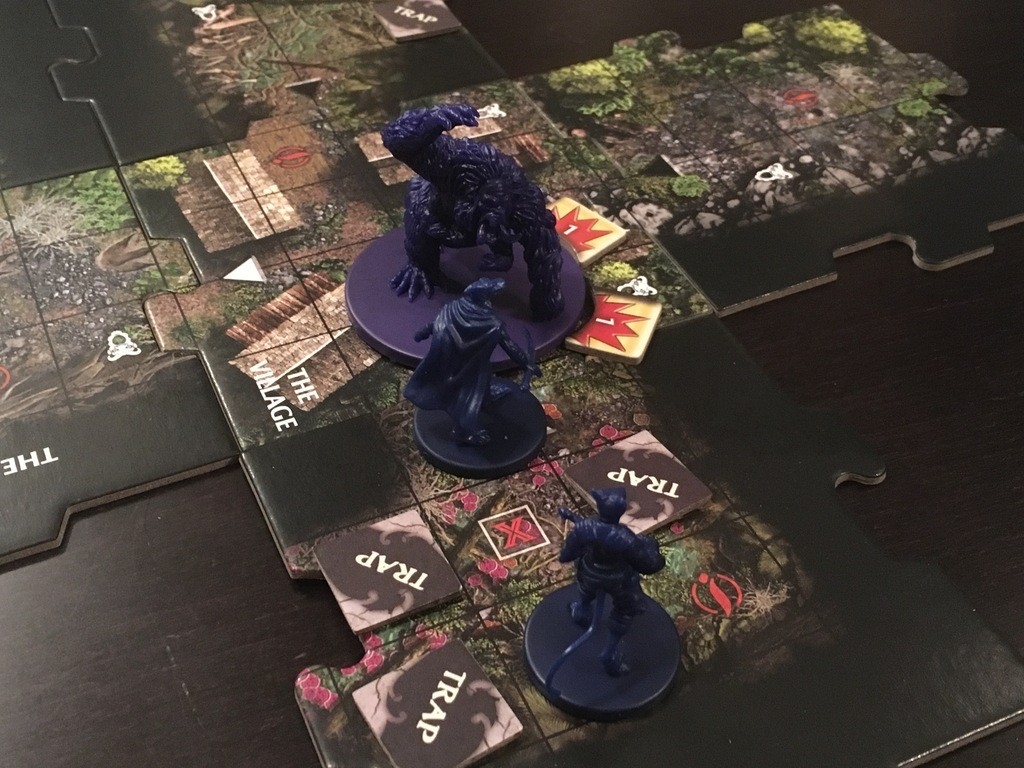 An ape man, a dinosaur man, and a cat man walk into a village...

As for renovations, there are a few but I'm not sure they are enough to put Kevin Wilson's name on the box as the nominal designer. The biggest change is in the way characters level up. Long gone are the days of flipping your character card if you roll a 20. Now, the campaign scales with the characters and the progression is gated at specific stages of the game. So you won't level up after the first scenario. This makes buying upgrade tiles- which change throughout the course of the campaign based on where your party is currently loitering- more important. Another scaling function is that the 5 XP cost to cancel Encounters (which can be a lifesaver) goes up later in the story. This is good, because I have traditionally found these games to be too easy in the later scenarios. I'm also pretty pleased with the new Spell deck, which is sometimes used by high-level adversaries to cast spells. This is a great add because it makes the most powerful enemies more unpredictable, and it also gives the heroes access to some great magic. I'm also fond of the new ambush spaces, squares on some tiles that are used by some of the encounter cards to surprise players with an event or a sudden rampage of Vegepygmies.

Sadly, all of the above isn't easily implemented with the prior games and especially in regard to Ravenloft, Ashardalon, and Drizzt. Between Drizzt and Temple of Elemental Evil, this system sort of went through an unadvertised 2nd edition evolution. So a lot of the best features aren't present in the older games, such as the trap tiles and the more sophisticated scenarios. I would very heartily recommend that players new to this system avoid the first three games and start with either Tomb of Annihilation or its immediate predecessor. With that said, the older games can be used with this one, and having those sets increases the number of characters, monsters and encounters you can bring to bear.

I'm rating this edition higher than I did Temple of Elemental Evil here in the Review Corner even though the changes are really quite minor and there could be an argument that not enough is done to renovate this aging system. All things considered (and looking past the production quality), this is the game I had hoped for back when the Adventure System series was rebooted in 2015. If Wizkids can get their act together with the quality control, then the next game in this range could be epic.