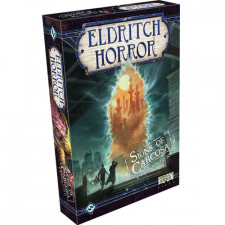 While Eldritch Horror is one of the best games FFG has published in the past several years, I canâ€™t help but feel that shoving the game through the companyâ€™s typical expansion release schedule has hurt its staying power. Eldritch Horror was a breath of fresh airâ€”a deeply narrative game that could be played out of the box without struggling with ridiculous, interwoven phases and sub steps of a playerâ€™s turn. Some complained about a lack of content in the base game, but one small expansion takes care of that problem immediately. So why does FFG feel the need to pump out both small-box and big-box expansions for the game with alarming regularity?

Well, because thatâ€™s what FFG did with Arkham Horror, so the developers simply carried that strategy over to its younger brother. But Eldritch Horror is a different animal entirely! Imagine, if you will, a world where Eldritch Horror got one, maybe two expansions, both of which were designed from the ground-up as game-changing, status-quo-challenging events, and not foregone conclusions as we now expect from the FFG expansion factory.

Instead, we have material like Signs of Carcosa, which is actually not a bad expansion. The writing is top-notch, the new cards are welcome as they plump up the decks, and the new Great Old One tries some new things. But is there any reason to get this over Strange Remnants, or Forsaken Lore, or any of the other small-box expansions that are sure to trickle out over the next few years? Well, not really. I would recommend it highly over the big-box expansions, as those tend to rip all the elegance I fell in love with right out of the game. 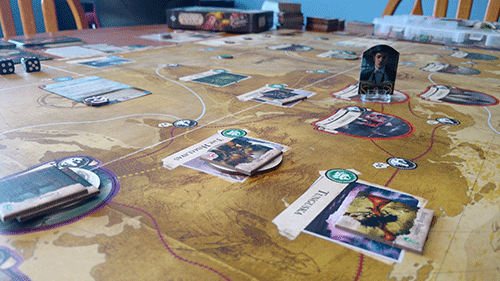 This expansion focuses on the new Great Old One, Hastur. Both the (new) Old One and the associated item, asset, and encounter cards tend to focus on poets, artists, and other creative folks and their decent into madness at the beckoning of the King in Yellow. This is certainly one of the strong points of this expansion, as the idea of giving each game session a different focus or approach is an interesting one, and playing against Hastur using the new, useful items is a unique experience compared with the more generic base game.

The expansion also emphasizes choice in its encounters, utilizing the pass/fail sections of its Encounter cards to let players pick a path and hope for the best. This is the best part of this expansion, and it does inject lots of replayability, letting you tackle obstacles in different ways.

With all that in mind, the current best strategy for getting into Eldritch Horror is to buy the base game, and one small-box expansion when youâ€™re ready for it. I have no reason to recommend Signs of Carcosa over the other ones. There is one small ding against it, and itâ€™s those infernal impairment tokensâ€”they were annoying in Under the Pyramids, and theyâ€™re just as bad here. Itâ€™s not a fun mechanism, itâ€™s not a novel mechanism. It just makes things more challenging for those who were asking for a way to ratchet up the difficulty.

Signs of Carcosa is still a solid purchase if youâ€™re looking to fatten up your Eldritch Horror card stacks, especially if you havenâ€™t picked up any of the small-box expansions so far. Just donâ€™t go in expecting anything game-changing, and youâ€™ll appreciate some of the new angles this one introduces.