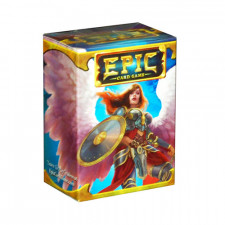 I'd like to tell you about my last game of Epic. My opponent was running a blue (Sage) and yellow (Good) deck, and I was rolling with green (Wild) and red (Evil). On his first turn, he played Inner Peace, a 1-cost Event that gave him +10 health, bringing his total from 30 to 40. I countered with Hurricane, letting me draw 2 card and increasing my future options. Next, he put out Warrior Angel, a 9/9 Good Angel Champion with Airborne and the ability to banish Evil tokens. Then came the kicker: since he had played a 1-cost Good card, he triggered Inner Peace's Recall ability, returning it to his hand. He could play this Event every other turn for the rest of the game, gaining 10 health before I had the chance to knock off 5. I was briefly able to counter this strategy with Soul Hunter, a 5/5 Evil Demon Champion that deals 5 damage to an opponent whenever it's broken (killed) and automatically returns to play at the start of my turn, but he used Transform to banish my Hunter and replace him with a 2/2 Wolf token. Four rounds into the game, I was certain it was a foregone conclusion. Four rounds later, I had him crushed; finally getting rid of that pesky Inner Peace with Guilt Demon, a 0-cost Evil Demon Champion with Airborne, Ambush and Blitz that banishes a card from any discard pile each time it attacks, I easily whittled down his remaining health with my Raging T-Rex, a 12/10 Wild Dinosaur Champion, using Necromancer Lord's expend ability to return his best defeated Champions to the battlefield under my control. Another typical game of Epic.

If you've been around a while, you'll understand Epic's concept right away: it's what Magic: the Gathering would be like if every core set came packed with Mythic Rares and you began each game with all your lands in play. There are no puny goblins or sellers of songbirds; you can field the 10/15 Airborne, Unbanishable Thundarus on your first turn. There's no mining your deck for that killer card; every card you draw might be your ticket to victory.

Of course, it's got a few other significant rules differences, but it's worth spending a bit more time examining this core conceit.

As sucky as it is to lose a match due to a random mana drought or flood, I actually like Magic's land/mana system. Sure, it can be fickle, but it also contributes a great sense of pacing and a dimension of strategy to the deck construction, forcing players to pack a balanced assortment of different-costed creatures and events (or figure out some other way to ensure consistency), and it helps draw-a-card and deck-mining abilities earn their slot. I like that quick-burn (aggro) and slow-growth (ramp) decks are both totally viable strategies under this system.

Epic's one-cost-fits-all formula means that such distinct tempos are absent, giving it a more casual, accessible feel even as the cards themselves are of increased complexity. Ironically, the fact that the most powerful Champions in Epic can be felled by a single Event makes these overbuffed cards feel just as expendable as a 1/1 zombie token. And since every one of the 120 unique cards has the potential to be the anchor to your strategy, skillful play becomes more about riding the ebb and flow of momentum and choosing, in the moment, which card will be your MVP and which ones you can treat as cannon fodder.

It isn't a total free-for-all, of course. Every card has a cost, either 1 or 0. As the rules explain this, each player gets a virtual coin to spend each round, but I prefer thinking of it as playing regular cards and free cards. You can play one regular card per turn, even your opponents', plus as many freebies as you desire. Of course, if you have a hand full of 1's, this can feel just as restrictive as the driest mana drought, but for the most part, it's a fast-flowing and lenient system.

Each card also has an alignment, from the four mentioned earlier, used to trigger abilities like "Loyalty 2," which adds a bonus effect if you can reveal two same-alignment cards in your hand when you play a card. Cards can also be split into Champions and Events. Champions are the creatures, heroes and monsters fighting for you; they have an offense and a defense value and remain in play until killed ("broken") or otherwise removed.

Events, meanwhile, are discarded right after their immediate, onetime effect. They can also be played at specific times on your opponent's turn or in combat, unlike Champions (except those with the Ambush keyword).

The rather obvious goal is to reduce your opponent's health, which starts at 30, down to 0, usually via unblocked attacks with your Champions. Like most games in the genre, attacking causes your Champion to expend (rotate sideways), meaning they can't be used for attacking, blocking or certain special abilities until the start of your next turn, when they Refresh. Champions also can't be expended for any reason the turn they're played, since they have summoning sicknâ€”I mean, they're "deploying." (Champs with Blitz ignore this.)

On your turn, you can declare as many or as few attacks as you'd like, each one using any combination of Champions available. For each attack, the opponent gets a chance to declare a group of blockers. This is a major departure from the way that other duelling game handled combat, one that further contributes to the immediacy of the action. Both attackers and blockers must be evaluated as a group, but as long as a single Champion blocks an opponent's attack, it can't hurt you, although the dueling Champions will often kill each other off if an Event doesn't get there first. Epic they might be, but they sure don't stick around long.

Both this and its more expensive predecessor are fun and engaging in their own way, but Epic is the one I'd introduce to my non-gaming buddies, and Magic is the one I'd spend dozens of years and thousands of dollars perfecting- if I were so inclined. The rulebook includes a menu of different ways to play (some requiring the purchase of extra sets) and build your deck (the creators focus on various drafting methods, although they do provide a few guidelines for constructed decks). If you're in search of a wizard's duel with a lot of whiz-bang special effects where your luck can turn on a dime, Epic is immediately accessible and sometimes satisfying spectacular. Its instant-gratification nature means it won't replace similar games for depth of strategy, but for the majority of players, the bang-for-your-buck of 120 overpowered cards for under $15 more than compensates.