I love escape rooms; Iâ€™ve probably visited over 20 actual ones. With the growing number of escape room board games, I wanted to explore those too.

Please note that the photographic coverage contains some minor spoilers, though I tried to minimize them. 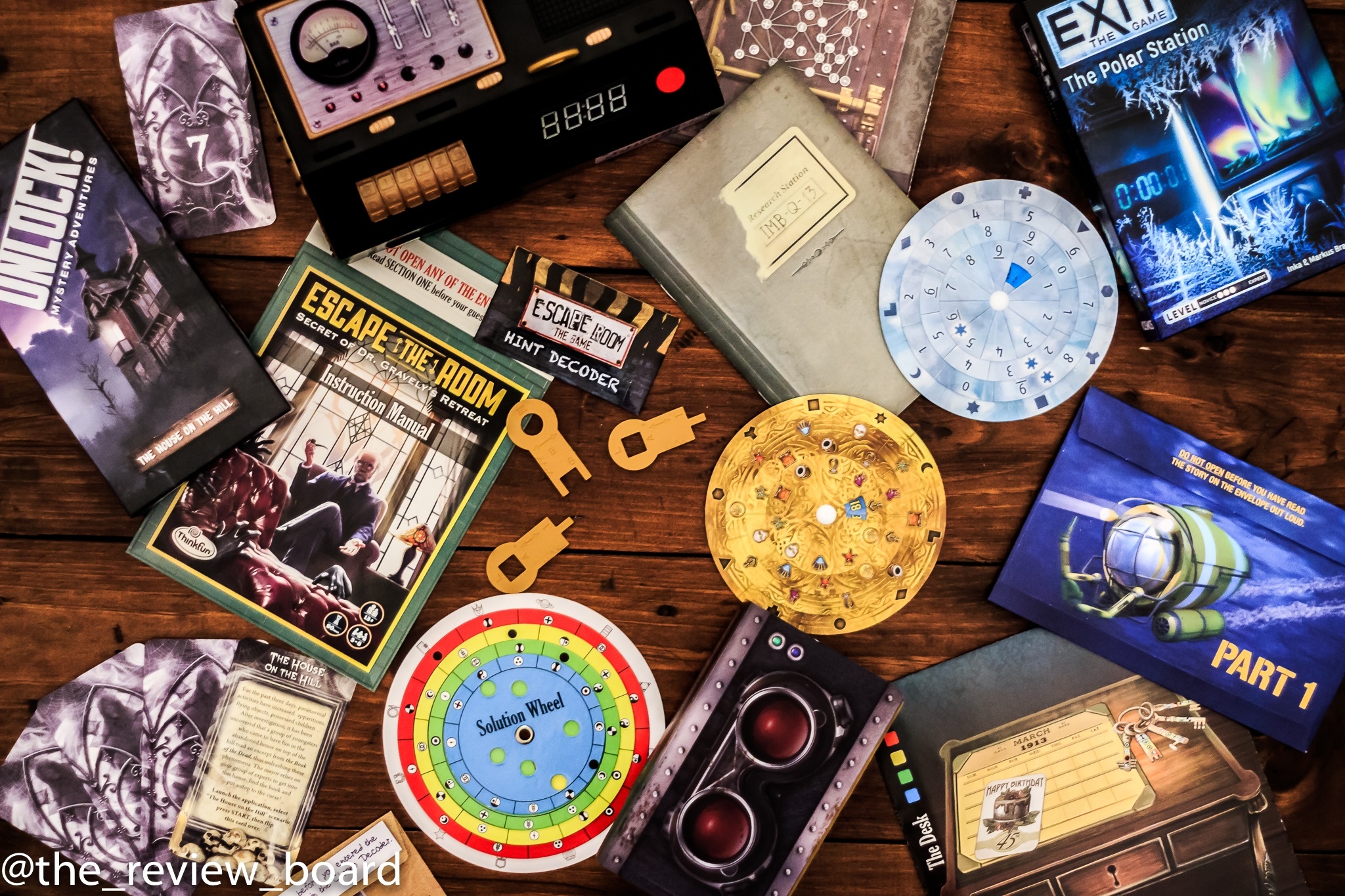 The following list of spoilers can help you decide if you should avoid any sections:
Unlock! â€“ The content of the first 4 cards of Unlock! Squeek and Sausage.
EXIT: The Game â€“ a picture of a single card from The Pharaoh's Tomb. The card doesnâ€™t show any riddles.
Escape the Room â€“ three envelopes from Mystery at the Stargazerâ€™s Manor (you see them when you open the box).
Escape Room the Game â€“ some content from the Virus scenario.
Escaper Room the Game: VR â€“ no spoilers

Now that weâ€™ve gotten this out of the way, let us begin!

The Unlock series has 6 escape rooms currently available, with 3 more scheduled to be released this year (Unlock! The Adventures of Oz, Unlock! Tombstone Express, and Unlock! A Noside Story).

These games are based on a deck of cards and a mobile app that is required to play the games. Players use the app to enter codes, get hints, and on rare occasions to interact with a riddle. 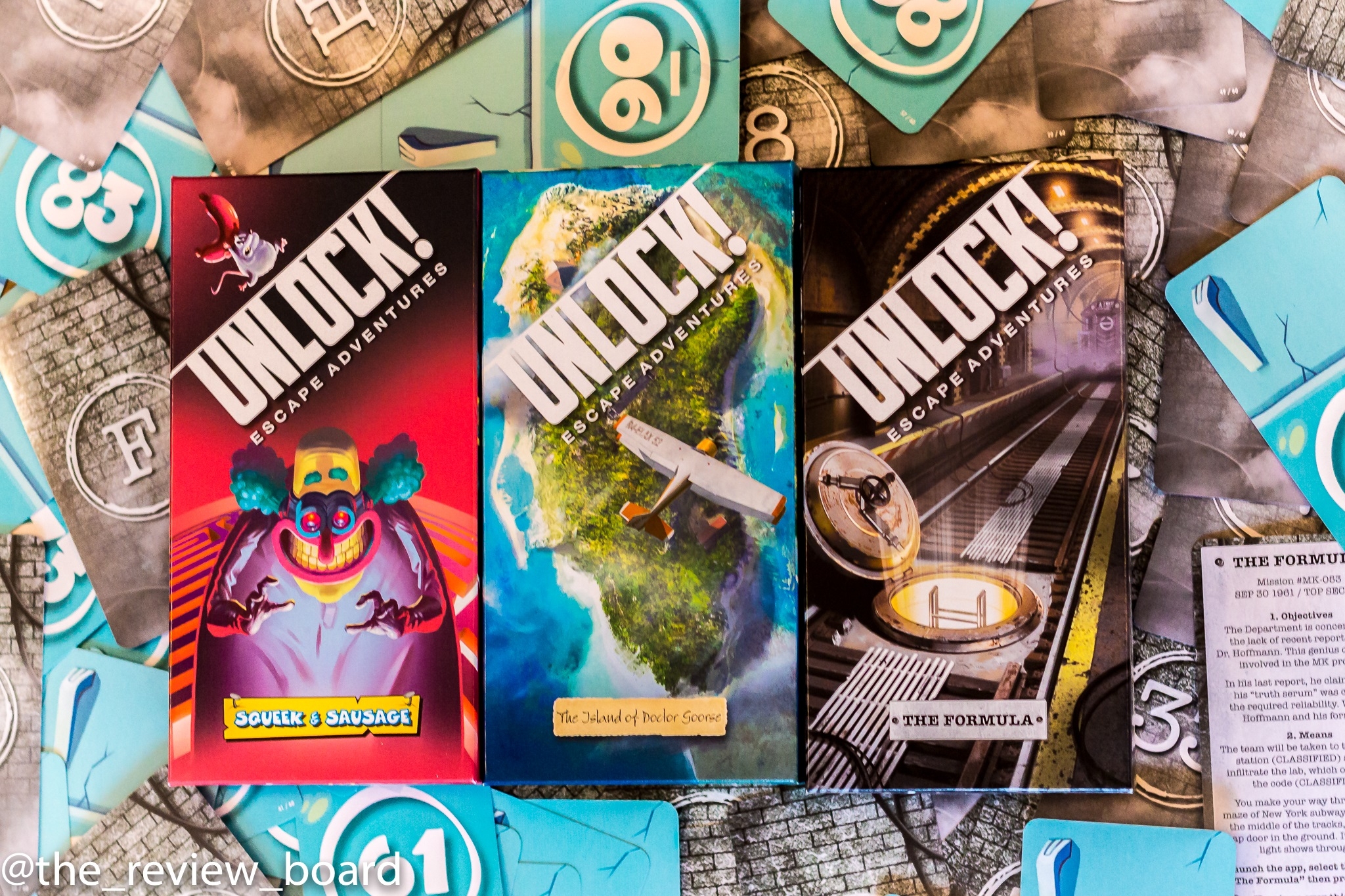 The deck itself acts as both the room (some cards show the room), and the items in the room, and the deck may instruct you to flip additional cards based on numbers and letters you find along the way.

There are different types of cards: red and blue cards interact with each other (you sum their values) to get a new card, green cards generate a number for you, yellows are for codes, and so on.

The deck also has some misleading cards, and punishment cards that will cost you time (measured by the application). 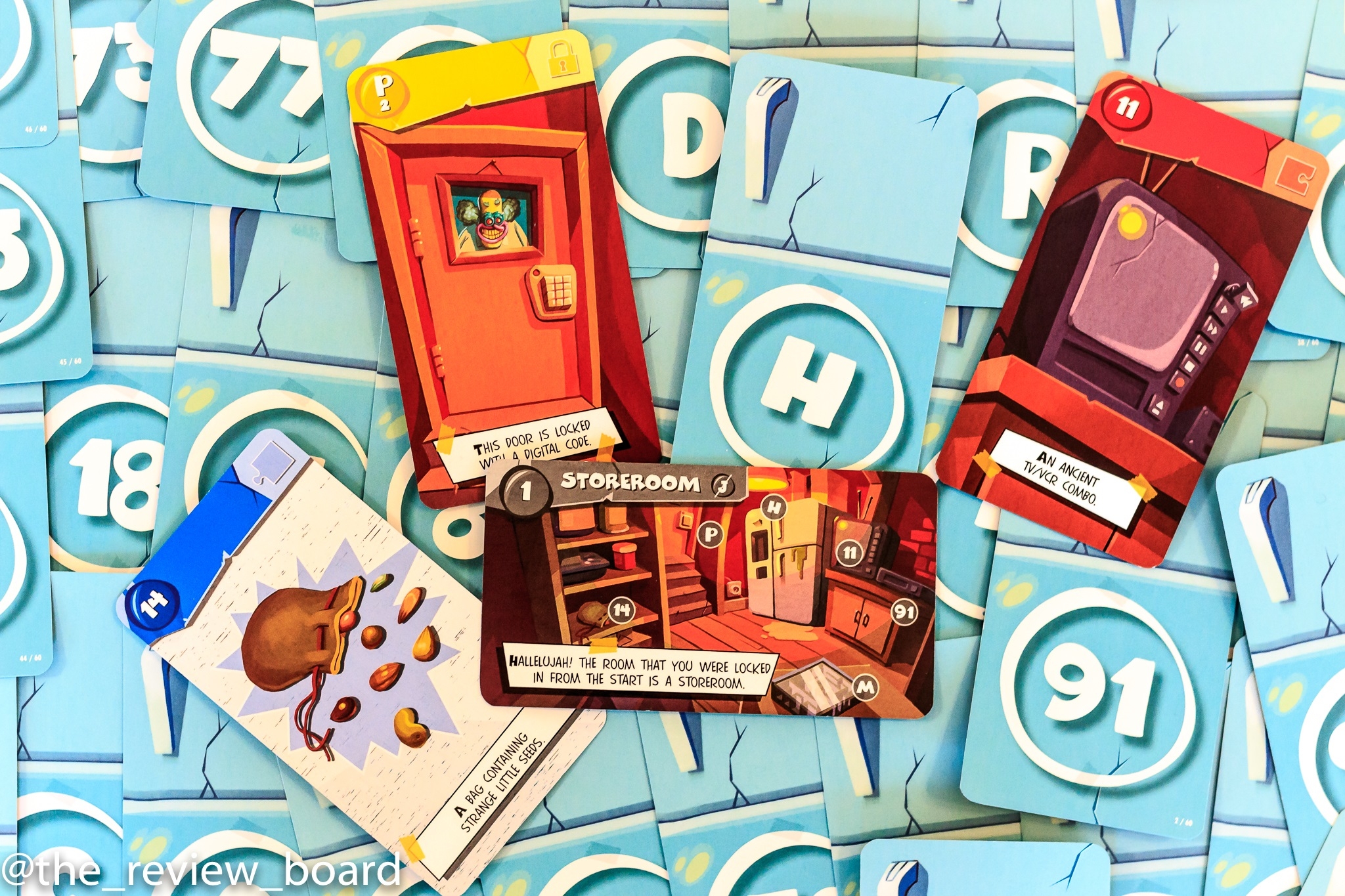 Unlock! doesnâ€™t quite immerse players in a way a physical escape room does, but it is still a fun and challenging game. Some of the Unlock! scenarios are harder, and going from a harder one to an easier one may be disappointing to some players. Like all escape rooms, the game is not replayable, but you can still sell/give away your old unlock! games. 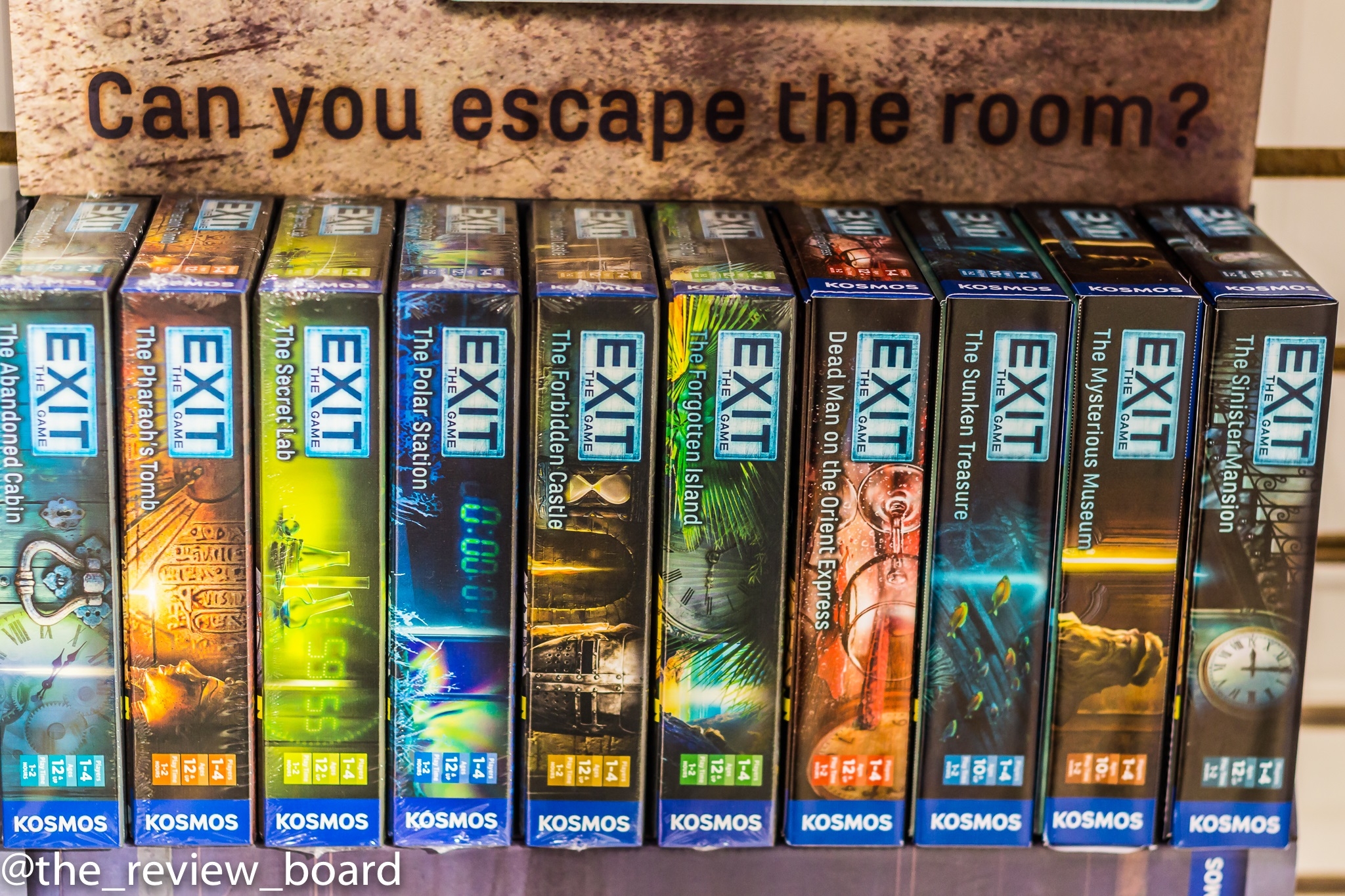 The EXIT games are based on a combination of cards, a booklet, and some components that vary from game to game. The deck of cards contains cards for rooms and riddles, as well as hints and solutions.

Players solve the riddles that are either on the cards or in the booklet, and check their answers using a solution wheel that leads them to the next card in the deck if the solution is correct. If players fail to solve the riddle, there is no penalty and you can just try again. 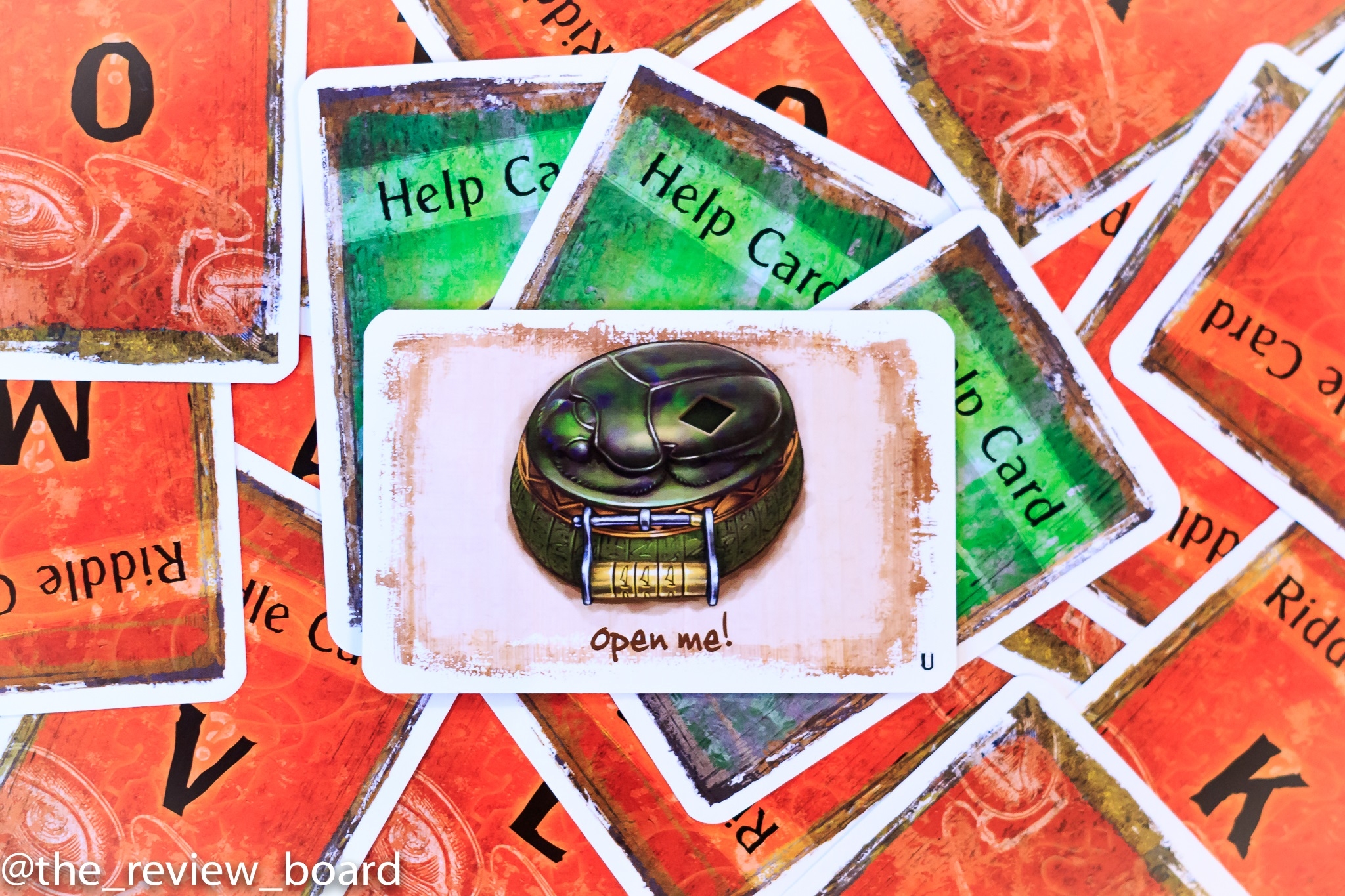 The EXIT games may involve some destructive game play, e.g., cutting or folding a component, which means that players canâ€™t sell their copy once the game is over.

The EXIT riddles are extremely challenging, different, and require a lot of out of the box thinking, and the interaction with the components makes the experience much more immersive than Unlock!. 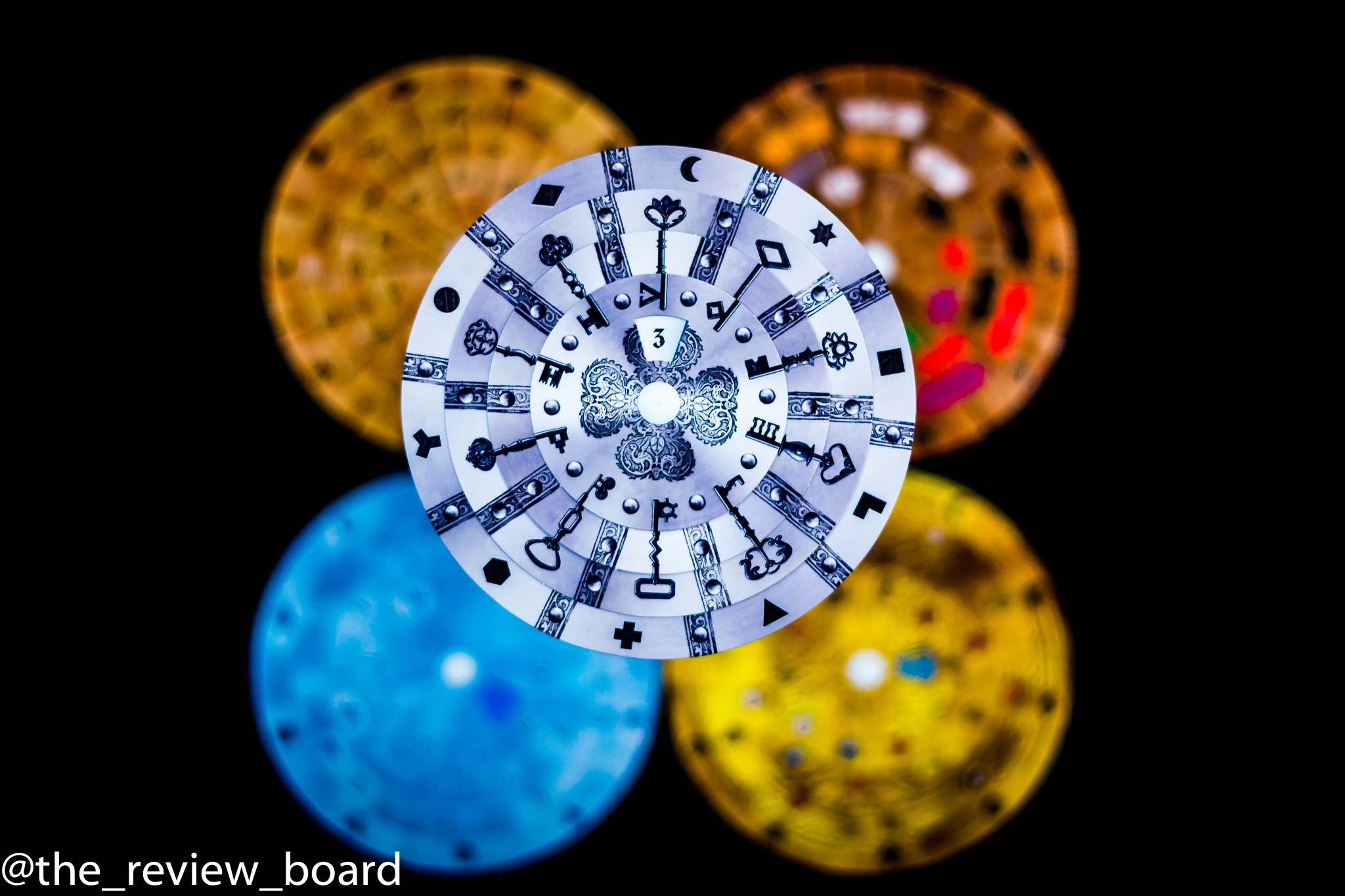 Has two standalone escape room games. The Mystery at the Stargazerâ€™s Manor and The Secret of Dr. Gravelyâ€™s Retreat. These rooms are envelopes-based, i.e., a riddle is printed on an envelope and if players solve it correctly they gain access to the content of the envelope that may contain more riddles and/or envelopes. 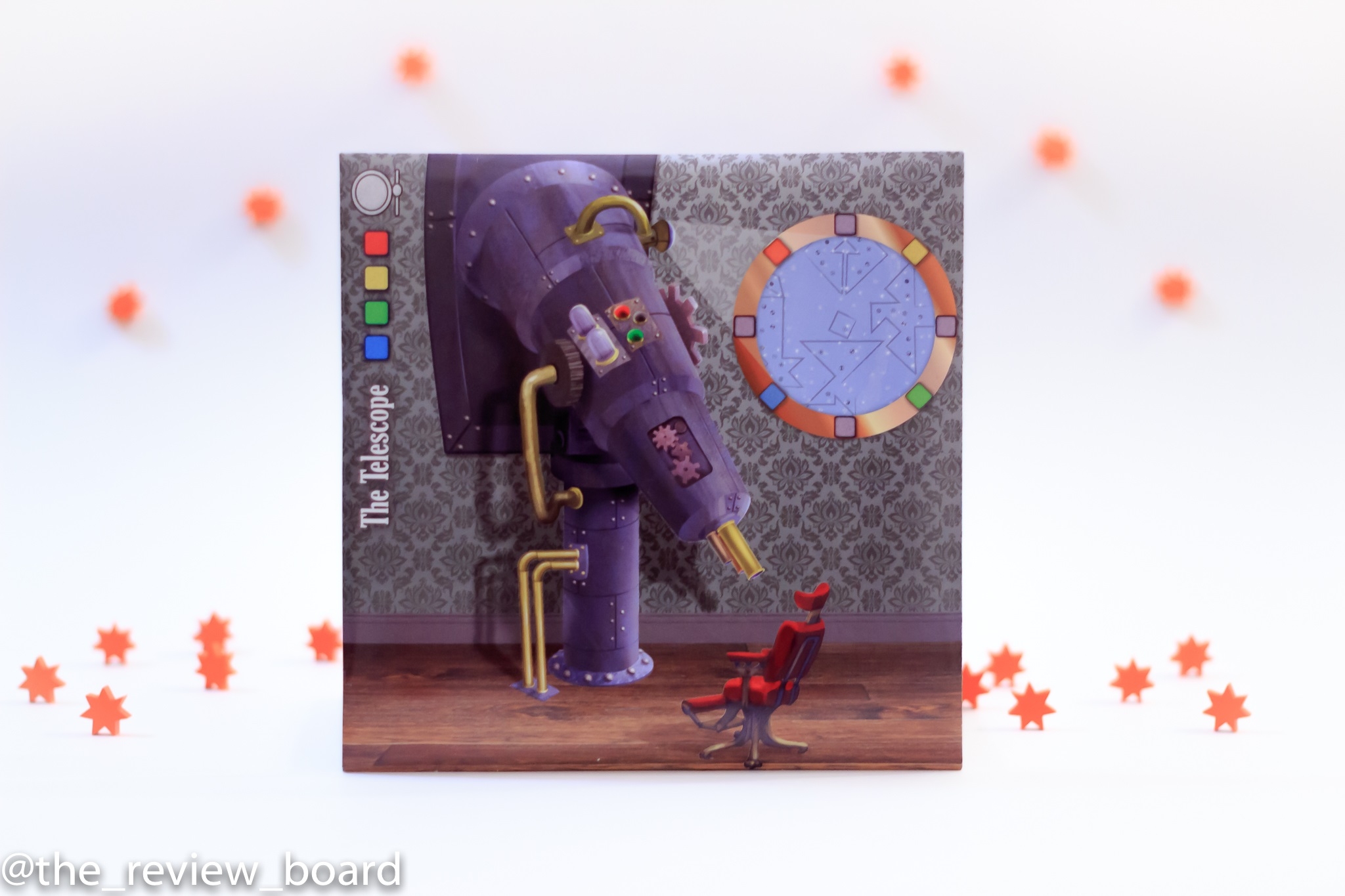 In Escape the Room, items are carried over from room to room, and an item that players find in a certain envelope may be used much later in the game. Therefore, players have to pay close attention to what they find.

Similarly to the EXIT: the game, this game also uses a solution wheel that tells players if they have the right solution for a riddle. If so, they may open the sealed envelope of that riddle; there is no penalty for a wrong answer. 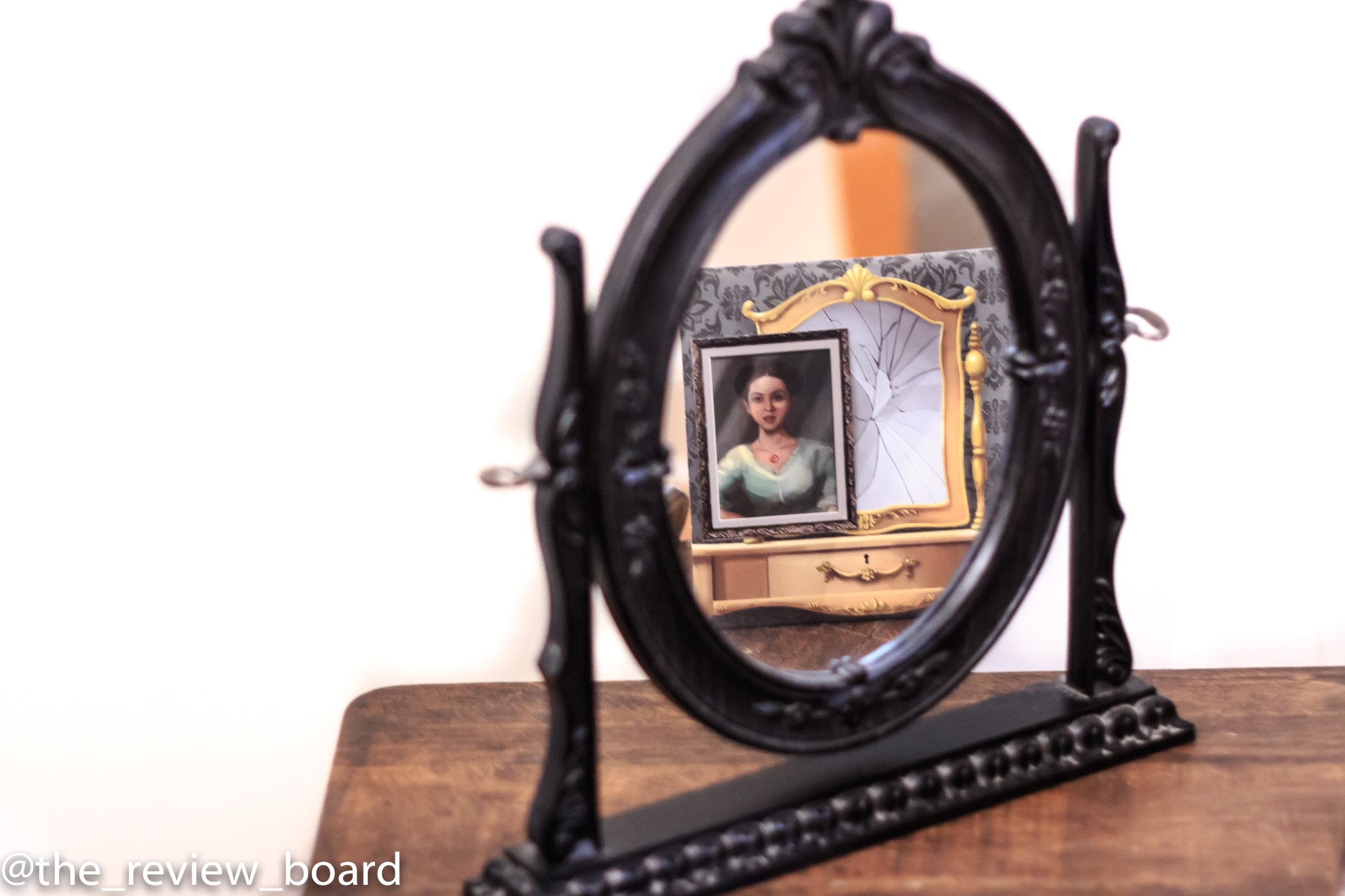 Escape the Room contains different components that are crucial for solving the riddles, i.e., there are many physical puzzles and players interact with the game quite a lot. Unlike EXIT: The Game, none of these interactions are destructive, and players can repackage the game once they are done.

The experience is much more immersive than Unlock! and the game is entertaining, but the riddles are a lot easier. The game suggests two hours for 3-5 players, and we escaped in 45 minutes with only two players. I think Escape the Room is great for beginners, and can easily work with 2 players. 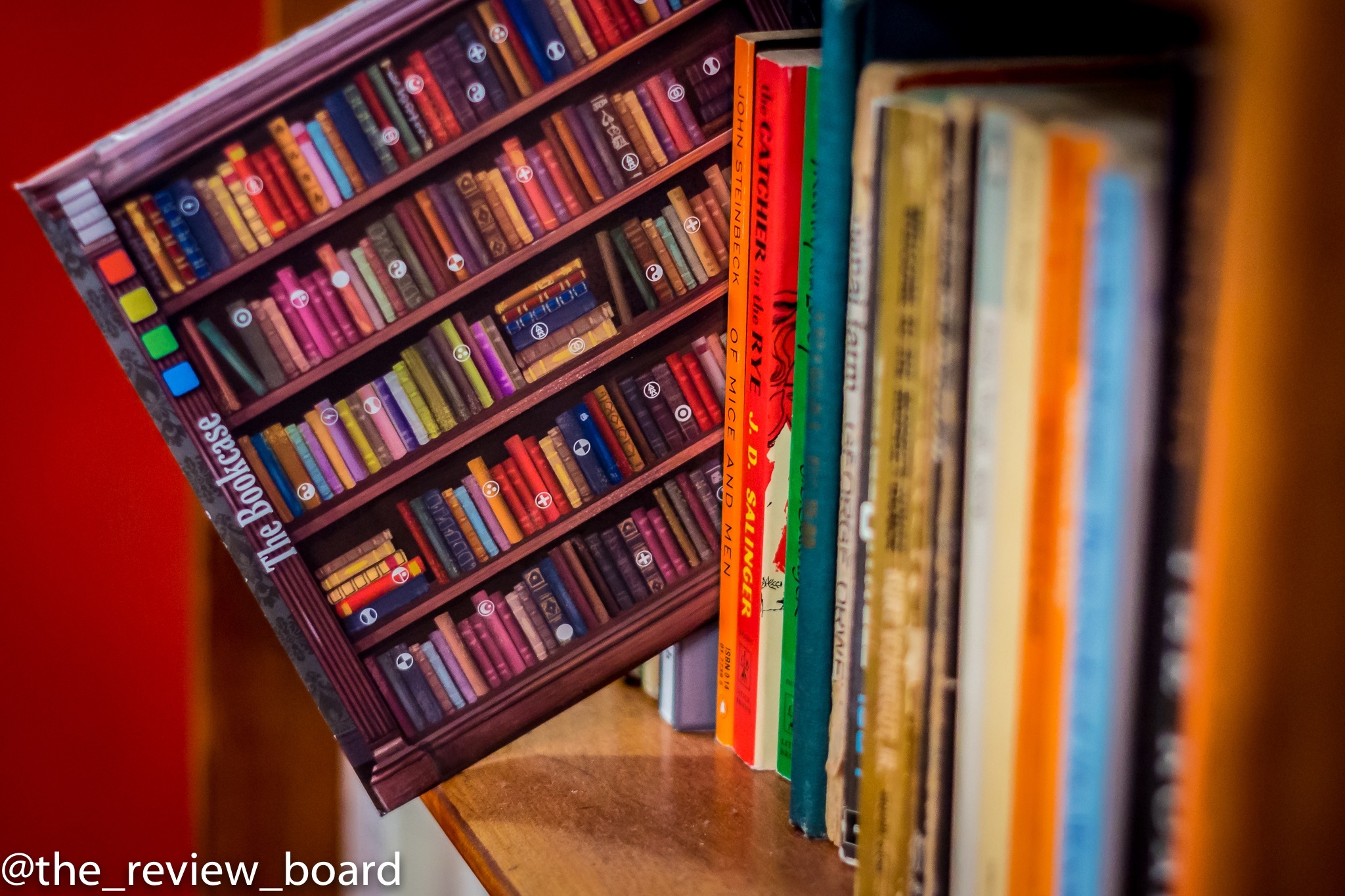 Escape Room the Game comes with four different scenarios (more are available) with different levels of difficulties. The star of this game is the Chrono Decoder, a big scary box with a 60-minute timer, slots for 4 different keys, and several parts that may assist players with some of the riddles. 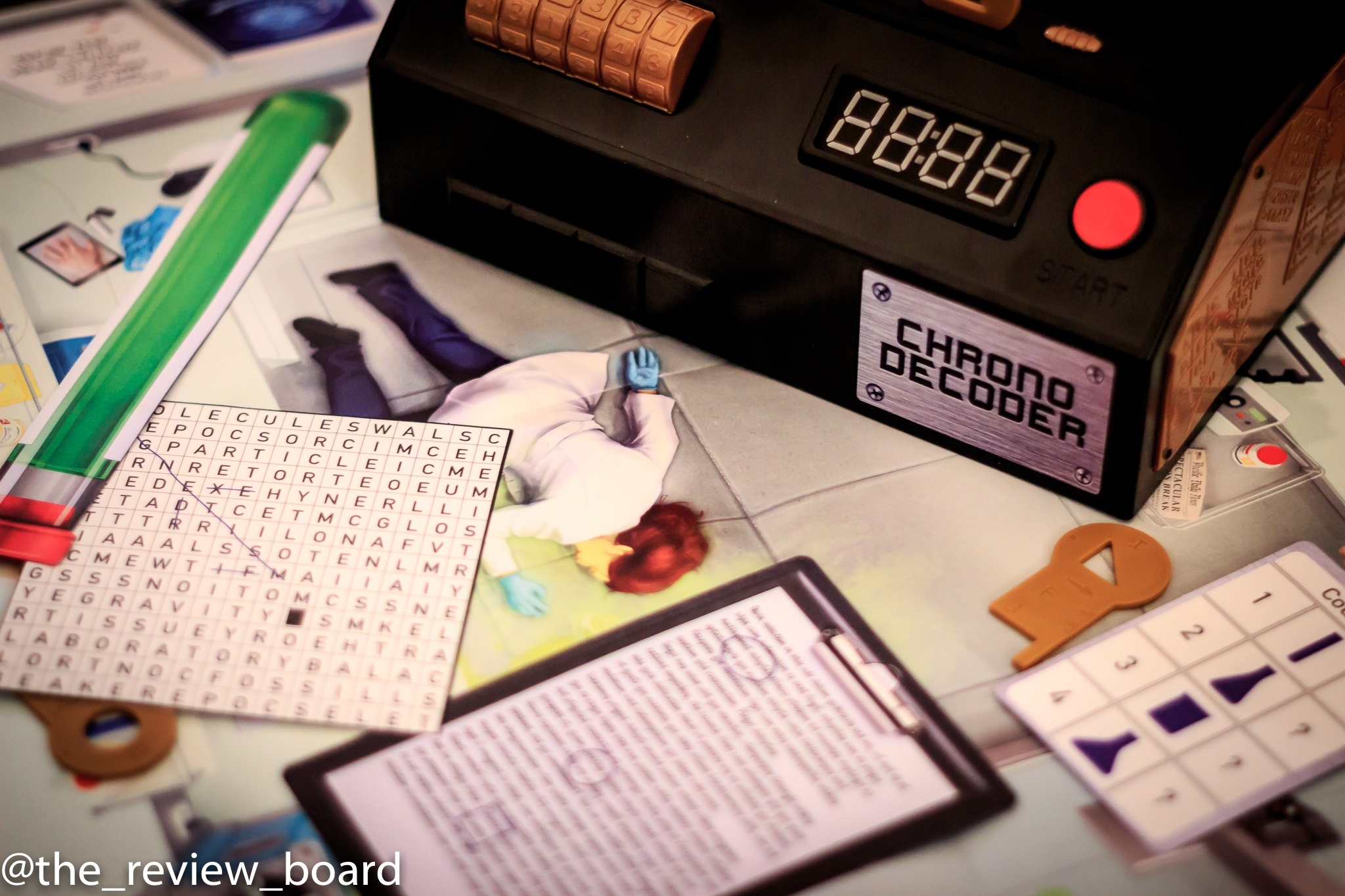 Each scenario comes with 3 different envelopes that contain riddles, items and in some cases prints of the room players are currently in. When players find the right 4 key combination and insert the keys to the decoder they are granted access to the new envelope. If they have the wrong sequence the decoder will take some time off for that mistake.

The keys are engraved with many shapes, numbers and letters, which means that codes are not limited to four digit numbers. 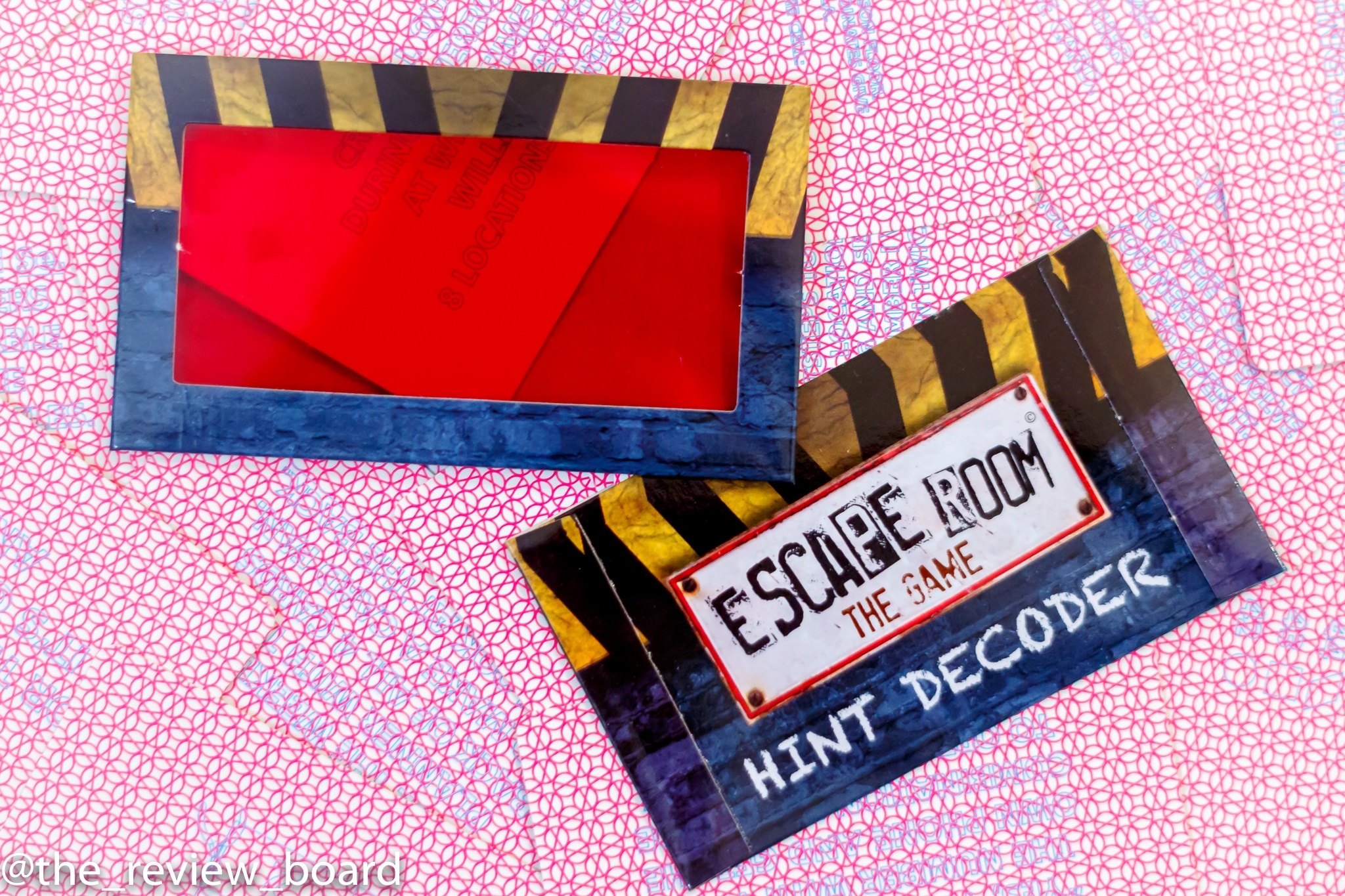 The scenarios also come with hint cards that can only be used at certain points in the game, e.g., players can access a hint only when there are 45 minutes left.

The game requires some physical alteration of some components, but players can re-print them. Since the Chrono Decoder is needed for the other scenarios, it is unlikely that you will sell this game. 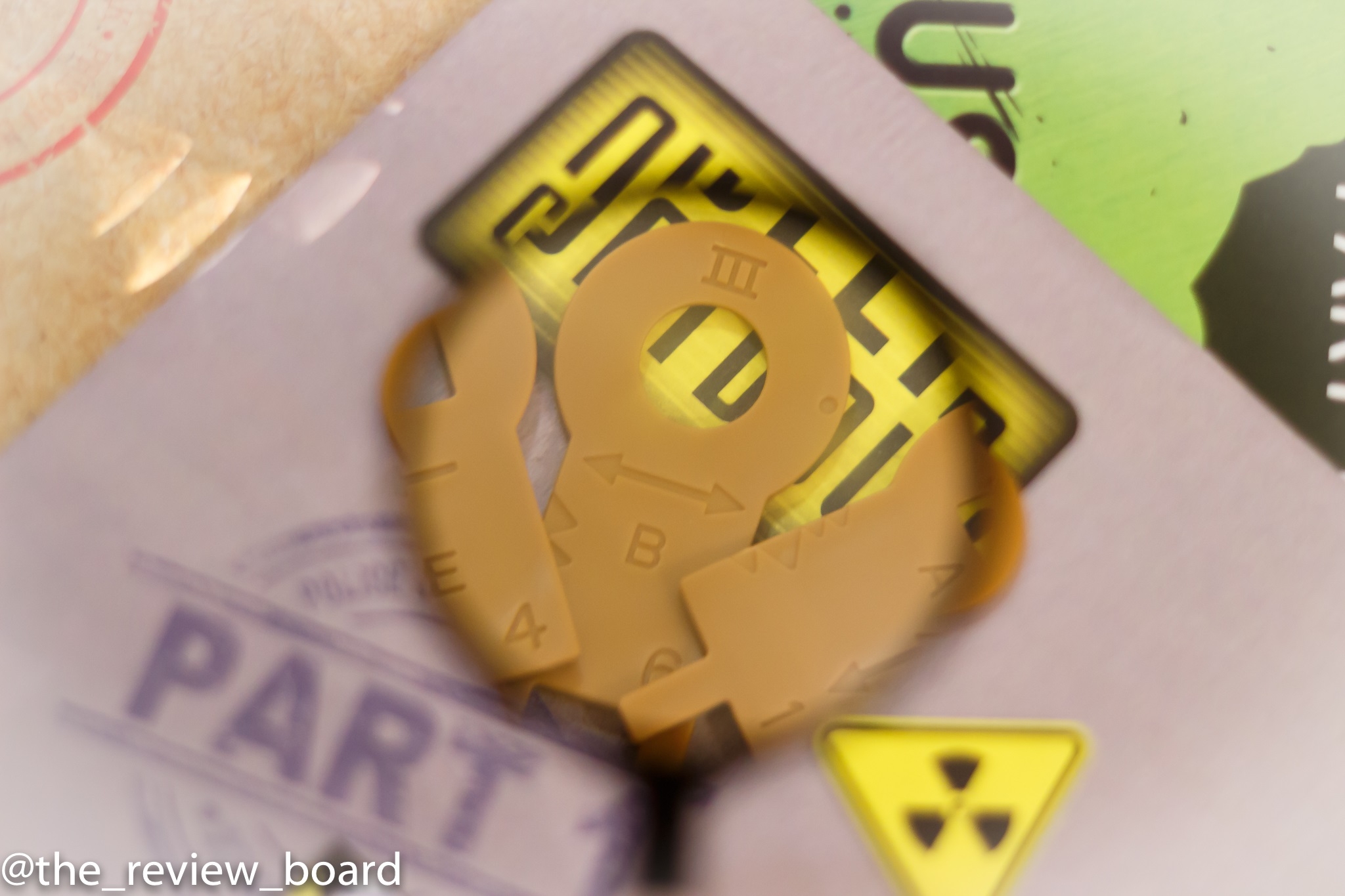 Escape Room the Game provides the most immersive experience out of the games Iâ€™ve discussed thus far. The interaction with both the riddles and the keys mimics the sense of urgency a really escape room has, and gives players a fantastic experience in their own home.

This is a standalone expansion to Escape Room the Game, and can be played either with the Chrono Decoder or with a mobile app. 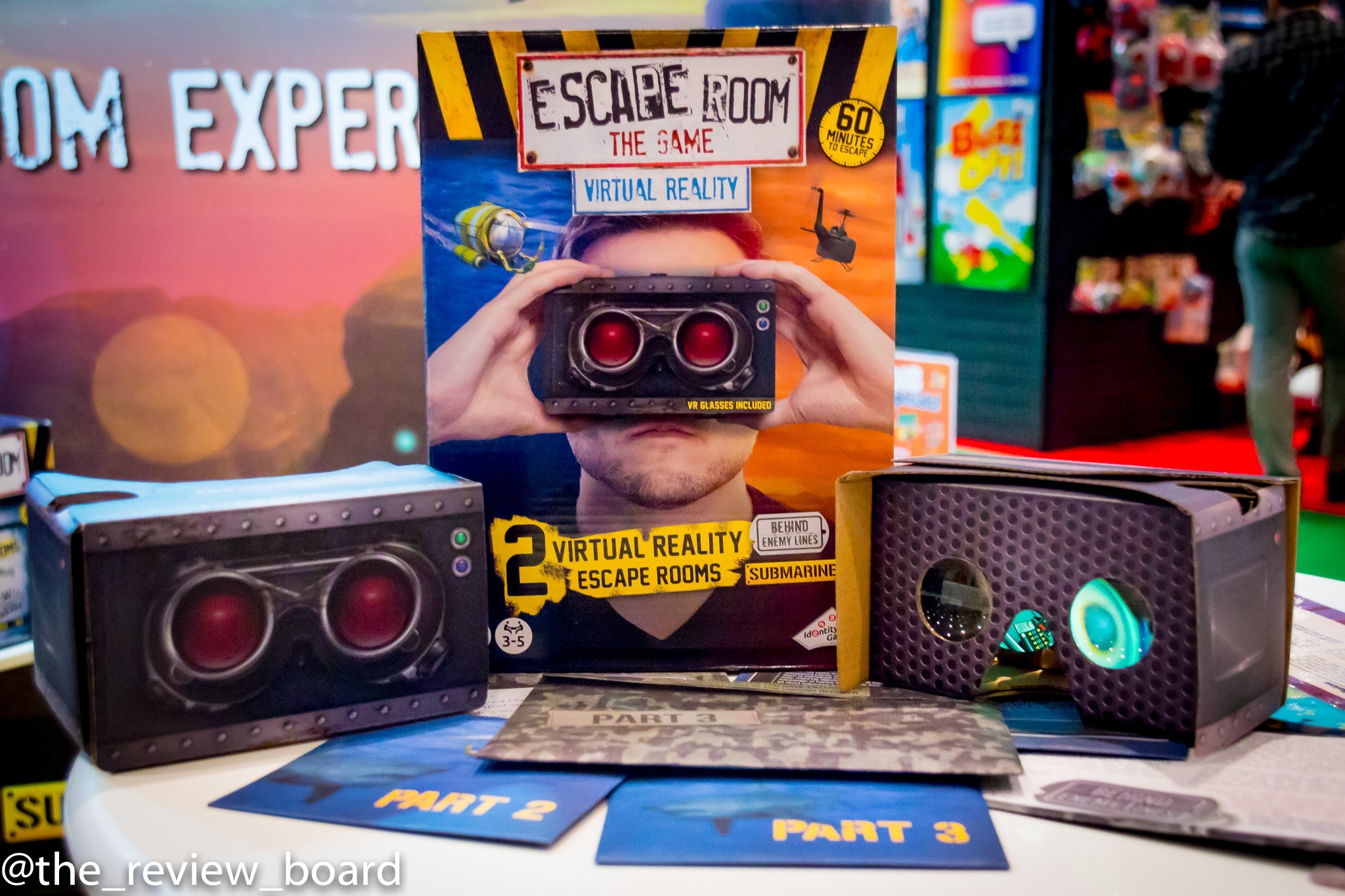 The game comes with two additional scenarios (Submarine and Behind Enemy Lines), but unlike the previous scenarios in which all items needed for the adventure are in the envelopes, in this version players have to use a virtual reality app that takes them into the room!

Players work together to look inside the room and interact with different items in the virtual room in order to solve different riddles.

This additional aspect makes the experience of Escape Room the Game unique and extremely immersive. 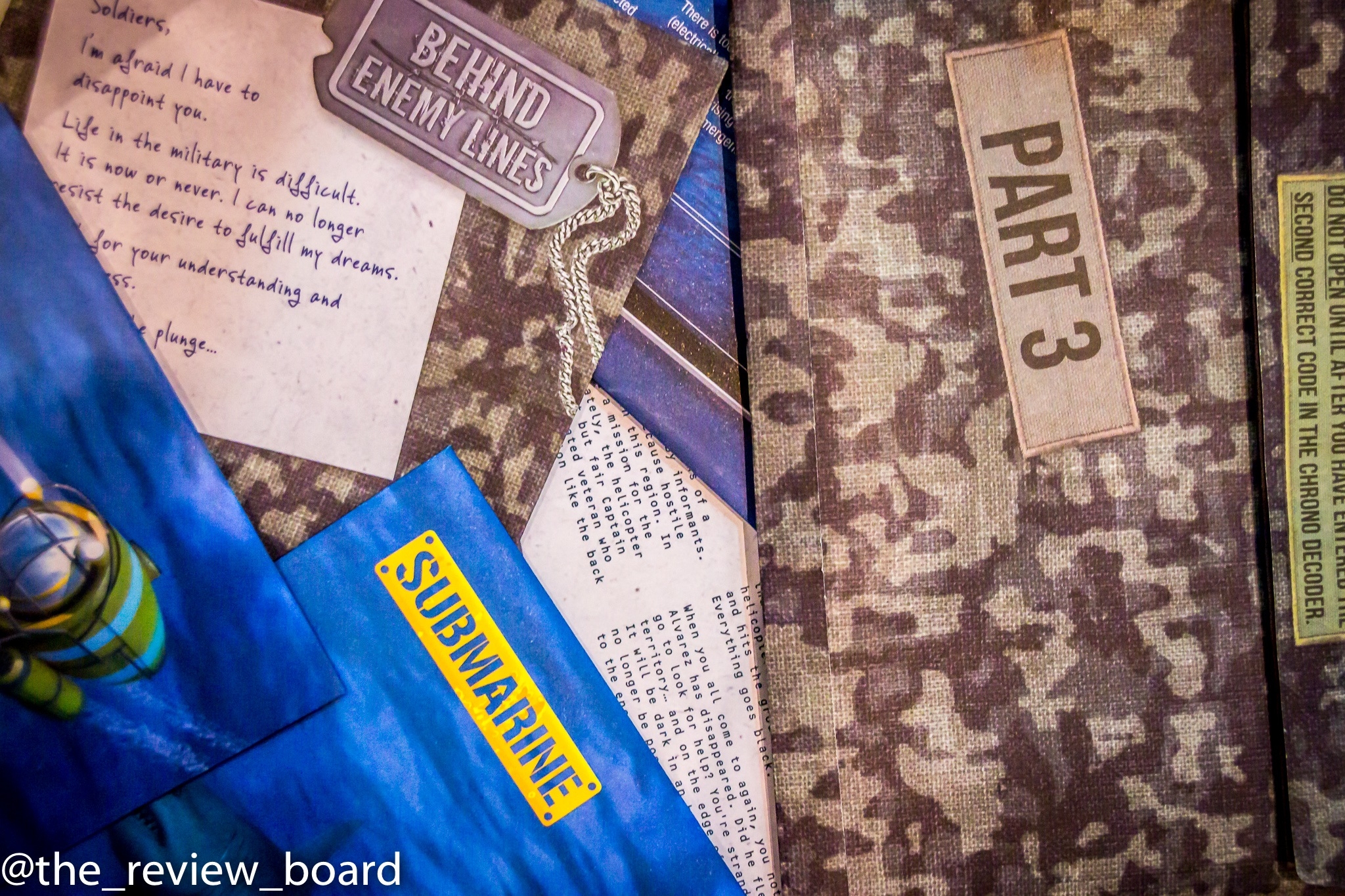 Given how many rooms currently out there, I hope this article helped you find the right room for your group. Escape the Room is for beginners; Escape Room: The Game has the most immersive experience; EXIT has the most challenging riddles, and Unlock! has good riddles that are not as hard as EXIT.

Please let me know if you have any question or comments, or if you think I should check any additional escape rooms that are out there!