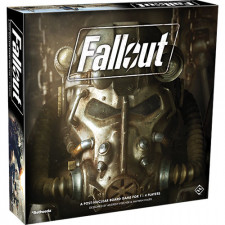 KM: My first reaction as I step out into the radiation-covered wasteland is that I couldn't believe this game exists: a full-blown Fallout RPG on the tabletop. Complete with branching quests, character advancement, and warring factions of varying shades of gray, Fallout is an ambitious project that draws you into its rich and intricate game world, even though it occasionally stumbles into a Deathclaw nest of wonky game design. For me, though, the sheer ambition and joy of exploring every nook and cranny of the Wastelands more than outweigh the head-scratching moments of how certain elements of Falloutâ€™s design made it past the playtesting phase.

MB: I agree with all of the above and I would also add that I think this is an especially compelling adventure game design- the narrative is quite strong, itâ€™s much more than the typical â€œflip a card, roll dice at itâ€ affair and the designers have paid lavish attention to the specifics of the Fallout world. Just like in the games, you wind up as a Yojimbo-like figure torn between warring factions - and picking up lots of junk and drugs along the way. So I think this game is very, very good with one major caveat - almost everything to do with how you actually win the game is completely screwed up.

KM: Donâ€™t be so dramatic, Barnes. Yes, itâ€™s a little wobbly, like that bad shopping cart you inevitably select out of a sea of good ones on your way into Walmart. Agenda cards are strangely imbalanced, and made worse by the fact that you can double up on a particularly good one, abruptly ending the game (and the fun) for everyone else. And sometimes quests will pop up close enough for a player to grab with a quick action or two, while others will remain far out of your reach. 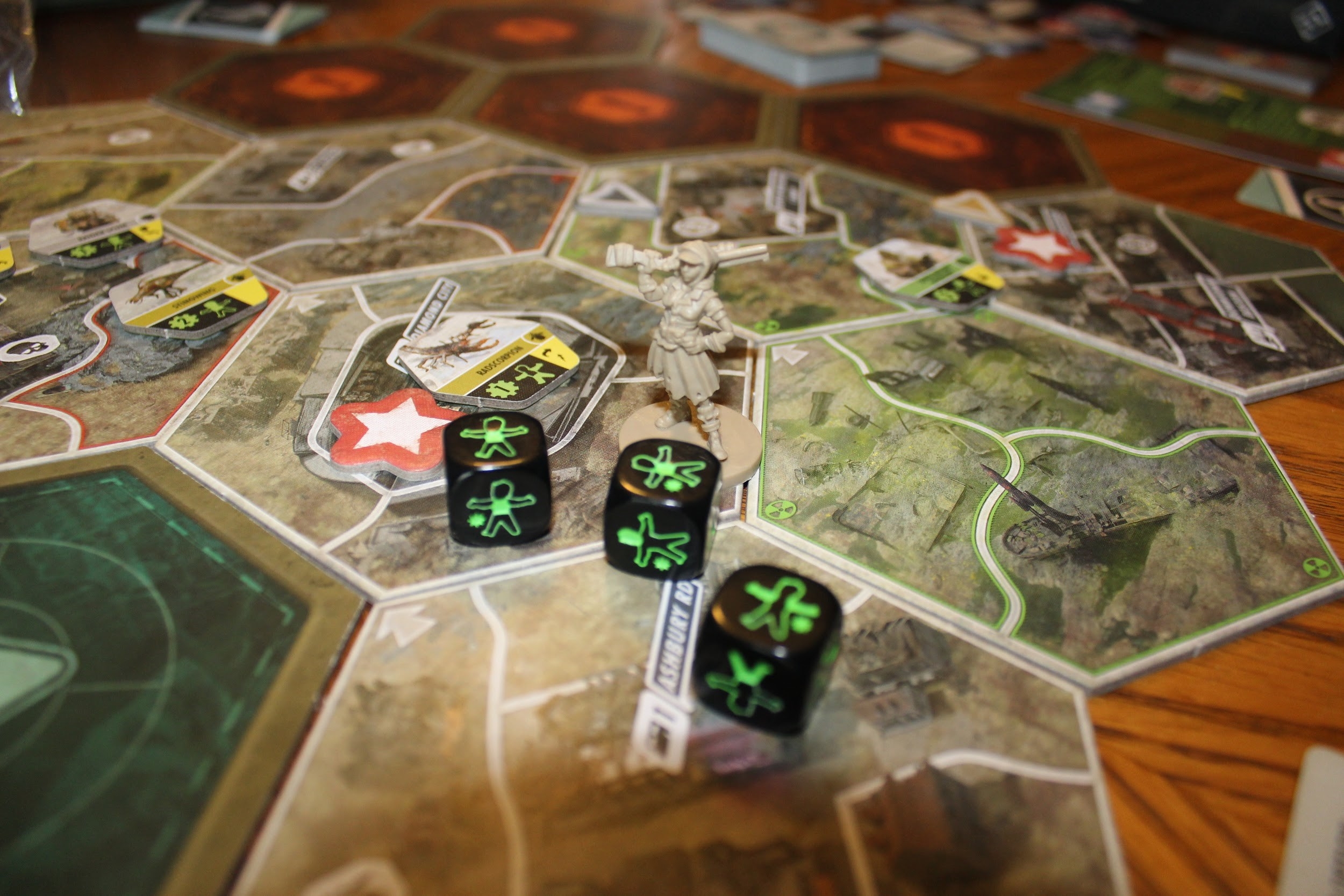 Civilized society in 2017 may have its share of problems, but at least we donâ€™t have radscorpions.

MB: Hereâ€™s one of the problems. You can either struggle through an adventure that requires you to make it through a gauntlet of several stages of a narrative line, making the right choices, having the right things, and making the right die rolls. You get an influence card that may or may not be as valuable as another. Or, you may wind up with a really easy quest- like â€œexplore a tileâ€ and you get the same reward for a fraction of the work - and time.

But whatâ€™s more troublesome is how the endgame is solely dependent on moving two faction sliders to reach an endgame. If you have the right influence cards, they may be worth more. But you arenâ€™t really empirically rewarded for declaring loyalty to one or other. Whatâ€™s worse, the game tends to end before the actual narrative line does. Itâ€™s a letdown to end such a strongly story-driven game with some fairly arbitrary points deciding the winner.

With that said, the adventuring is great, and you can totally get sidetracked into branching quests. There are almost always at least two ways to go.

KM: Right, if youâ€™d rather, you can just ignore the goals and wander off in search of adventure. Itâ€™s otherwise such a great experience that frankly I donâ€™t care if the other guy nabs more influence than I do, because Iâ€™m enjoying my comedy of errors through the green glowy wastelands. This is a terrible excuse for the game, I know, but Iâ€™m also entirely confident that FFG will put out an expansion for $39.99 that will replace the agenda deck with something that was actually playtested. In the meantime, however, itâ€™s still such an ambitious, stirring experience that the flaws really donâ€™t bring the experience down for me at all.

MB: The playtesting question- and the bugs- are really another Bethesda thing though, arenâ€™t they? One thing that I think is buggy is the multiplayer game. Mainly because I strongly believe that this game was designed as a solo thing. The multiplayer elements are negligible and feel forced. But then there are quests, events and resolutions that donâ€™t really work solo. So at times I sense a conflict in the design.

KM: Yeah, youâ€™re essentially playing separate games and racing to the finishâ€”but isnâ€™t that true of most of these Runebound-style adventure games anyway? The pressure the other players apply on you to complete your factionâ€™s quest goals before they complete theirs is what drives the game forward, while in the solo gameâ€™s itâ€™s a much more mechanically timed affair. Sprinkle in the crazy, dynamic events that pop up along the way, and it becomes an enduring shared story youâ€™ll reminisce over with your gaming pals.

Iâ€™ll give you an example: in one 3-player game, I was aligned with the Railroad while another player declared for the Institute, with the final player just wandering the wastelands and completing side-quests. The Railroad player stormed off to the far side of the map to complete a quest, while the Institute player was tasked with something completely different to finish off the card and earn points for his faction. The Institute player started searching a city and decided to kill off a random scavenger.

A few turns later, heâ€™s getting close to finishing off his objective, when law enforcement shows up, having heard of his cold-blooded murder, and gets into a firefight with him, incapacitating him long enough for me to finish off the quest. Meanwhile, the third player was hatching a crazy plot to unlock a mysterious vault all the way across the map. Was every one of us involved in every little part of that story? Of course not, but it drives home the feel that weâ€™re in a living world. Itâ€™s exactly what Iâ€™d want some kind of massively multiplayer Fallout to feel like, with lasting consequences and competing objectives, rather than the static feel of many MMOs where youâ€™re all heroes completing the same quests over and over again. 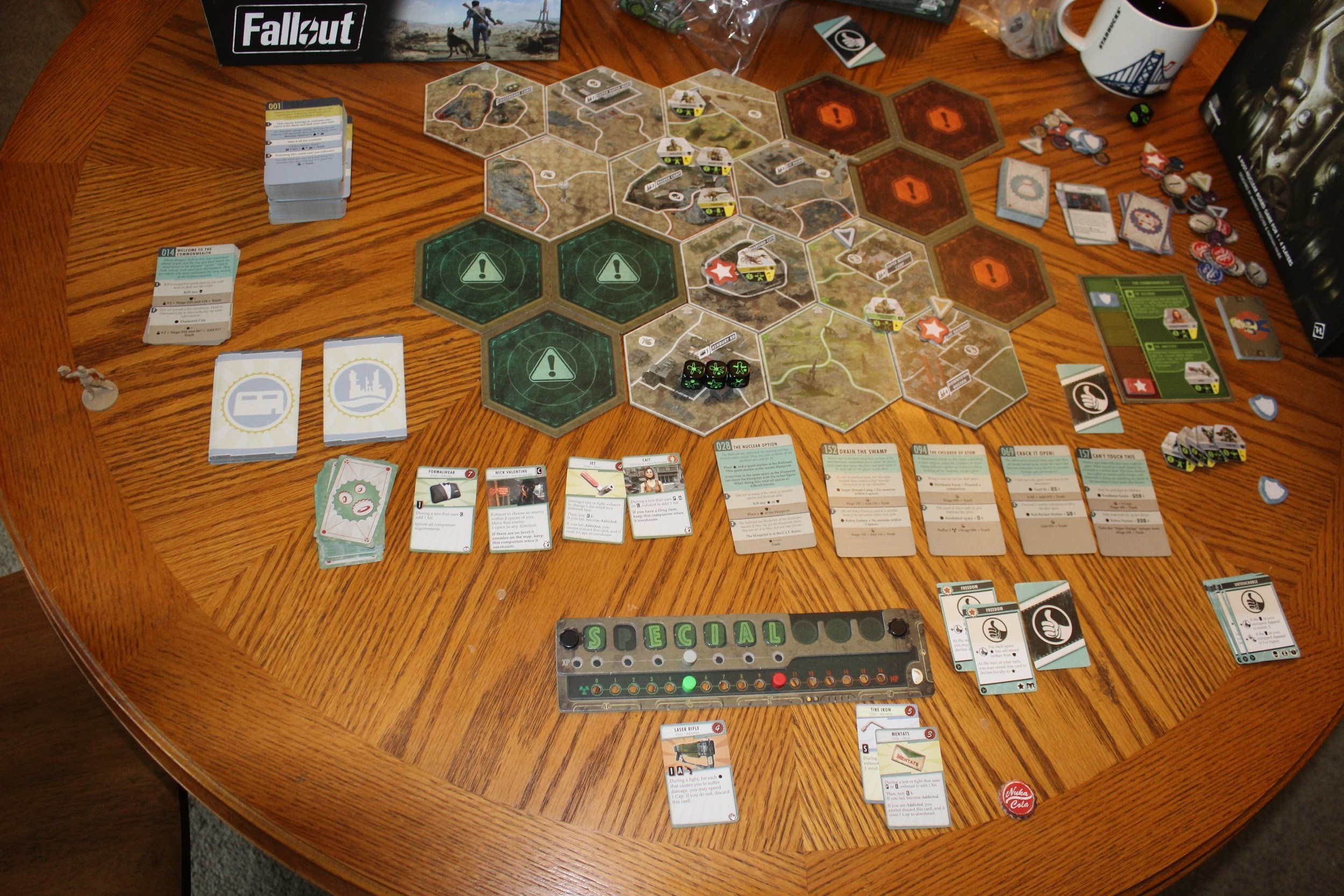 MB: Iâ€™ve got my own stories like that as well, my favorite being the one about the Ghoul who took some experimental drug and turned into Supermutant, then went and killed a bounty hunter terrorizing a Ghoul community. Then he freed the slaves from the Pitt. Sort of an origin story, I suppose.

What we are both getting at here is that this design totally nails the concept of player-directed, emergent play in an adventure framework. It does this possibly better than any other game I can think of, including Merchants and Marauders, the previous champion in this area. Make no mistake - the flaws are worth it because the good things in this game are really, really good. And I am far more forgiving of flaws when a design takes chances, commits to its concepts and pushes in new directions.

And I do think that this game is mechanically quite novel- it's rare to play an adventure game anymore that feels fresh but this does. Iâ€™m especially fond of the dice system, which brings the VATS concept to the table, and the S.P.E.C.I.A.L. leveling is just brilliant- I love choosing the perks and the simple sense of progress. All of the core mechanics and processes are top notch all the way, including the simple AI for the enemies. It's all quite compact and easy to manage.

KM: Yes, too many of these games get bogged down in horrendously complex combat resolution and minutia-driven leveling systems that really donâ€™t make the game any deeperâ€”just more cumbersome. Fallout knows that youâ€™re here for the story, and it makes everything else simple and easy to understand. You donâ€™t know how refreshing it is to play a game in 2017 that has but one round of dice rolls for combat resolution in order to calculate both your own attacks and your opponentâ€™s. Roll them bones, modify â€˜em if you can, and move on. Simple.

MB: It manages to be really direct and easy to handle while still hitting the key Fallout concepts- this is no small feat, and itâ€™s always in service of story. This is one of the reason I love it solo- itâ€™s super easy to play, but you still get a full RPG style story and character arc with leveling and everything.

KM: As you mentioned, the leveling system here is interesting in that you can gain XP from a few different sources and have some control over what areas you manage to level up. Occasionally getting the choice to snag a sweet, one-off perk rather than the usual stat boostsâ€”which simply give you re-rolls and help with certain kinds of testsâ€”means you can shape the way your character evolves and play the game your way. We had a guy in one game who desperately wanted a gun (which are notably scarce for a Fallout game). So, he went for a gun perk when given the opportunity and was able to trade it in for a laser rifle. This kind of personal customization is evident throughout the design.

MB: I played 4 games before I laid hands on a gun! And Iâ€™ve found items like the Eyebot more useful than a weapon- I love that the game has adventures that are not just â€œflip a card, defeat an adversary.

So winding this up, I think we are mostly on the same page here but Iâ€™m coming in a little lower than you, Kyle, because I do think the endgame is problematic- but there are elements here that I feel are just about five star caliber. I think that in the end, this is an excellent game that is both unusually compelling and straightforward in its genre. I canâ€™t help but wish that the ending was firmer and that they had committed to a purely solo experience (because it is superior), but this is one I keep coming back to play again and that says a lot.

KM: Sure, and this game certainly is odd in that you donâ€™t want to play it solo too much for fear that youâ€™ll spoil too many of the storylines for your multiplayer games, but at the same time, it may be best to keep it as a solitaire experience altogether for some people. The speed and fluidity of the solo game make it one of the best adventure games for one you can buy.

In the end, itâ€™s obvious that FFG took bits and pieces of their very best designs, be it Eldritch Horror, Runebound, or any one of their narrative-driven games like the Arkham Horror LCG, and mixed them together to make something very special in Fallout. While it stumbles a bit near the finish line, Iâ€™m excited to see where the system takes us in the coming months and years.