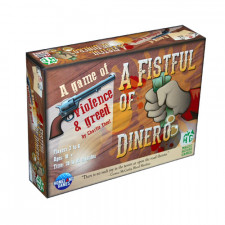 A Fistful of Dinero Review

Whichever brand of Western A Fistful of Dinero is trying to evoke, it certainly isn't the kind set against a moody backdrop of dusty red-rock towns and men with stares that go straight through you. If you've come to the game for a tale of revenge, of pursuit and justice, or just plain old cattle rustlin' you might be disappointed. A slick treatment of the post-war frontier, this ain't.

Instead, A Fistful of Dinero is the flavor of Western dominated by upbeat (and upright) saloon pianos, keys jangling cheerfully as the piano player nonchalantly ducks beneath a hurled bottle. Stools splinter, tables are overturned, someone is tossed through the sugar glass windows, and a plucked chicken squawks across the scene, feathers flying.

This is the first game by Charlie Theel â€” who, disclaimer, is one of my bosses here at the Review Corner, so my job is in peril if I don't give him a five-star review. Its subject matter is deliciously fresh, transporting your table of friends to a very similar but probably much dirtier and alcohol-stained table in the Old West, 1886. What began as a friendly game of cards has gone sour; from a blood-spotted sleeve slips a fifth ace, and thus from three to six holsters slip well-worn pistols.

The only other game I know of to tackle similar subject matter was 7-Card Slugfest by Level 99 Games. There, the concept of a barfight was brought to life by having its players madly bruise the backs of their hands in a real-time game that gave its abused cards an unfortunately short lease on life. By contrast, A Fistful of Dinero is somewhat more civilized.

Which isn't to say it makes much sense. The gameplay is a hodgepodge of ideas, some of them better integrated than others, resulting in something more often endearing than functional. Everyone gets a gun belt, handily double-sided for both right- and left-handed players. Each match opens with everyone picking two weapons, one for each holster, with whichever weapon they carry in their off-hand being harder to aim. "What if I'm ambidextrous?" you might be asking. Sucker, prove it, because every ambidextrous person I've met has written like a three-year-old no matter which hand held the crayon.

From there, everyone takes a wad of cards and performs the quickest draft I've ever played, taking a card and passing the rest of their hand to the next player. This continues until everyone has three cards lined up along their gun belt, primed like ammunition ready to be fired.

The rest is as simple as popping them off one, two, three, or at least it looks that way at first. The resolution of these cards makes up the meat of the game, delivering options that let you shoot your gun, spend one or more turns taking aim to improve your chances of landing a hit, making a mad dash out of cover to pick up some of the cash that was spilled when the fight erupted, or even shooting said cash full of holes to prevent exactly that sort of behavior. You can take cover, using overturned tables and even innocent bystanders to hide behind, all of which can be hurled as improvised weapons if you've drafted the proper cards â€” a hilarious move that has players physically throwing their cards at their opponents, which is every bit as desperate and ineffectual as it sounds. Resolving the gunfire itself is simple enough, handled by rolling a pair of dice and checking some modifiers (whether you've spent turns aiming, whether your target is behind cover, stuff like that). A high enough roll gives your target a wound card, possibly knocking them out from behind cover or inflicting a dreaded gut-shot that festers over time. These systems give the game life and fill it with a healthy dose of tension, though anyone with allergies to dice or chance should keep their distance.

Keeping count, A Fistful of Dinero features card drafting, programmed actions, dexterity, chance mitigation, and risk management â€” and all of them in fairly pared-down form. It would be easy to dismiss this as little more than just one more freshman Kickstarter title, especially when you see the awkward campaign backer art adorning the bounty cards. Every match I've played has also been beset by at least one apparent contradiction, usually thanks to the wackier weapon cards; an obvious downside unless you consider players arguing about their differing interpretations of a card's text a part of the experience.

And yet, somehow, the game excels once you realize that it's really about negotiation, a sort of six-way Mexican standoff where your social currency is a mix of dangerous weapons, how much cash you've pocketed and how big you can talk. A scattergun, with its chance to shoot everyone at once, can intimidate the whole table â€” or piss them off into ganging up on you. A lever-action Winchester's unlimited ammunition and long barrel is great at a distance, but does little to frighten adjacent opponents. And any discussion that opens after you've just pulled two fistfuls of dinero from the center of the table isn't going to begin with people singing your praises. Unless they're praising how good you'll look stuffed and mounted.

Pulling off this transformation from amateur hour to forty-five minutes of anxious negotiation absolutely requires the game to be played with five or six people, despite being advertised as playable with as few as three. With a full staff and the right mindset, it becomes a game of lucky shots and near misses, where you can toss a stick of dynamite at the cowboy who slighted you last turn and laugh as he drops it in his own lap while trying to throw it back, blowing his legs off and pelting his neighbors with shrapnel. Under the right circumstances, there's hardly anything quite like the experience A Fistful of Dinero provides.