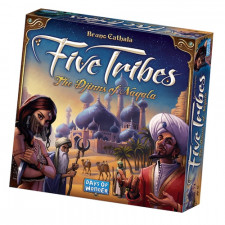 Five Tribes reminds me of the sort of games that got me into the hobby. Itâ€™s a mechanics-first euro design, with tons of ways to score points, no real interest in theme beyond the graphics and a brainy sense of fun that allows the player to go as deep as they want. Thereâ€™s something refreshing about it. It creates a space where the player can pick how they want to win, while still forcing them to respond to what the other players are doing. At the end of every session I feel the distinct satisfaction of a good game, one that feels complete even as it makes me wonder what the next game will be like.

Often one of the key ways to make a good strategy game is to take a classic game and import some of its mechanics to a new design. In the case of Five Tribes, the key mechanic is similar to Mancala. You pick up a pile of meeples on one square, and leave a trail of them as you move around the board. Where the last one lands will dictate what you do next. First of all, you remove all of the meeples that match the color of the last one you placed, giving you control of the tile if this empties the space. These meeples allow you to take different actions, all of which eventually lead to more money. Then you get another action based on the tile on which you landed. All of these actions push toward a few different goals. Taking control of a tile gives you endgame points. There are ways to buff those points using actions to increase the value of tiles with palm trees or palaces. Thereâ€™s also a sub-system of card collection, giving you money for grabbing different kinds of goods. And of course you want plenty of money, because thatâ€™s how you win.

Thereâ€™s an attractive setting involving merchants, palaces, and djinns, but thatâ€™s not really the point. The point is that this is a very sharp design. Nothing feels out of place or poorly-considered. Most impressive is that, even though the action on the board is basically perfect information, it plays out very differently every time. The placement of the tiles and the distribution of meeples at the beginning form a great starting point for the players to do what they want, and the cards make diversify the sessions even more. Perhaps the best move is one that designer Bruno Cathala has used in many of his other designs, like Cyclades and Abyss: special power cards. These take the form of djinns that the player can buy and keep in front of them as a permanent ability. Five Tribes is already a highly varied design, but the djinns ensure that nothing feels stale.

For a game that doesnâ€™t really have a lot of above-the-table interaction, Five Tribes feels surprisingly open. In several games Iâ€™ve seen different methods win every time. The game is short enough that you probably wonâ€™t do everything effectively, but it also seems tough to focus on just one thing and win. Crucially many things produce points without a lot of setup, so you can change lanes as the game goes on. Itâ€™s all about doing the best you can with how the board is right now. This ability for all of the players to make something work pays off as the game becomes more constrictive. As meeples leave the board, the number of good moves goes down. It then becomes an issue of reading the board and looking for the possibilities that will yield the most points. And if you spot something, you can pay through the nose to make sure youâ€™ll go first and wonâ€™t miss it. This has the potential to be highly analytical, and some players will definitely need to take their time to assess everything on the board. Pick your opponents accordingly.

Five Tribes is kind of a thinky game, especially from Days of Wonder, who usually focuses on lighter fare. But the really great part is that the game doesnâ€™t need to be played on the championship level to pay off. If youâ€™re like me and prefer to just do whatever and see if it works, itâ€™s still fun to find the big payoff before someone else, or find that crucial combination of djinns that pushes you over the top. Encouraging this low-key approach is the fact that itâ€™s hard to plan in the long term. The board state changes every turn, so there really isnâ€™t any point in planning everything out in advance. That might bother some people, but it actually creates a space in the game for people to socialize without really slowing everything down. Five Tribes showed me the modern tendency to reduce downtime was kind of pulling me away from my whole purpose in board gaming: to spend time with my friends.

There is more to talk about, like the agonizing auction system or the sumptuous production. But itâ€™s best to just tell you that Five Tribes is the finest release from Days of Wonder since Small World. With its first expansion coming later this summer it looks like it will have legs well into the future. But thereâ€™s no need to think about what Five Tribes could be. Itâ€™s already pretty great.