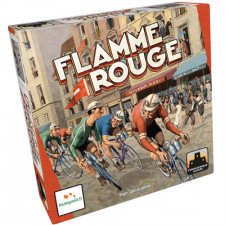 The only thing I know about bicycle racing is that putting a playing card in your spokes means you can ride a lot faster and look a lot cooler. However, I was drawn to Flamme Rouge because of its designer Asger Harding Granerud, who co-designed 13 Days. I figured if he could distill a game like Twilight Struggle into a 45-minute game, then he might be able to do something equally compelling with cycling.

All the thrill of cycling, with none of the juicing required.

In Flamme Rouge, you have control over two cyclists: a sprinter and a rouleur. Each cyclist has its own deck of cards, representative of the kind of racer it is. The sprinter deck ranges from slower speeds to big bursts, whereas the rouleurâ€™s deck has more consistent speeds with less of an overall range. Simultaneously, players select which cards in their hand to play for each cyclist, then resolve the turn by moving cyclists forward, front to back. Then comes slipstreaming: a key part of the game. Cyclists clustered in a pack get to move forward again, almost literally riding on othersâ€™ coattails â€“ or, well, spandex shorts in this case. Lastly, cyclists who have too large of a gap in front of them receive exhaustion cards that go to the bottom of that riderâ€™s deck. Eventually, these will get shuffled in and youâ€™ll end up having to play them for their paltry two movement points. This is a really great example of how well integrated the theme is in the design. If your cyclist sprints ahead of the pack, heâ€™s going to get tired. I quickly learned that cycling, and Flamme Rouge, is not about shooting into the lead, but rather maintaining a good position in the pack. You only need one rider to cross the line to win, so having your sprinter and rouleur help each other out is vital to winning the race and gives the game a true team sport feeling. 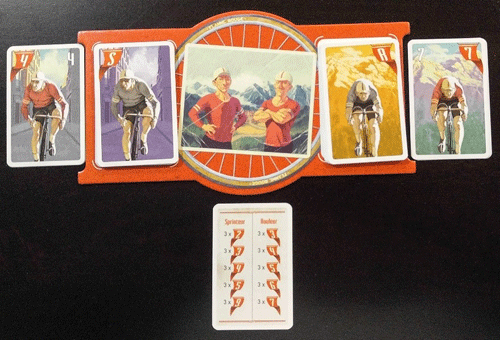 The Thelma and Louise of cycling, only with less cliff diving.

All in all, seems pretty basic, right? It is. And herein lays the gameâ€™s biggest strength and weakness. The simplicity of the game is incredibly charming. Itâ€™s easy to jump right into and there is a fun physicality to the game that comes from building the track and moving your wonderfully sculpted cyclists along the board. The game mimics the feeling of racing without any extra stuff getting in the way. Immediately, you get some adrenaline-pumping, tense moments as your rider pushes past another, claiming the lead. The decision of which card to select is simple while still being interesting. The game maintains a great pace, clocking in around 45 minutes. And, regardless of the track you choose to use, there are not any additional rules or fiddly side conditions to throw in. Even the â€œadvancedâ€ variant only adds two minor rules about your maximum or minimum speed when going up or down mountains.

In a way, because of the gameâ€™s simplicity, it kind of functions like a slightly more complex roll-and-move game. No, you are not actually rolling any dice, but your choice in moving each cyclist is limited to selecting a card from a hand of four. Outside of this, youâ€™re not really doing anything else in the game. Itâ€™s difficult to know if you pulled ahead because of some clever card play, positioning you right in the midst of a perfect slipstream, or if you just happened to have things work out in your favor. Without a doubt, the racing part is really fun, but I wanted more out of the deck/card play. Admittedly, that compromises the elegance of the whole design and negates the simplicity that I just praised above. Iâ€™m really of two minds about Flamme Rouge. I continue to be drawn to it while also feeling slightly unfulfilled afterward. 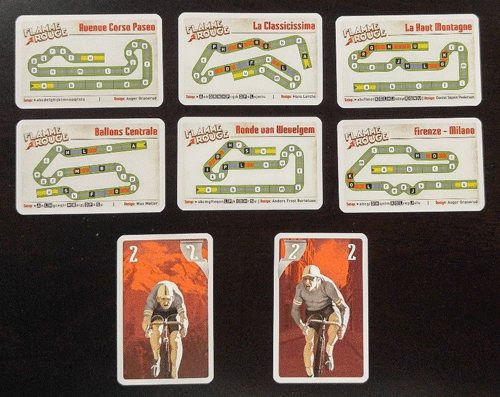 Those tracks are exhausting just looking at them; no wonder those guys are tired.

Despite my criticisms, I recognize that racing games are hard to get right. I know there are a ton of games that play more like simulations, but to distill the complexity of racing down into a simpler, more approachable under-an-hour session seems to be a difficult task. Perhaps thatâ€™s why there are so few of them made, relative to other mechanisms like worker placement, action selection, etc. Arguably, if I liked (and understood) bicycle racing more, perhaps I would have a better appreciation of and derive more enjoyment from the game. However, a great design can pull you in regardless of how appealing the theme is initially. As such, Flamme Rouge offers a generally pleasant experience that is easy to play with any crowd. Itâ€™s a disservice to the design to call it a â€œbeer and pretzelsâ€ style game, but I do think that going in with that level of expectation may help. Itâ€™s a light game with minimal depth. However, anyone that is a cycling (or racing) fan will certainly have an enjoyable racing experience.