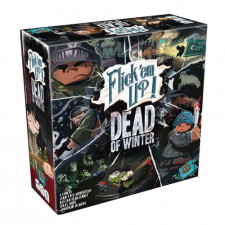 A rotten stench fills the air as a horrifying moaning fills your ears. Under the light of a flickering street lamp you see a shadowy silhouette emerge. Your heart races. Itâ€™s a zombie; theyâ€™re here. In a panic you draw your pistol, take aim, and watch as your bullet bounces off two allies, a truck, and the lamp before slamming into the zombie who stands right back up. This is Flick â€˜em Up! Dead of Winter, an undead follow up to the dexterity smash hit Flick â€˜em Up. 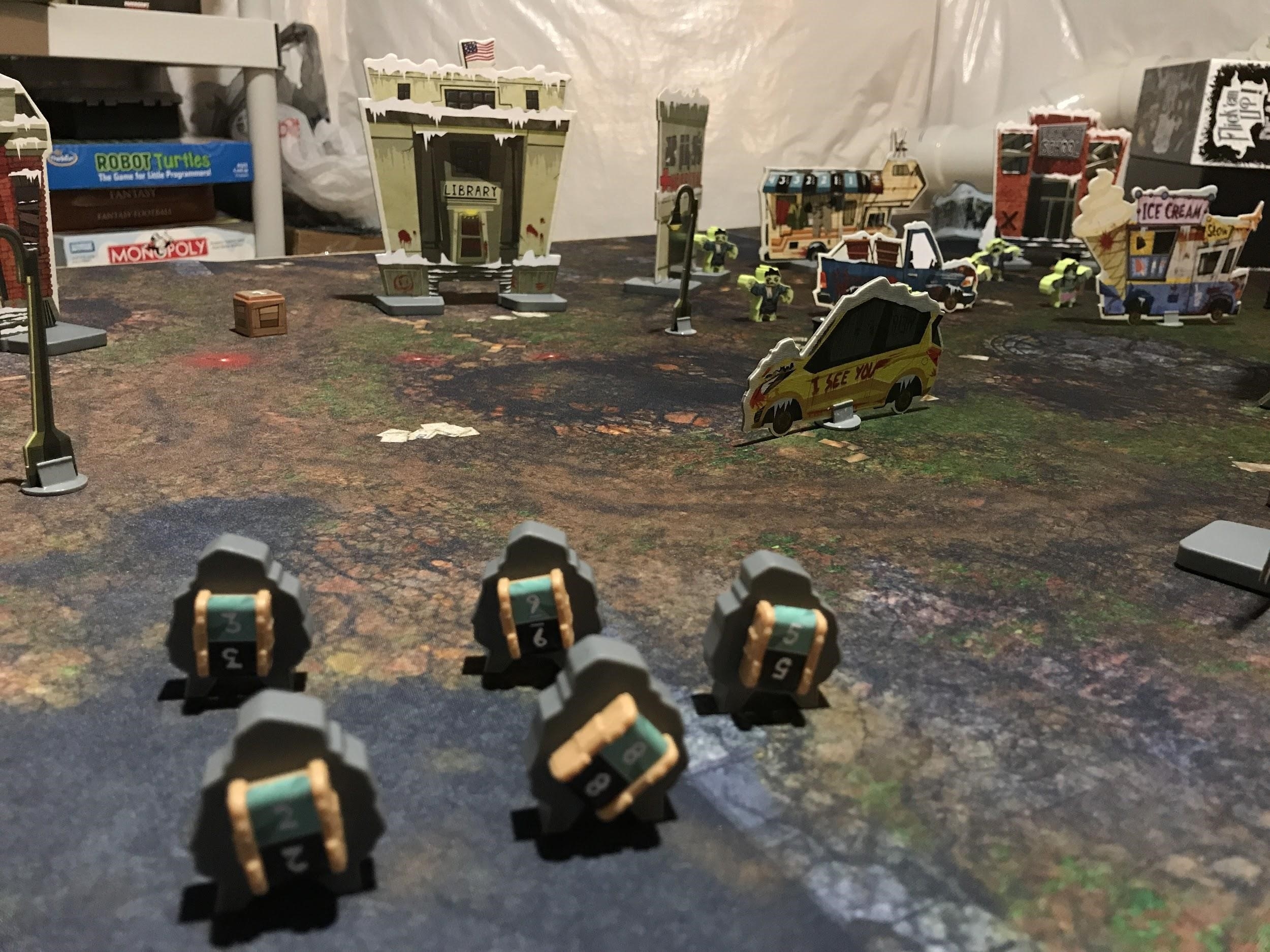 The only thing between us and the supplies we need is a handful of hungry zombies that want our brains.

This game is a sight to behold. Packed into this over-stuffed box are handfuls of thick weighty zombies, 11 survivors, weapons, markers, and enough 3D terrain to fill a miniature wargaming table (Iâ€™ve done it). These bits tumble onto - and often across - the table in a celebration of undead horror and joyful play. Very little in this game can be reduced to a marker or token. Almost everything has a kinetic purpose though everything works just a little bit differently.

Flick â€˜em Up! Dead of Winter is a game of scenario based zombie survival. 10 unique scenarios gradually introduce systems and rules, though none of them feel incomplete. Unlike some games that drip-feed rules across scenarios, the early ones are no less fun to return to and you can even bring some of the later rules with you. In an homage to the original Dead of Winter source, teammates will eventually have secret objectives that will lead you to wonder whether their errant flicks are the typical flubs that come with dexterity games or a more sinister stall tactic.

Those scenarios are fine, but they arenâ€™t what make this such a great game. Theyâ€™re an excellent skeleton that makes the dexterity elements more than mindless flicking. What makes this game so damn good is the way they focus your physical actions on a story. It gives your failures more weight than just missing a target, and gives your success a greater context. Yes, at the end of the day youâ€™re sending pieces of plastic careening across the table but while youâ€™re playing the stakes are higher. Peopleâ€™s lives depend on you collecting food. The need to get back to the RV would be enough to make stopping to search for a shotgun a hard choice on its own but when youâ€™ve got to shoot a disc across the table? Itâ€™s awesome. 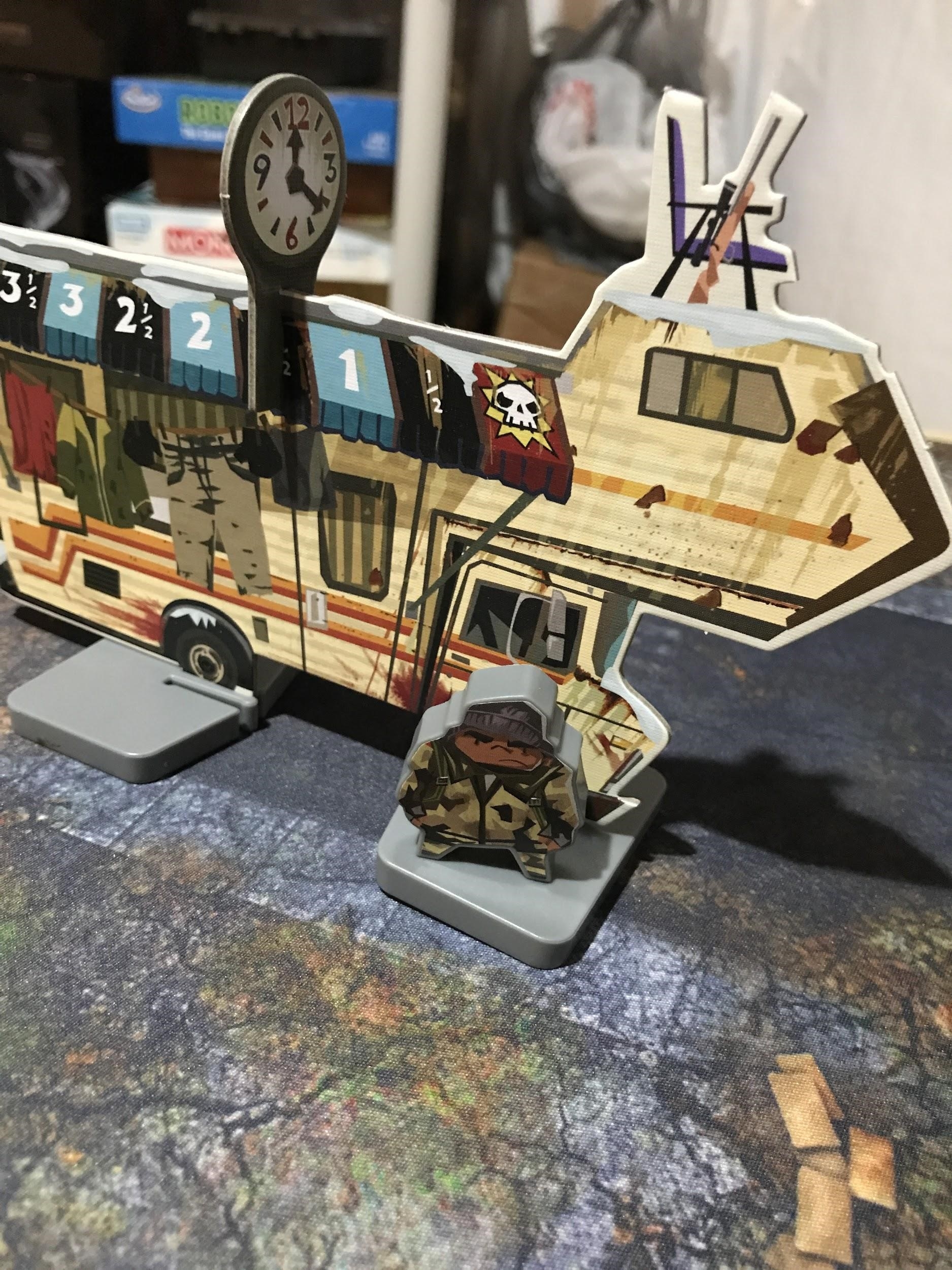 Think you can send a disc through the gap under the RV? How about from 24â€ away?

Itâ€™s not an overly complicated game, but there are pressing concerns. The round tracker ensures you canâ€™t dally and zombies are tumbling towards you every round. That puts just a touch of pressure on your flicks; just enough to give you a little tremble or make you hold your breath. Itâ€™s not on the same level of tension as actually fighting a zombie (I assume) but itâ€™s certainly more than you get shuffling some tokens around.

On top of that, everything flies differently. Normal pistol shots and human movements work by flicking a disc across the table, but grab a rifle and now you get a cardboard guide to works to set up accurate shots that make you feel like an Olympic champ. Shotguns sent tiny little pieces flying across the board, while the baseball bat allows you to move and fight at once. It feels pretty great to send a bat spinning across the map, smashing zombie skulls along the way. 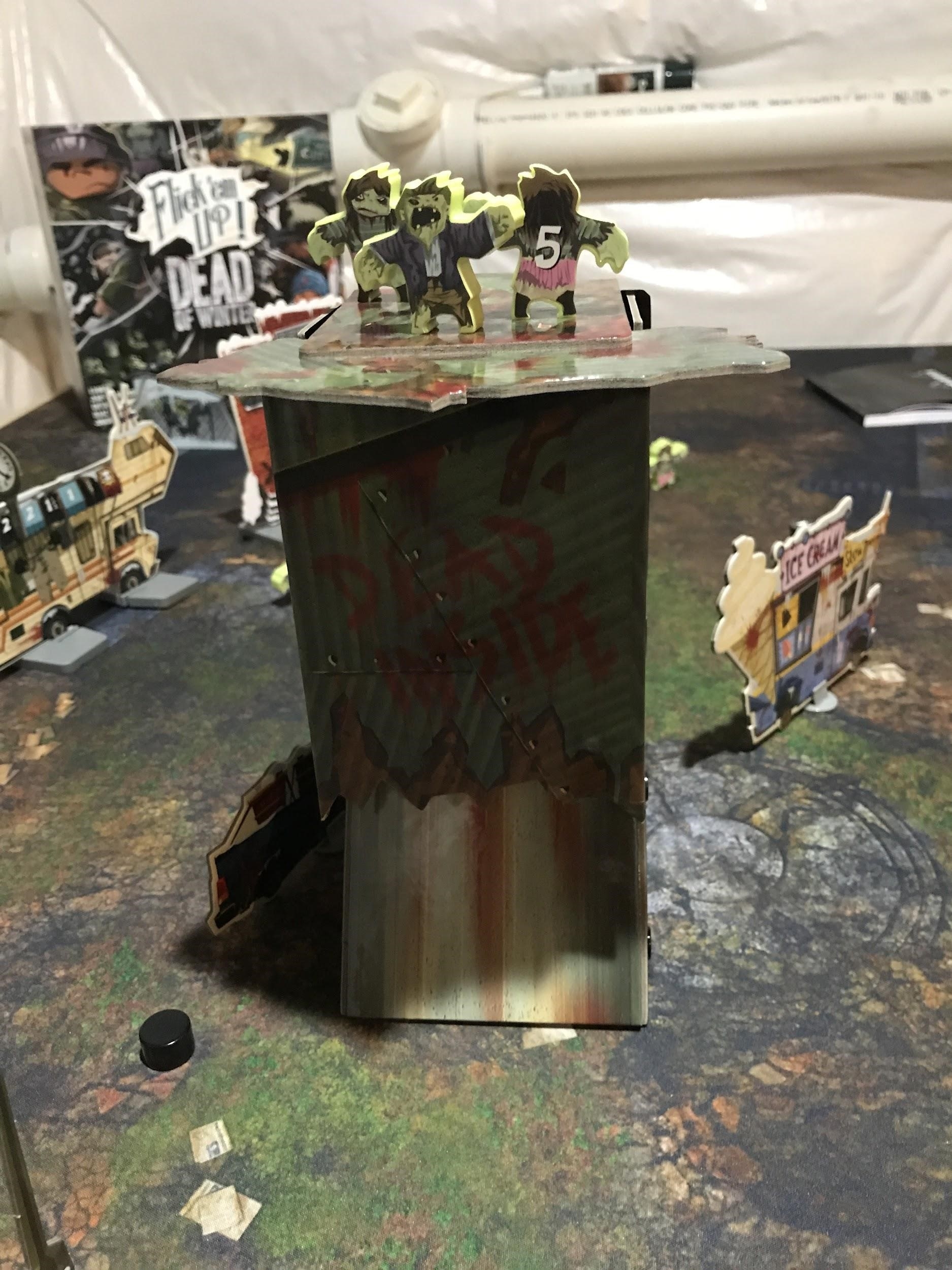 The most impressive set piece of this whole production however, is the zombie tower. Zombies arenâ€™t exactly known for their agility and this wonderful addition emulates that in a physical way. Any time zombies are supposed to move or arrive to the city - which is often - they are placed standing atop the tower. Their ledge swings inward, dropping the zombies through the tower and sending them tumbling forward onto the map. Their general direction is known but the exact path they take is as wonky as zombies are disgusting. Iâ€™ve seen a survivor somehow avoid getting hit by 3 zombies only to see her taken own two turns later by one that pirouettes around a barrier. This tower is both awesome and hilarious. It gives the zombies a â€œrealisticâ€ feel while contributing to the kinetic joy this game provides.

Dexterity games are certainly not for everyone, but this game is for everyone who likes dexterity games. The scenario set ups and secret goals ensure that this is far more than a toy or finger-based target practice, but it still revels in the fun of toy-based play. I wish more games made use of physical space the way the Flick â€˜em Up series does. Now if youâ€™ll excuse me, I need to go practice launching a knife at the table without killing poor Kyle. .