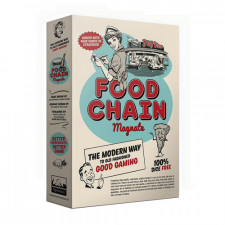 Games released by the Dutch publisher Splotter Spellen are an event. They donâ€™t put out much, but their designs are of a uniformly high quality, a heavier-than-usual weight for Eurogames, and they all go out of print quickly and their aftermarket values skyrocket. Their newest issue is Food Chain Magnate and it is definitely in line with their past games such as Roads and Boats, Antiquity and Greed Incorporated. For the uninitiated, this means you can expect a game with a sometimes ruthless sink-or-swim development curve, lots of attention paid to logistical concerns, and a level of resource management quite a bit more intense than you might expect.

Iâ€™m also very pleased that the level of sly, subtle satire that made Greed Incorporated one of their very best releases to date has continued into Food Chain Magnate. From the lovely midcentury kitsch of the box illustrations and the takeout menu player aids to the concept itself, this is a game about fast food-style consumerism and the corporate engines that drive it. Itâ€™s a game where you use marketing campaigns to make people want to buy junk food and if theyâ€™re rich (i.e. they have a garden), they want more of it. Youâ€™ll develop an org chartâ€™s worth of employees and try to find a balance between having skilled, capable workers and letting them go when they fall below the bottom line. Of course, youâ€™ll need to hire middle managers along the way as you (hopefully) earn more money and expand your chain of eateries across the tile-based map.

There is a lot to love about this game, particularly for fans of heavier Eurogame designs â€“ be warned that this game is closer in complexity, duration and depth to Die Macher than it is to Splendor. Itâ€™s a design based on pure economics and working out how to make a profit and the margin for error, especially with advanced players, is very slim. You can expect to lose your first game unless you somehow happen to squeak by a table of tyros who are also struggling to sort out how to get ahead.

At its core, Food Chain Magnate is sort of a deckbuilder. Your fast food empire starts with a single location and a CEO card that allows you to train another employee (including waitresses, errand boys to fetch drinks, marketing managers, kitchen staff that make burgers and pizzas, trainers and other folks) and to put two employees to work. Once everyone locks in who is at work and who is â€œon the beachâ€, the cards are flipped and everyone takes the actions on those revealed. Many cards can be upgraded to perform expanded actions (but trained workers demand salaries), and in order to play more cards per turn youâ€™ve got to hire those middle managers to open new slots.

The object of all of this is to put demand markers on houses with marketing and then convince them (through price or location, location, location) to come to your stores and spend money- provided you can meet their demands for burgers or pizza and choice of beverage. There are several initially confusing rules about how this all happens in relation to the map, which is grid-based and comprised of random tiles that create a different arrangements of streets and houses each game.

Itâ€™s all very slowly paced and focused on long-term resolutions threaded through multiple turns, which some may find off-putting. I think Splotter realized that a four hour long economic game without some kind of milestone achievements in it might not work for most audiences, so they added exactly that. Milestone Achievements are short-term goals, usually involving being the first to accomplish or do something, also impart special advantages that remain with your company for the rest of the game. I like that there are concrete markers to reach for and I think that they are important in a game where everything leading up to the final cash-in-hand count is somewhat opaque. But on the other, it takes an already complicated economic game and burdens it with special powers and maybe a few too many decision avenues. 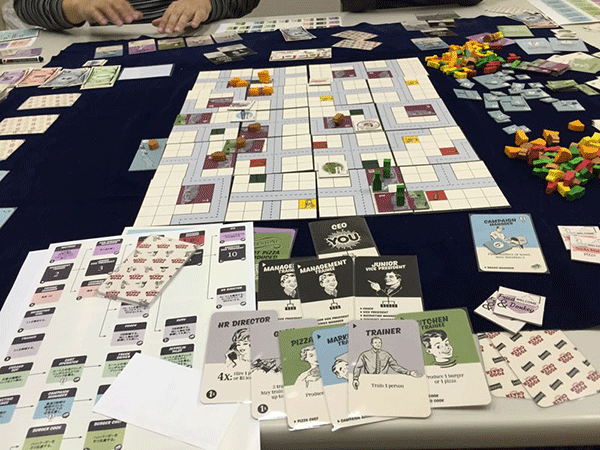 There is an option to play without them, and in face to face play I think that may be the best way for players to learn the ins and outs of hiring and firing, marketing and selling. However, I found that learning the game was by far easier by playing an excellent online implementation. Not only did it explicitly tell me where I could and could not place marketing campaigns, but it also put me in touch with other players who were willing to offer tips and give insight on strategies. I struggled not only with getting this to the table due to its length and complexity, but also in explaining the game to my friends. Playing online, everything eventually made more sense and I feel more confident about it even though I still have yet to win a game. Or even finish respectably.

Anyone interested in this game should definitely have a look at the online game first before plunking down the big bucks for a physical copy. It is definitely a game that will reward players that want to dig into it and explore its nuances, but there is also to my mind the lingering question as to whether or not Food Chain Magnate is â€œfunâ€. I donâ€™t think it is. In the final tabulation, it is a management game and it feels very much like management. This is one of those subjectively â€œgoodâ€ games that are really more interesting than fun. Your mileage may vary, of course, but it certainly does not mean it deserves a negative critical notice. I just admire it more than I enjoy it.