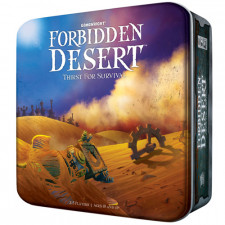 If you enjoy cooperative games then youâ€™ve likely heard of Matt Leacock. His trio of hits share many elements now practically synonymous with the category. First was Pandemic (2007) and he followed that up with Forbidden Island (2010). Both of these titles remain popularity with new, casual and family gamers. What does Forbidden Desert (2013) offer apart from its two older siblings? In a word: challenge. Pandemic can sometimes be tough. Forbidden Island is usually too easy. So where to turn to really make things difficult? You could always try nailing jelly to a wall. Or you can attempt winning Forbidden Desert. Your success rate will likely be the same.

Thereâ€™s certainly no drought of cooperative games of all challenge levels. The non-competitive element proves popular for many reasons. Accessibility, social gaming and change of strategic pace are among the benefits. However, many focus on either too much simplicity and access, or theme and experience. The former are generic, unchallenging and hold little appeal for seasoned gamers. The latter often prove unwieldy, unapproachable and beyond anyone casually interested in gaming.

Forbidden Desert bridges the gap between ease of access and demanding narrative. Itâ€™s drenched in tension, angst and pulpy exploits that ratchet up the threats and intensity. Yet itâ€™s also streamlined and intuitive, making it ideal for a wide range of experience levels. Part Indiana Jones and part Flight of the Phoenix, it exudes adventure and especially caters to those who enjoy the genre, but have turned an indifferent eye amid the glutted market.

Players take on the roles of explorers or archeologists that crash land amidst the ruins of an advanced, ancient civilization. With the sun bearing down and sand all around for miles, you must quickly unearth four parts of a derelict airship to exact your escape. Or will the storm and scorching heat bury you with the Pharaohs?

To thwart this seemingly inevitable fate, each player has a particular role with a special ability and may perform up to four actions each turn. Twenty-four land tiles arranged in a 5x5 grid represent the barren wilderness. The empty space is the eye of the storm. You and your team will run about excavating tiles to reveal useful gadgets, wells and airship parts in order to survive and escape before the elements overwhelm you. After everyone does their thing, the storm wreaks its havoc and threatens to doom the entire expedition.

The concept is not dissimilar to that underlying most cooperative games. Where Forbidden Desert excels is allowing players to engage the theme and enjoy the torment it inflicts upon without hanging up on fiddly mechanics and rules chrome. Itâ€™s story-building, but not work. Itâ€™s simple to play, but not easy to win.

Perhaps the element best illustrating this synergy is the manner by which you discover the machine. Each part of the ship has two corresponding tiles, one with horizontal arrows and the other vertical. When both are revealed they point to the coordinates where that piece can be found. Just follow the axes until they meet and place its component there. â€˜Xâ€™ marks the spot! Constructing this contraption is your goal. Despite its central nature, it is resolved simply while performing the gameâ€™s normal actions.

That is, unless you die before finding them all. Despite the sense of looming doom, itâ€™s completely compelling and captivating. While youâ€™re excavating sites, clearing sand dunes and searching for succor from the scorching sun, the storm rages and howls. Just as youâ€™re about to uncover the final clue to the propellerâ€™s location, the gale reverses course and blows sand all over the exact spot you need to reach. Everyone apprehensively awaits the flip of every tile.

The sandstorm mechanic is genius. It presents major obstacles and serves as a game clock. Each round, the eye of the storm swirls around according to a number of directional cards you draw equal to the stormâ€™s intensity. It deposits sand tokens on tiles that shift in the move. Locations with two or more of these are impassable and must be completely cleared to excavate. On top of that, some of the directional cards increase the stormâ€™s intensity or force everyone to drink water. If the weatherâ€™s ferocity reaches a certain height, everyone dies. Likewise, if anyone runs out of water the entire party perishes. And if you deplete the sand tokens, the squall overwhelms you. Manipulating the tiles and tokens is certainly fiddly but it creates amazing tension as you nervously watch the unpredictable tempest blow your plans away like dust in the wind.

Of course, the best mark of a good cooperative game is how well it forces you to work as a team. Forbidden Desert shines in this regard. This isnâ€™t about trading measly items or each doing their own little job. Instead youâ€™ll employ your roleâ€™s individual talent to benefit the team. The water carrier can refill her canteen and share with others. The climber can carry a buddy with him. The meteorologist can sacrifice actions to draw fewer storm cards and provide some respite. Besides that, everyone will need to pitch in â€“ and I mean everyone â€“ to keep sand clear and find those airship clues. Groupthink is crucial. Thereâ€™s still a risk that an alpha player might try to monopolize decision-making, but just bury that guy neck-deep in the sand next time youâ€™re at the beach.

Forbidden Desert includes outstanding components and is a solid value given its low retail price. You might see wear and tear along the edges of the storm track and the role cards where plastic sliders mark intensity and individual water levels. However, everything else is sturdy. The artwork is fantastic and adds to the gameâ€™s exotic pulpiness. Best of all, the flying machine is comprised of five sculpted components which you can actually assemble. Itâ€™s completely gratuitous, but we love Gamewright for it.

Elegant and nerve-wracking, Forbidden Desert is an oasis in a crowded genre. If youâ€™ve turned an indifferent eye to the co-op clones, you might want to give this one a try before writing them all off. Itâ€™s no mirage, but a puzzling and challenging adventure with broad appeal that stresses the â€œco-opâ€ in cooperative.