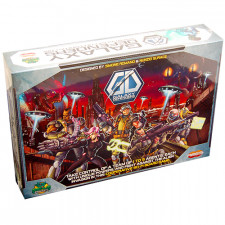 Galaxy Defenders was conceived by two dudes from Italy who call themselves Gremlin Project, and that's what this game is: a project. If you're the type of gamer who enjoys fiddling around with variants, house rules, and modular rulesets, you'll find GD's toybox brimming with possibilities. However, Ã  la carte gamers who prefer their games strict, streamlined and self-contained might find their fun replaced by frustration in an Invasion of the Body Snatchers-style scenario that would feel right at home in this game's kooky narrative.

Galaxy Defenders is a sci-fi cooperative tactical combat miniatures board game, and every word in that description counts. Specifically, GD is neither strictly a miniatures gameâ€”a genre where its DIY attitude feels more at homeâ€”nor strictly a board game. Rather, it attempts to bridge the gap and make itself accessible to fans of both genres.

The core set comes with 28 detailed plastic minis at 40mm scale. That's 5 playable characters, a couple of unique drones, and typically four figures of each unique enemy sculpt. Numerically, it's tiny compared to the likes of Zombicide and Myth, but GD's board game ethos ensures that each component is supported by unique, balanced gameplay. GD is for players, not collectors.

The 12-scenario campaign (of which you'll only play about eight in any given playthrough) does a great job at placing you in GD's madcap setting, which cribs shamelessly from the sci-fi camp classics of the past four decades. Aliens are launcing an Independence Day-style invasion of Earth, but luckily, humanity had warningâ€”a rogue alien scientist named Hackbar (itâ€™s a trap) made contact with a couple of FBI agents (who just happen to look like the game's designers) and told them of the coming threat. Thus XCOM, er, the Galaxy Defenders were formed as a special strike force outfitted with the latest Area 51 technology and tasked with guarding Earth from extraterrestrial invasion. The campaign takes the players from first contact to final showdownâ€”Judgment Day, if you will.

The story text is pure cheese, brief, and sometimes awkward in English translation, but it effectively builds to an exciting climax. The missions themselves are hit-and-miss: the worst of them try too hard to play out like a Hollywood movie to the gameplay's detriment. For instance, one mission has the players sniffing out a spy at the GD Agency. Its minimal combat means the scenario takes more time to set up than to play, the final outcome is largely luck-dependent, and the players' actions in early rounds are mostly meaningless. Another mission tasks the heroes with protecting civilian scientists from alien invaders. It's a great idea, but the execution feels half-baked, with nearly 2/3 of the game map virtually unused.

Luckily, there are more good missions than stinkers. Quick, straightforward, and objective-driven, the intro mission is highly replayable, while the mid- and end-campaign climax missions are sprawling, epic survival trials that use pretty much every figure in the box. Other mission highlights include scavenging enemy corpses for self-destructing techâ€”I can't help but draw the analogy to loot dropsâ€”and a kidnap-the-leader scenario that asks the agents to incapacitate and extract one of the game's toughest enemies.

When you get bored with the provided missions, you can download the feature-rich Mission Editor (a Windows app) and try to design your own. Sadly, this feature has been largely ignored by the player community, perhaps because of the length and difficulty of the official campaign. There is also a weirdly fleshed-out "Galaxy Ball" variant that turns GD into a head-to-head rugby-style sports simulation, with cards for each of the human and alien figures depicting them in futuristic sports gear. This shows Gremlin Project's vision for this game: a standalone cooperative campaign game, yes, but also a toolbox for fan mods, remixes, and endless customization. Some of the core set's missions are stinkers, but you've got the tools to improve them.

The gameplay system mostly reinforces this concept. Each mission plays out across multiple large, rectangular map boards broken down into hex-shaped spaces and thick-bordered clusters of hexes, called areas. This simplifies gameplay significantlyâ€”hero movement and line of sight are measured in hexes, but weapon range and enemy movement are measured in areas. With only 12 maps (distributed over six two-sided boards), the game provides numerous tiles of various shapes and size that add walls and rooms to maps to suit the mission.

Typically, each mission places three to four Teleport Points on the map. Aliens might randomly appear at these spawn points at the end of each round, each TP symbol corresponding with a face on one of the game's two varieties of custom 10-sided dice. When they first teleport in, though, the aliens are just radar signalsâ€”until they're in line of sight, they could be any species, even humans or false blips. By changing the distribution of alien and human signals, you can tweak the difficulty of the scenario to your liking.

The agents take discrete turns broken down into 3 simple activities: one movement, one action, and one attack. Movement speed is printed on the character's agent sheet, which also shows their two available weapons's stats: attack range, the number/type of dice rolled, and any special abilities. Actions are more situation-specific, but they could involve mission-specific activities like setting bombs or searching; basic actions like unjamming a gun, using an item or bashing in a door; or the various skills and tactics the agents learn as they "rank up" over the course of the campaign. The five agent classes each play a unique role on the team, like tank, healer and crowd-control specialist.

After each agent turn, the alien turn begins by drawing a Close Encounters card from the mission-specified deck, this being another area of potential customization. Close Encounters cards tell which enemies act, using metrics like species, rank, amount of wounds, or distance from the action. The enemy's actual behavior is determined by its AI card, which uses the proximity of the nearest visible agent as the key metric. Each species and rank of alien has its own AI card, and these differences are significant: some enemies help their allies move around the battlefield, some drag you into the fray, and others act like mobile spawn points. In fact, learning to exploit the enemy AI is a critical aspect of gameplay. For instance, the grunt-like Xeno Betas like to attack from range 2, so consistently crowding them in close combat is an effective strategy. Changing the types and ranks of aliens in the mission is yet another customization option.

The same AI that gives the game a lot of its plug-and-play appealâ€”just spawn a new enemy type into a level and watch it do its thingâ€”also provides the game's biggest shortcomings. As robust as it is, the AI leaves a lot of grey areas that are ultimately up to the players to resolve, and your group needs to feel comfortable making those judgment calls on behalf of the enemy. The AI also has an unfortunate tendency to gang up on a single agentâ€”the default tiebreaker when choosing between two equidistant targets is to attack the one with the most woundsâ€”meaning that player elimination is common. Dying in a mission is simply no fun for that player, forcing them to lose their campaign upgrades and sit out the rest of the session.

Just as it is a project, GD is an investment. The core set is good, but to unlock its true potential, you should be prepared to buy into the expansionsâ€”both the large-box campaign expansions and the more modular expansions like the Elite Alien Army, a hard-mode-enabled set of aliens matching the species in the core set. In GD, just like in the sci-fi films that inspired it, bigger=better.