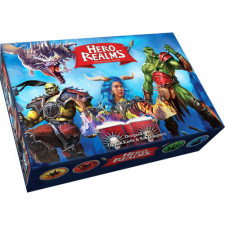 Board game reviewer Mark Bigney once remarked that rethemes are a paradox: they communicate to the consumer that a gameâ€™s setting is so important that slapping new art on a game will breathe new life into it, while simultaneously indicating that its setting is so insignificant that it can be stripped out and replaced with something else with little effort.

Such is the apparent contradiction in Hero Realms. Itâ€™s supposed to revitalize the Star Realms system with a fresh coat of paint, but it inadvertently betrays the fact that the originalâ€™s sci-fi setting is something of a sham, as its spaceships and battlestations can be replaced with knights and mages at the publisherâ€™s whim.

Now, the gameâ€™s not a straight retheme, as designers Darwin Kastle and Robert Dougherty reworked and rebalanced most of the card concepts from the original and players begin with a slightly different personal deck. The factions play a little differently than in Star Realms, and power curves have been tweaked across the board. Die-hard enthusiasts will certainly enjoy messing around with some of the new toys and trying new strategies with this new version of the game.

But the basics are unmistakably the same, with Star Realmsâ€™ four factions painted over with a fantasy setting and certain action types renamed to fit the new world. Unlike Cthulhu Realms, which took the basic concepts of Star Realms and turned it into something else entirely, Hero Realms is the original game dropped off in a new fantasy world with nothing but a knapsack to its name. 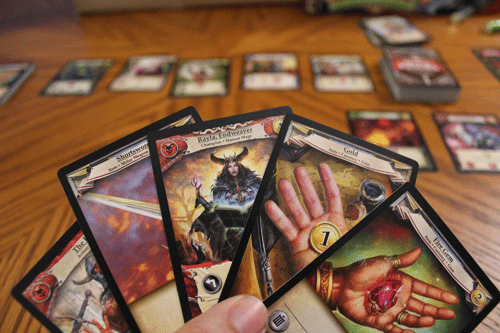 Itâ€™s a fairly generic settingâ€”swords, magic, creatures, you know the drillâ€”but the evocative art does a great job at making you feel right at home here. Itâ€™s a poor manâ€™s Magic the Gathering type of thing, like any of the dozens of MTG knock-offs during the â€˜90s, and thatâ€™s okay with me.

The gameplay is all but identical to its predecessor, which is to say, enjoyable but nothing spectacular. Youâ€™re very much at the mercy of the draw from your own deck and the flop in the purchasing row, with little you can do but make the best of whateverâ€™s in front of you on your turn. The gameâ€™s pacing ramps up turn after turn after turn, until one player lucks into a big turn and knocks you out one round before his opponent could have easily returned the favor.

It is fun, to be sure. Players will enjoy snagging a big card and anticipating drawing it from the deck a few turns later, or laying down 30 points of damage in their final turn. Itâ€™s got the typical joys of a deck building game in an attractive package, even if the design is a far cry from the genius of something like Dominion. 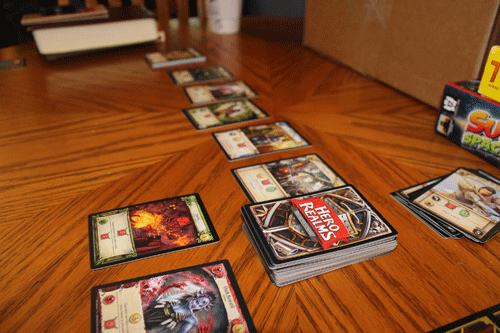 So this is a solid, forgettable deck builder that has its speed and weight going for it. Only the DC Comics Deck-Building Game does a light, fast deck builder this well, and itâ€™s neither light nor fast enough to compete with Hero Realms in terms of pacing and dynamics.

Ultimately, Hero Realms is a solid if unoriginal diversion that represents a major missed opportunity to really iron out some of the bugs of its parent game. Shaking things up could have taken the series in a new and exciting direction, but as it is, weâ€™re stuck with a rebalanced version of Star Realms with little else to distinguish it from the crowd.