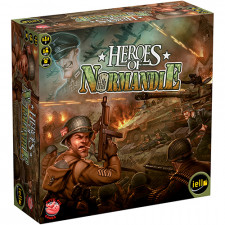 Let me preface this by saying that I am completely over World War II. I’m just not really interested in it as a gaming subject and I’m a firm believer that in terms of pure “consim” aesthetics and values, Advanced Squad Leader remains the ne plus ultra of the setting, at least at a tactical level. I’m not particularly interested in fealty to facts, which divisions were where at what time and using which equipment, whatever. And if I want to play some kind of battle game with terrain, various units and so forth I’ll still go for Duel of Ages, Heroscape or Ogre instead of Conflict of the Band of Hero Commanders North Africa Campaign ’44.

But then there’s Heroes of Normandie, a World War II tactical game designed by Frenchmen Yann and Clem working as Devil Pig Games. Although there is a veneer of historicity, Yann and Clem didn’t hit the history books to write this game. They went to the movies.

Heroes of Normandie is closer in tone to Kelly’s Heroes or even Inglourious Basterds (or its inspiration, the properly spelled Enzo G. Castellari film Inglorious Bastards), it references Saving Private Ryan and any number of other WWII films and shows. Its materiel artwork is highly detailed, but the figures are caricature. There are no Germans in this game, just the Nazis, and they are rendered in an awesome comics style.

Likewise, the action in this game is the stuff of Hollywood. Hero characters ride up in jeeps, under a hail of MG.42 fire, jumping out and throwing a grenade in a farmhouse before busting in through the window and wiping out a preening Nazi officer. The scenarios included in the base game are written as much like adventure game setups as wargame ones. One of the first tasks the US player with going out to retrieve a dog that gets spooked and runs when he hears gunfire. Another requires the American heroes to blow up a German HQ- the problem is, one squad wound up with the detonator and another with the TNT. So they’ve got to rendezvous to get the job done, all while an infamous sniper takes potshots at them.

It’s all very cinematic as Yann and Clem intended, and like my comment about the scenarios suggest, it plays out like a hybrid of adventure game and wargame with some qualities close to what you might expect from a miniatures game. To some degree, it reminds quite a lot of Christophe Boelinger’s epically overwrought Earth Reborn in its approach to detail and narrative. Mechanically, it employs an activation system similar to Heroscape wherein players place a number of secret activation tokens on their units, the order remaining hidden until their turn. Movement is a matter of spending points with penalties for terrain. Move into an occupied square (not hex) and you engage in Assault combat which is resolved with a simple highest-wins D6 roll from both players. Shooting requires the unit to forgo movement and is equally simple- roll a D6, add the appropriate bonus versus the unit type being attacked, and if it hits the target is either flipped or eliminated.

The core of it is easy. But this is a fairly complicated game once you figure in terrain effects, equipment, character traits, unit abilities and a big deck of action cards for both sides that allow for all kinds of crazy, exciting and dramatic turns of event. The level of detail is actually kind of daunting but not unusual for a WWII tactical game. It more than holds it own among the heavyweights of the genre in terms of dotting the I’s and crossing the T’s.

Scenarios give you proscribed setups in terms of which units to field, but those so inclined can roll their own scenario or swap out point values with other units. I really like the army building system. Each unit has a long punchboard with slots in it to put detachments, equipment, vehicles and traits. So if you want to take out the US Rangers with a .30 cal and a Willys jeep, pay the points and it’s all on your card. There is a TON of flexibility in what you can do with this game and copious expansion material (including fan-made content) ensure that this is a game that has legs- if you buy into its particular, peculiar view of how to game WW2.

I totally buy into it, and in a way this is the WW2 game I have always wanted to play. It’s not stodgy and over-serious, it wants to give you the toys but not the history class lectures and I appreciate that. I love that it is all about iron-jawed US grunts going toe-to-toe with monocle-wearing, preening Nazis. Some may chafe at its irreverence, but I embrace it.

There are a couple of issues with the marketing and production, however. The rulebook is something of a mess and some elements are needlessly opaque, hidden behind clutter. The production quality is outstanding across the board, but it is a major hassle to organize and store once you’ve moved on to the expansions. And I am not particularly fond of how the game mixes up boxed expansions, single punchboard add-ons, Kickstarter exclusives and other scattered elements. I like to have things in one place, neat and tidy, without chasing after multiple products and product types.

Regardless, I love Heroes of Normandie to the point where I’ve become somewhat obsessed with it. I think it’s a brilliantly simple system, but they’ve overlain it with tons of detail and dimension. It’s a populist, comic book take on WW2 that does things that are both quite traditional for the genre while also offering some innovative concepts more in tune with adventure games. I can’t wait to play more of this system.