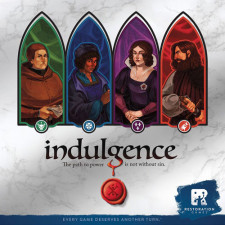 I have a love-hate affair with trick taking games, in that I typically hate them but have always had friends who love them. I spent hours in high school bumbling through back-of-the-classroom games of Spades, and a few more in college watching my friends rattle off exactly what I had in my hand using some form of card counting black wizardry. I initially planned to ignore Indulgence from Restoration Games but after falling head over heels for Downforce I decided to give it a shot. Iâ€™m very glad I did.

Restoration Games is a new publisher focusing on breathing new life into classic old games. That breath comes with updated art and tweaks to modernize and improve upon the classic rules. Indulgence is a fresh take on the old game Dragonmaster, now set amongst the warring families of the Italian Renaissance. While I havenâ€™t played the original â€“ it was published a few years before I was born â€“ Iâ€™m enjoying this updated version quite a bit. (Editor's note - readers, please do yourself a favor and look up the original Bob Pepper artwork- it was awesome. MB)

A big part of what Iâ€™m enjoying is the shifting goals and strategies. Apart from the core trick taking mechanic of highest value in the lead suit taking the trick, nothing is constant. Thereâ€™s no universal trump suit, no standard bidding process, and no points earned for taking or not taking tricks. Each round is a blank canvas with scoring painted on by the person sitting in the Rulerâ€™s seat. One round may see players avoiding taking any 6s with another seeing a single player trying to take all the Borgia family cards.

The current edits are visible to everyone, while the Sinnerâ€™s Indulgence looms.

These scoring opportunities come by way of Edicts. The ruler will choose from one of the 3 visible Edicts to impose their will on the playing field. All of these Edicts are worded as negative commands. â€œDo not take the first or last trickâ€. â€œDonâ€™t take the last Mediciâ€. Anyone who disobeys the rulerâ€™s Edict will pay them in shiny coins or large chunky jewels. Round and round we go for 3 full rounds until the winner is the person with the most influence â€“ money. This wouldnâ€™t be the Italian Renaissance however without the opportunity to give in to your deepest desires and sin. A player can grab the Edict from the rule and flip it over, now attempting to do the exact opposite of what the Rule stated. This is typically harder, though more lucrative for the person attempting to Sin and is a big part of where Indulgence begins to shine.

Indulgence is a tactical game, but it is also a game of uncertainty. There is no general strategy to follow, no way to look at your hand immediately after drawing and have a good idea for how youâ€™re going to play. The Edicts chosen, the chance that someone Sins, and the looming threat of the powerful Papal Bull all serve to change the political battlefield represented by your cards. It is rarely sufficient to pick a simple strategy and stick to it. Careful timing around taking and ceding control of a hand is needed to navigate some of the more advanced edicts. The Papal Bull puts all 3 visible Edicts into play at once, often creating a web of complex scoring rules. You can also sin when the Bull is in play; fail and you owe the ruler a pretty penny but succeed and it is an immediate and decisive victory. 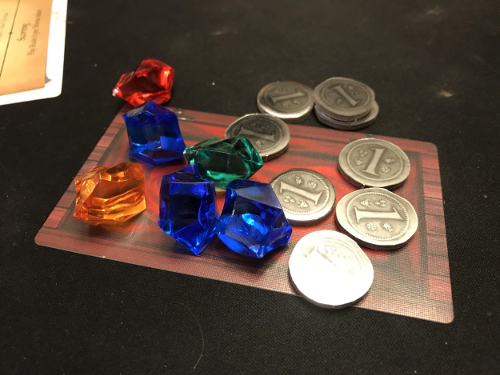 Unfortunately, that tension is not always present. There will be numerous hands full of meaningless tricks where the passing of control is largely irrelevant. Because there is no basic scoring system, hands that play themselves feel particularly underwhelming. The other major issue is the length; the box says 40-60 minutes but thatâ€™s a pretty generous estimate even for an experienced group. That being said, Indulgence is a game Iâ€™m happy to simply play for 30-45 minutes at the end of the night or we wait for someone to navigate Chicago traffic.

Indulgence surprised me. Itâ€™s less a trick-taking game than a game of objectives employing trick-taking as a mechanic. Itâ€™s imminently approachable and I very much enjoy navigating the typical tactical puzzle presented by each hand. While they donâ€™t always shine, an individual hand typically moves fast enough to put behind you quickly. This may not make my Game of the Year list but Iâ€™m certainly going to keep sliding that indulgent sinnerâ€™s ring onto my finger and attempt to sin my way into an instant victory.