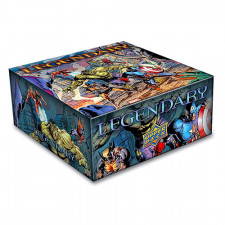 Upper Deckâ€™s Legendary: A Marvel Deck Building Game is an interesting twist on the oft-abused genre of deckbuilding games, arguably the most popular play mechanic of the last ten years. It shares some features of games like Dominion and Ascension, where you are using the value of cards to buy more cards. But in this case, one to five players buy and play superhero cards to beating up on a criminal mastermind and associated henchmen taken right from the pages of your favorite Marvel comic books and graphic novels. While this game is at its core a co-operative game, there is a sort of "alpha hero" who technically wins the game at the end by being the most effective player as determined by the amount of henchmen they captured and hostages they saved.

I'm not normally a big fan of deck building games, which shouldnâ€™t surprise anyone that knows me as one of gamingâ€™s greatest detractors. I dislike them primarily because they all seem to do the exact same thing in an uninteresting and repetitive way, with a very small degree of mechanical difference between them. Most deck builders are exercises in turn optimization, which isnâ€™t what I want out of a superhero game.

Thanks to a simple, intuitive system and diverse, interesting card play, Legendary rises above the pack and delivers an exciting, tense experience that took me by surprise. I'm not even much of fan ofcomic books or even Marvel characters, but the design of the game is so streamlined and fast-playing that it's hard to find fault with it. If there's any weakness to Legendary, it's that it doesn't really deliver any sort of identifiable story or provide much in the way of a narrative. For a genre that relies heavily on narrative and engagement with the characters, this lack should have been a major misstep Luckily, the art and brisk turns keep everyone involved so it's easy to see past the lack of a cohesive story and just accept that for some reason there's a big bad evildoer that needs some smacking down, and it's up to you and up to four of your sidekicks to beat him to a pulp.

Within the box is a veritable sea of themed decks, each of which is dedicated to a character or faction within the Marvel world and during play your deck will be filled with cards from several different characters. I really appreciate the amount of effort that was taken to ensure that card effects and abilities create a true sense that these are a cogent team of superheroes working toward a common goal versus simply having stand-alone characters that operate separately. The way the cards work together is actually very smart, thematic, and if you are a dyed-in-the-wool Marvel fanatic youâ€™ll especially enjoy the team-ups. It's not so much that the game delivers a lot of memorable moments that you'll be talking about for years, but more that it keeps you interested by delivering a system that is challenging and will keep you coming back because of the challenge itself. In that regard, not only as a deck building game, but also as a co-operative game, it is a very successful design.

Legendary is a also a strong enough design that it has spawned numerous deck expansions, each of which gives you new factions to play as well as new challenges to overcome. These expansions are not of the "fix the game" variety that we so often see, but rather they are of the "more of the same" variety, adding little tweaks here and there which both allow you to live out a day in the life of a wider variety of heroes, but also play quite differently. All in all, it's a very fun, short, and exciting game that overcomes its lack of a story with heaps of theme and fan-service, all of which amount to the kind of game that will keep you interested for a long time through huge replay value. It's simply one of the best examples of keeping the rules simple, giving you a great, repeatable experience through variety and challenge.