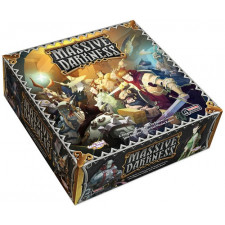 Benevolent overlords Cool Mini or Not switched art and gameplay styles from their typical fare for 2015â€™s Zombicide: Black Plague, and theyâ€™ve followed its success with Massive Darkness, taking Z:BPâ€™s innovative character tray and several of its mechanics, adding a few new ones, and delivering a dungeon crawl experience that polishes some of the formerâ€™s dents and dings, adds a couple new ones and creates an evening of monster-bashing fun. 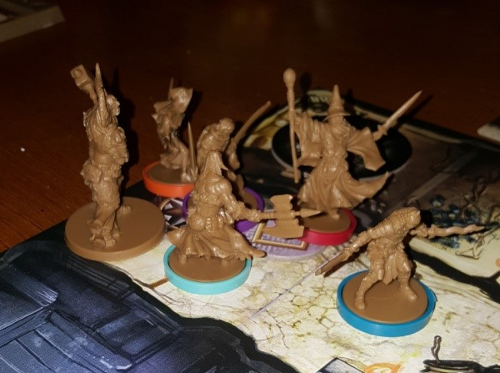 Massive Darkness offers one and a half gameplay modes featuring one or more tabletop quests to defeat monsters, recover artifacts or otherwise save the fantasy world, and attempts to answer one of the beefs of Black Plague through basic math with a Story mode where characters keep levels and skills between quests but making it tougher to acquire those skills at the same time. Both Story and one-off mode work with the gameâ€™s scaling component, since monster toughness is a function of the number of players and how far they progress through the dungeon. In Massive Darkness difficulty level depends on physical movement, not character advancement, giving a sense of venturing deeper into the darkness than Black Plague did. And speaking of darkness, itâ€™s the other new mechanic, and its main purpose seems to be to help the party.

Light and shadow tiles make up each dungeon. Heroes in shadow have a special ability and can hide from monsters. For a team of â€œLightbringersâ€ fighting against the darkness, it feels a bit odd that the players gain more from being in shadow than the monsters seem to, but the dark corners of the dungeon bring a strategic element to the game, allowing the party to dictate the fights by striking from the gloom. This layer is nice, once you get accept that the denizens of the dungeon donâ€™t seem to operate as well in the dark as the players do.

A definite improvement in Massive Darkness is the hero class system. Each hero has inherent abilities and can be combined with one of six different classes to gain skills by spending experience, so while each hero is predisposed toward a particular play style, thereâ€™s no restriction on picking a class, allowing players who want to create a fighter mage or healer thief to do so. Learning to use abilities to max benefit is one of the most rewarding parts of Massive Darkness, and this system creates almost limitless combos.

Speaking of limitless, have we talked about loot? Comparisons to Diablo are apt; the amount of treasure reminds me of a not-safe-for-MM Japanese term and contributes to one of the knocks on Massive Darkness. Between the piles of items, weapons and armor the party discovers as they trek and the free Transmute action (because crafting is the new black), the game bogs down as our intrepid heroes switch from chopping to shopping. While they compare accessories and min-max dice, most of the monsters patiently wait in their rooms to be discovered- but not all of them. 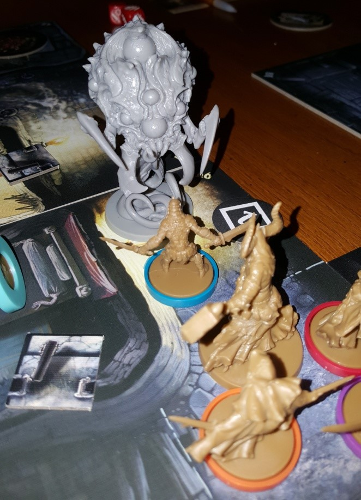 Seriously. Back in your room, now.

Black Plague featured spawn points, a ticking clock eventually overwhelming the party if they didnâ€™t complete their quest. Massive Darkness attempts to replicate this with Agents and Roaming Monsters, foes that can appear either in a room or at the end of a turn. Similar to Necromancers, Agents spawn a group of baddies at the end of each turn, and Roaming Monsters stomp back and forth through the dungeon in search of the party until theyâ€™re killed. Both mean doom if encountered early, but thatâ€™s luck of the draw, not the guarantee the previous game offered. Some quests include a time-based objective to vary the action and keep the party moving, but not all, so Black Plagueâ€™s tension isnâ€™t ever-present in Massive Darkness, and stopping for a math trade in the middle of a dungeon can break the mood. 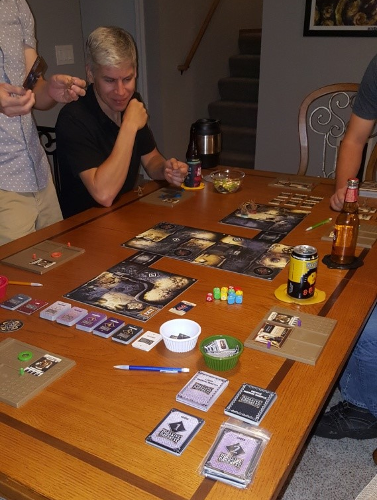 The art of the deal

Massive Darkness has a few gamey elements, and once the party discovers them the catacombs get easier to navigate, but overall it offers a dungeon crawl with more character and monster variety than Black Plague, and loads of dice-chucking, combo-unleashing action. Sure, its Story mode could be easily replicated in Z:BP and isnâ€™t what we hoped for, but if a night of suds, snacks and skull-splitting is your thing, Massive Darkness delivers.