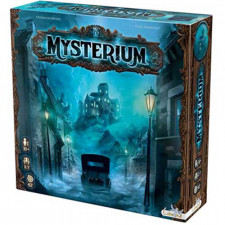 A murder has been committed and the restless spirit of the deceased wants justice. Unfortunately, the official investigation is at a loss. The only hope is to bring in several psychics who will conduct a sÃ©ance, learn from the ghost about the events leading up to the slaying and hopefully identify the culprit. In Mysterium, the players take on the roles of the psychics receiving flashes of insight to cooperatively uncover the perpetrator.

Although it is cooperative one player takes on the role of the ghost. He or she knows the full story (in fact, this player creates it), and the other players become the psychics. Each psychic is secretly assigned one bad actor, one location, and one weapon. Each psychic will have one card of each type they are trying to locate along with a number of distractor cards (not assigned to any player) depending on the difficulty level.

The ghost of course cannot communicate with words. Instead, during the sÃ©ance it provides flashes of insight to the psychics. In the game, this means the ghost has access to a deck of picture cards. The cards have artwork depicting mundane or fantastical creatures and settings. The ghost draws seven and can hand out some to each player.

The suspects are nineteenth century stereotypes: a governess, a colonel, a magician, etc. But the artwork cards are random and fantastical. None of them precisely relate to any of the suspects, locations, or objects. So the ghost has to draw some kind of connection and then give one or more cards to a player based on that. Then, itâ€™s up to the psychics to recognize their visions.

Sometimes that means the ghost will focus on one particular detail. Hey! This card has a bear trap in the corner and the room Iâ€™m associating this with has a bearskin rug. Perfect! Other times, itâ€™s a little more abstract. Maybe the curved legs of an industrial spider mimic the curve of the half open straight razor. But players just get the artwork and have to figure out what is important and why.

The psychics then choose which vision they think was meant for which suspect. If they are right, they go on to guess the locations and ultimately potential murder weapons. If the murder is solved, the players win.

Mysterium is borderline brilliant. The setting and the cards are absolutely evocative. On the one hand, you have cards with nineteenth century motifs which chain you to a historical setting. On the other you have whimsical artwork which functions fabulously as psychic visions. It presents a perfect juxtaposition between the banal and the visionary. As a psychic, you really get the sense that you are seeing fleeting glances from a spirit that can no longer communicate through mortal means.

Plus, there can be a lot of tension for the ghost. He might have a card that is perfect for a later clue (like a murder weapon) so he wants to save it. But that means his hand of potential visions is effectively reduced. Other times, the ghost can struggle to find specific meaning in unrelated art. For the psychics, you strain to find meaning in the artwork. This card has a man and woman on a boat. Does that relate to the sea captain? Or, perhaps the governess since both women are wearing a hat? It can be challenging to discern whether the ghost is zeroing in on a particular detail or trying to communicate something with the gestalt of the picture.

And time isnâ€™t on your side. There are only seven rounds of play. Each psychic has to guess all three of their items â€“ suspect, location, and weapon â€“ within those seven rounds. Every incorrect guess is a setback. And just getting the three doesnâ€™t guarantee a win. The final act is determining which of the suspects the true murderer was. Being in the best position to figure that out requires not only quickly coming to the right conclusion for yourself, but also accurately assessing the visions of the other psychics.

The whole experience is rich in setting and could be highly immersive. The sole drawback to this game is that the ghost hands out vision cards to a psychic, then has to draw new cards, then has to re-assess them, then has to decide who to give new cards to, then has to decide which cards to give, then finally hands them out. Then it starts again. The unfortunate byproduct is that it can be a few minutes between psychics getting their cards. And in a full game with seven psychics, that handing-out-cards phase can be long enough to destroy any immersion otherwise created. Itâ€™s all too easy for cell phones to surface and off topic conversations to break out.

That said it certainly isnâ€™t a deal breaker. And an experienced ghost can cut the downtime significantly. In fact, youâ€™ll generally want your most experienced player to be the ghost for that very reason. But it just seems like a missed opportunity in a game that is otherwise does a phenomenal job with mood and atmosphere.

That caveat aside, itâ€™s hard to go wrong with Mysterium. The cooperative game fosters a lot of discussion between the players. And you get to set aside min/maxing and left-brain strategy for some right-brain enjoyment.

There are so few games in our hobby that stretch the creative side of play. Usually, itâ€™s about out maneuvering on a board or ensuring that you have the most bonuses to your die rolls. When a game like Mysterium hits the market that lets you engage in a wholly different experience, it is definitely worth checking out.