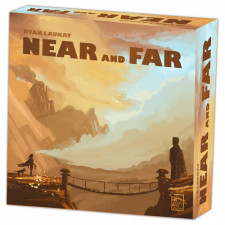 Ryan Laukat has gotten more ambitious with every design, from Eight-Minute Empire to Above and Below and now to his latest design, his works have combined some level of empire building with compelling stories. Near and Far is his grandest work to date, creeping toward a sandbox board game where two to four adventurers make their mark upon the world over multiple adventures, delivering a fantasy experience more akin to The Dark Crystal than Conan the Barbarian, and if you can keep your imagination focused on the story youâ€™re creating itâ€™s possible to ignore the victory point engine that more Euro-minded players are building, realizing that preventing a salamander invasion or reuniting a cave fish with his long-lost love is more important than a final score. It may feel like a participation trophy, but it also allows for a wider experience than the rules dictate.

Like all solid games, Near and Far gives each player a choice of two actions per turn: either go adventuring or visit a building in town. Simple execution with deep strategy, and most of it makes logical sense, so turns flow rapidly for the most part, though planning a series of town actions can make time stand still for a player until they get back out in the wilderness. Sandbox elements abound, with journey points earned by acquiring artifacts, building wilderness camps, and defeating bandits, to name a few options, so players can win the game by fighting their way through the countryside, completing quests, delving for gold and jewels, or more mundane activities. Campaign and Character modes push the win even further, both requiring players to navigate through some or all of the gameâ€™s eleven maps before reaching the Last Ruin, where they get their heartâ€™s desire. Each one creates a different experience, and itâ€™s good the game includes both, since they appeal to different gamers. 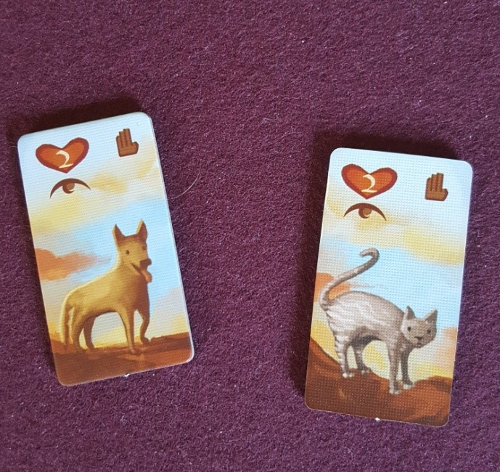 As does your initial choice of travelling companionâ€¦

Eurogamers should follow the campaign path, since it prizes engine-maximization over all, and for me, breaks the magic of the game; thus the rating. Since VPs trump all, a typical game of Near and Far shifts from â€œHow do I want to make my mark upon this world?â€ to â€œCrap, Tim only has two tents left, so the gameâ€™s going to end soon. How can I get max VPs in my next couple of moves?â€ which can break the old-school fantasy spell the gameâ€™s stories and artwork cast over the players. 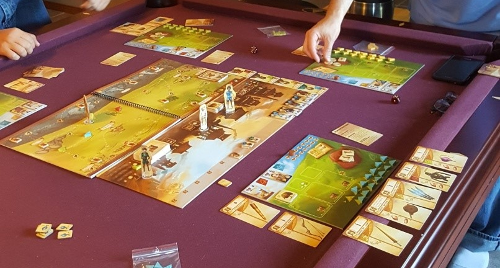 The Third Age was a dark time, filled with calculusâ€¦

Players wanting a deeper experience should try character mode, where you grow a persistent adventurer over the course of several game maps, culminating in the Last Ruin, where their story arc comes to a satisfying conclusion thatâ€™s somewhat dictated by the player themselves. In all games, Near and Farâ€™s quest system presents adventure seekers with two choices to resolve each situation, and unlike Dead of Winter, it clearly states your options. But even at the end of the saga, players have a choice of mark to leave upon the world, for good, ill or even meh, and this is where the game shines for me. In character mode, I decide how my story ends, even if the rules state journey points dictate the winner. My hero powered through over a dozen quests and made the right call at the end, and thatâ€™s all that matters to me. 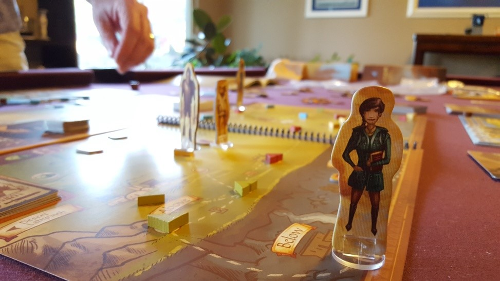 Please, a simple thank you and a statue are all I require.

The only other dent in Near and Farâ€™s armor can either be a Euro-convention or old-school fantasy trope; the heroes are never in mortal danger. It simplifies gameplay conventions and spares feelings, but also takes a bit of the edge off of a quest to rid the countryside of bandits or removes the wild west element from a visit to one of the townâ€™s many Euro-sized buildings, each capable of accommodating one patron at a time. The downside to a failed bandit combat or duel with another player in town is the same: your turnâ€™s over. Thatâ€™s it. Sure, Near and Far doesnâ€™t aim to join the ever-growing ranks of dumbed-down D&D tabletop efforts that focus on an endless string of puzzle-piece assembly followed by rapid dismemberings, but since this is close to a sandbox, I should be able to fill it with the blood of my enemies if I want to, right? 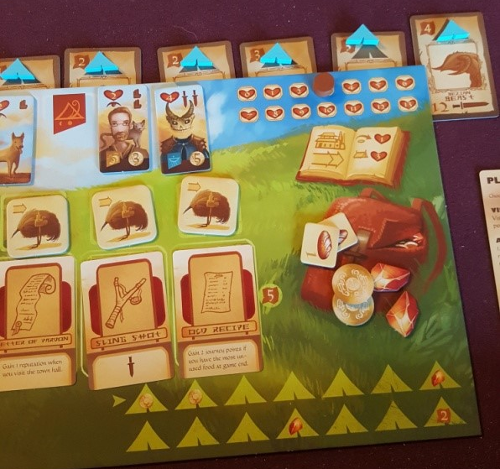 And park tents on my enemiesâ€™ heads.

That being said, Near and Far stretches the boundaries of tabletop gaming in new and different directions, combining new mechanics with a fantastic nostalgia not seen since Tom Cruise rescued a unicorn or Peter MacNicol took on a dragon. While it props its tent firmly upon the victory point pole, it offers plenty of distractions for those who want to focus on the noise, bright flashes, and childhood wonder of what lies behind the curtain.