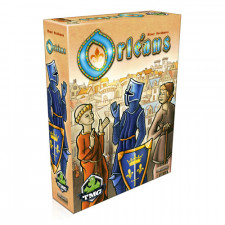 Deck builders have been done before, but not quite like Orleans. While Orleans borrows from among several different genres, it creates something wholly new. Rather than a showcase for independent mechanics, Orleans is a delightful blend that forces unique and interesting choices.

When play begins, thereâ€™s a map of Orleans and the surrounding cities. Players each get a personal board with identical action spaces. Finally, thereâ€™s an empty deeds board that players share. Everyone starts with the same four workers. After the first turn, though, the game diversifies completely. Players place all of their workers into a cloth bag. Then, they simultaneously draw out a number of tiles. From there, they can assign those workers to various spots on their player board in order to take certain actions. Some allow you to travel around the map and build guildhalls. Those are worth points at game end. Others let you permanently place workers on the Deeds board, thus culling them from your bag. And still others let you recruit new workers.

The game lasts for 18 turns (which sounds like a lot, but they pass more quickly than you might expect) and then ends. Players get points for guildhalls, coins, goods, and any citizens theyâ€™ve acquired. Most points wins.

Orleans is an amazing euro game. At its very core, it puts players in constant conflict between tactics and strategy. Maybe I want to expand my available actions by adding a new tile. That means that I have to gain a trader so I can take that action. But that means there is an extra trader in my bag. And if my bag is already trader heavy, I might be drawing more of them on a turn than I can use. I become much less efficient and it becomes harder to use any action â€“ including that new tile I gained.

Similarly, the benefits of gaining a particular worker are matched nicely to their use. There are relatively few actions that require a Knight. But gaining Knights provides perhaps the best benefit in the game â€“ increasing your draw of worker tiles. Similarly, a Boatman only gives coins (not so useful in Orleans). But a Boatman is required in many of the actions. The Monk is a wild card and playable anywhere â€“ but provides no special bonus when taken. Players must strike a careful balance between getting the bonus that they need for their long term goals and maintaining a proper bag consistency so that they each draw, including the next one, will be useful.

While you do draw randomly from the bag, you rarely are punished with bad luck. Orleans provides numerous ways to directly alter the consistency of figures in your bag. When drawn, workers go to a â€œmarketâ€ area. Although space isnâ€™t unlimited, you are allowed to leave workers in the market unused. Doing so removes them from your bag on later turns. Or, you can place them on the Deeds board which gives a small bonus and allows you to remove them from your bag permanently. So if your mix of workers does end up a bit lopsided, you have the tools to address it.

But you donâ€™t always have time to get your bag just right. The game can take on a race as resources deplete. Everything is limited in Orleans â€“ goods, workers, tiles, even coins. Workers fly fast. Farmers zip by quickly if players are competing to be best in the census. Monks also rapidly disappear since they are so useful in taking actions. And, depending on playersâ€™ strategies, other workers will become scarce as well. With four players, it isnâ€™t uncommon to see the majority of worker piles empty before game end.

Even though direct competition is mostly absent â€“ though there is an element of area control when building guild halls â€“ the indirect competition is fierce. And the trouble for players is that all of the workers and their associated actions are good. They donâ€™t directly earn you points, but each of them can assist you in a different way.

And youâ€™ll be forced to react to your opponents. You might be slowly gaining Craftsman and using their technology to make actions easier. Then you realize youâ€™ve neglected Scholars and they are almost gone thanks to a push by two of your opponents. Now, you need to get in there and fast before youâ€™re entirely deprived.

The one area to watch out for is that players might fall into preferred habits and patterns â€“ constantly grabbing the same tiles and seeking out the same workers. In other words, the near endless possibility of Orleans might be stymied by player preference. Of course, the random draw mitigates that somewhat as players wonâ€™t always be able to do exactly what they want. But itâ€™s worth noting that players who like to explore will have more fun than those who always follow the same course. Orleans brings surprisingly aggressive indirect interaction, and the competition for pieces is fierce. It also brings one of the best, most fun, entertaining experiences in euro game Iâ€™ve had in long, long while.