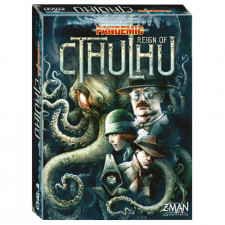 Pandemic: Legacy, Pandemic: Iberia, Pandemic: Reign of Cthulhu, Pandemic: North Pole, Pandemic: This and Pandemic: That. This game has spread and mutated like one of the many diseases embedded inside its cardboard ecosystem. I know youâ€™re not sick of that gigantic tentacle elder god just yet so roll the sanity die and dive into Dunwich.

â€œGive it to me straight, Charlie.â€ You want to know if this is a cash grab and if the theme was slapped on or if maybe, just maybe, this game is actually quite novel and fun. I hate to break it to you, but this may just be a superior design to its stoic father.

Pandemic: Reign of Cthulhu still features players cooperatively jumping around a map and putting out proverbial fires. Here theyâ€™re not vague color-coded diseases but vague hooded cultists. The map features different fictionalized Lovecraft cities such as Arkham and Innsmouth, with spaces on the board corresponding to different neighborhoods within each city. When a space is overloaded with Cultists, they pop and one of the randomized face-down elder gods is flipped.

This is bad news as it will typically trigger a new permanent special rule as well as taking you one step closer towards almighty Cthulhu rising. If Cthulhu awakens from his slumber itâ€™s literally all over. Weâ€™re talking fire and brimstone coming down from the skies. Rivers and seas boiling. Human sacrifice, dogs and cats living together â€“ mass hysteria. 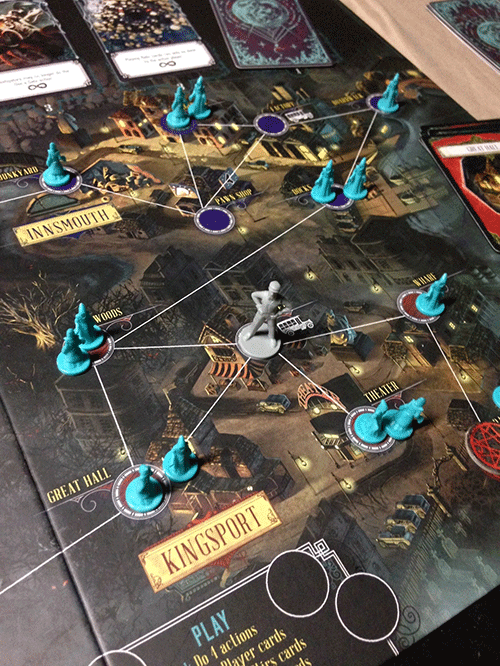 When did Kingsport turn into a twisterd version of Munchkinland?

This is a more frantic, wild game than its predecessor. The map is tighter and you can more easily bounce around, but challenges rear their ugly mug more often. The Evil Stirs (Epidemic) cards shuffled throughout the deck cause a proliferation of dread and produce Shoggoths, little cute plastic minis that b-line towards gates on the map in an attempt to speed the elder god trainâ€™s arrival.

These Shoggoths are scary. If you end up in their space you have to roll the hot new sanity die. This causes your character to take another step towards insanity, which means you have to flip him or her and deal with reduced capability. This is a nice touch of unpredictable drama in a design space that typically is focused around solving a core puzzle.

Shoggoths also take three precious actions to defeat. This means youâ€™re not jumping around Innsmouth and killing fish-men because youâ€™re too busy dealing with that tentacle horror thatâ€™s trying to swallow the playground. Pandemic: Reign of Cthulhu is all about efficiently cleaning up those messes and Shoggoths stick a big gooey limb in the way. 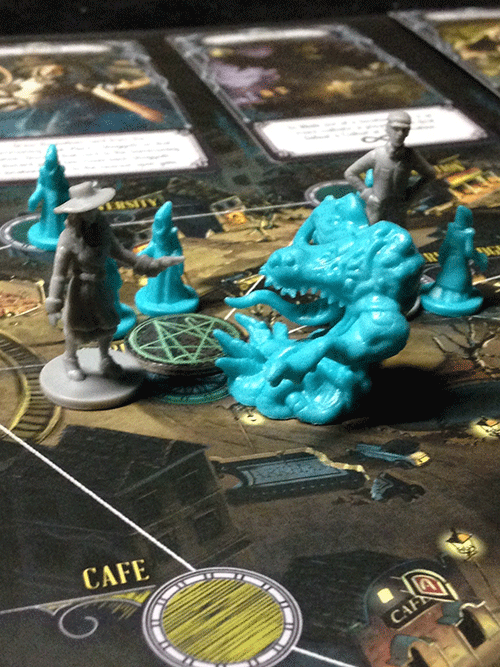 Umm, sorry. Can you point me in the direction of the lavatory?

While dealing with all of these evil horrors you have to keep your eye on the ultimate goal. Youâ€™re trying to amass five cards of a specific color-which represents one of the four cities in the game-so that you can move onto its corresponding portal and close it for good. This is the analog to curing a disease in original Pandemic. Itâ€™s somewhat easier here as the colors correspond to areas and you can trade a Dunwich card with another player as long as youâ€™re both on a Dunwich space. This simpler trade system is necessary to combat the rabid pace of the spread of evil. Itâ€™s nice though to have a stronger reason to communicate and coordinate efforts.

Iâ€™m also a big fan of the mysterious artifacts you acquire. These will eat away at your sanity but provide powerful effects that can tip the scales of madness in your favor. Itâ€™s a clever way to replace the special action cards in Pandemic by utilizing theme, and they donâ€™t feel as though they just swapped out images or graphic design. Utilizing these items effectively is a huge factor in hanging on to win the game.

As a whole Iâ€™d say this game is more difficult than Pandemic proper. It also boasts a stronger narrative tied to those Shoggoth encounters, portal closings, and unexpected great old one alarm clocks firing off. Itâ€™s an interesting design that doesnâ€™t feel as though they took the easy road to Râ€™lyehand just slapped a Cthulhu theme on an existing engine. This feels like its own distinct thing with personality to boot.

At the same time, Reign of Cthulhu may be a difficult sell. It features improved systems and a more frantic pace, but youâ€™re still collecting cards and smothering hot spots. That same epidemic shuffle the cards and place them back on top system is here. Itâ€™s largely the same engine with a new body. The miniatures are solid and the board art is some of the best Iâ€™ve seen, but Iâ€™m not sure this is a mandatory buy.

Whether you take the plunge and submit to the growing madness or just stick with the classic self-titled album is ultimately up to you. Thereâ€™s a lot here to like and the production feels genuine. It may be blasphemy, but as I said, I think overall this is a more exciting and dramatic version of the core design and one Iâ€™d happily play over the previous iteration.