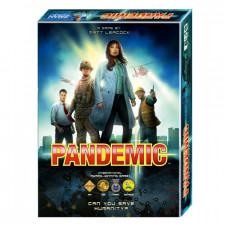 Pandemic is one of the games that I believe should be owned by every person who likes games, so let's get that sorted out right up front. I could give you a dry assessment of the game, but that's not much fun, so here's how it is. The game is about staving off the mass extinction of humankind, and you're the only thing between four pathogens and humanity. That's it in a nutshell. I cannot overstate the brilliance of this game, because it is truly a classic hobby board game that I still play once in a while, seven years later. The new, 2013 edition is almost identical in play and design, although it has a much-improved look, and adds a couple of new cards which don't change the game very much, but add some more variety.

What makes the game so great is not just the novel theme. What makes it great is the core design and the intensity of the tension that players experience. There have not been, to this very day, too many games that have found a way to combine ease of learning, fantastic game play and nail-biting tension the way that Pandemic manages to. It's the kind of game where you are always on your heels, right up until the end. The icing on the cake is that it's a pure co-operative game, and the game has only one way to win but several ways to lose. So, it's literally your team against the microbial forces of evil, and it's up to the players to act together to conquer the threat. If this game has a flaw, it's not in the design as much in the way it allows "alpha" players to bark orders at other people, which is a real phenomenon, but I'd argue that this is a hallmark of excellence, because the game is so good that those people care enough to turn from normal people to tyrants.

The rules are quite simple, but the strategies are legion, which is another hallmark of greatness. The game literally takes ten minutes to set up, ten minutes to learn, and an hour to play, but this is the kind of game that sucks you in, and has you playing over and over until you win. It's rare that a game has that power over players, and that people care enough about the outcome to give it another go, back to back, until the game is won. I think the key to this is that the game is so utterly unforgiving, just as pathogens are in life, that you are invested so heavily in victory that when you lose, you immediately second-guess yourself and want to play again to avoid the mistakes you made last time. Here's the catch, though: The game state is never the same between plays, so you really can't go back and revise your actions last game because the same scenario will not come up again next time. Again, it's a marvel that you even have those kinds of thoughts, knowing the game will not be the same. It's really that good.

The nuts and bolts of the game are simple, which makes it good for anyone above the age of ten, give or take. Players choose a role card, which is their 'avatar' in the game, and of which there are five, or seven in the new edition, and which allow players different, character-specific special actions on their turn. One of the greatest strengths of the game is in this very thing; players must act in vastly different ways based on their chosen role. Some roles offer a support function, spending actions to help other players on their turn, while some are direct-action roles which will contribute directly toward defeating the pathogens. Others are more proactive, preventative roles which stop things from happening before they become a problem. All things considered, this is one of the best examples of variable player powers that exists in the market.

Actions during play are quite simple as well - you can move around the board either using cards or to an adjacent space, remove pathogen cubes from an infected city, build a CDC lab, take your special action, or perform research. Considering the limited amount of choices, it would, on its face, seem like it's very limited. The reality is that every single move must be weighed, every action you take measured against the current board status. This, friends, is the definition of white-knuckle gaming. If you're someone who thinks that rolling a die to determine an outcome of something is the pinnacle of tension in games, you might be right, but this game has no dice and it delivers the same kind of sphincter-snapping tension that needing to roll a certain value at a crucial moment does.

Add to this that the game actively seeks your defeat, almost as if it has a living, evil soul, because cards are played to the table upon every turn, and these put more pathogens on the board, and they always seem to come when players can least afford it. Worse yet are the "epidemic cards", which essentially cause maximum carnage, many times causing a city to explode with infection, spilling over into adjacent ones. The game is brutal, unforgiving and a downright evil bastard. That's what keeps bringing us back and it's why, seven years later, I am still playing it. It's literally a design for the ages.

If you've never heard of Pandemic before reading this, you're probably new to hobby gaming, so allow me to be one of the first to welcome you into the hobby, and also, go buy this game! If you're already a hobby game aficionado, and you've never played Pandemic, then you've missed the boat, and you really should go get this game, like yesterday. Very few games are so incredibly well designed that I recommend it to every single person on the planet, but this is one of them.