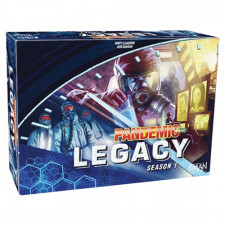 There were moments in Pandemic Legacy where I felt like I was playing one of the best games ever made. I was as invested in the outcome as Iâ€™ve ever been, agonizing over the permanent consequences of every decision. Then I would inevitably have to stop playing at some point, and little issues would pop up in my head. Almost all of these were minor, but as they accumulated in my mind they pulled the game back down from the realm of triumph, and into the realm of â€œvery good.â€ The legacy format (previously utilized in Risk: Legacy) is the source of some terrific elements, but it proves to be a double-edged sword in some vital ways.

By this time the original Pandemic has attained the highest honor paid to hobby games: mainstream success. It can stand alongside titles like Ticket to Ride and Dominion as games that a lot of non-gamers know and enjoy. This familiarity serves Pandemic Legacy well, because it allows the new mechanics to be digested more easily. And there are a lot of new mechanics, some that will be entirely mind-blowing to people who missed out on Risk: Legacy. Like a campaign game, Pandemic Legacy takes the players on a set narrative. Each game session represents one month in the year. If you win the month you move on to the next, but if you lose you have one more chance to win that month before moving on. That means the entire narrative will last anywhere between 12 and 24 games.

The truly fascinating part is what happens between sessions. The players are given new missions to accomplish, and new narrative wrinkles develop as the year passes. These wrinkles alter every game that comes after, as well as the physical game. That means that the board and cards themselves will be altered or destroyed depending on what happens in the game. There is a huge sheet of stickers to mark changes, a deck of cards giving extensive plot twists, and little spaces to name characters and diseases as the game goes on. Each month also brings new mechanics to the game, introducing new challenges to the players and new ways to deal with them.

These physical alterations to the game are meant to be permanent. That will give some gamers the shakes, but I found it exhilarating. This was a copy of the game that was unique to our group. It has its own cards and map, unlike any other copy. We enjoy revealing new elements and considering how our game will take shape in a way that is all our own. The physicality of these changes are the best thing about Pandemic Legacy. It takes advantage of player choice in such a way that you change the very game itself, and it is a powerful experience. It also lends more weight to in-game events, such as outbreaks in specific cities, which can now damage characters and the city itself. We have had many games that looked like a slam-dunk, but then unraveled at the last minute, all of which are given more detail and investment because it changes the very game itself.

The narrative itself is more of a mixed bag. I donâ€™t mean the plot itself, which is about the level of a potboiler airline novel, but the way it is parsed out. The big narrative beats are shared on cards that are revealed between games, but the players donâ€™t have a lot of say in how these come into play. One on level, this isnâ€™t a problem. There are many plot elements that should be out of the playersâ€™ hands, such as orders from higher ups or changes in different diseases. But there is never a point when the on-board action actually affects the narrative beats in any way. The choices the players make have future consequences on gameplay, but the plot will play out more or less the same for everyone. This is especially true because every month happens for everyone. Even if you lose the same month twice in a row, you will eventually see everything this game has to offer. The details, as represented on the cards and board, will be different, but not the broad strokes.

This is a tough problem to discuss, because Iâ€™m not sure what could have been done differently. Itâ€™s not like you can replay a legacy game when you finish up, so itâ€™s a good thing everyone can see everything. But on the other hand, there is a sense that you are never in danger. No matter how hard the game collapses, you will always make it to the end, making everything feel just a little safer than a game about worldwide pandemics should be. It robs players of agency as well, since all of those physical changes donâ€™t have all that much impact on the big picture. I wonder if it might have been better to have some kind of branching narrative, changing the story itself depending on the in-game action. But then itâ€™s obvious that great care was taken to give us the game we have, and I wouldnâ€™t trade in those experiences at all. This is a big triple-A release that wants as broad an audience as it can get, and the possibility of real failure, as thrilling as that might be, would probably work against that.

Anyway, itâ€™s foolish to wonder how a great game could be made even better, when what we have already is a whole lot of fun. It seems like the choice was made to make this game accessible and balanced rather than unhinged and dangerous, and I can certainly respect that. What we are left with will rightfully be regarded as one of 2015â€™s best new releases. It might feel like you are walking a tightrope with a net, but even then you are still walking a tightrope.