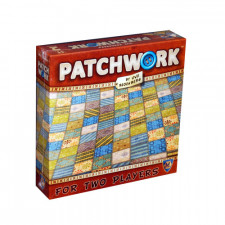 It took me a little while to realize it, but there are actually two different games contained in Patchworkâ€™s small box. The one I played first is a light and whimsical game of side-by-side Tetris. Some very light resource management ensures thereâ€™s an edge to game that is otherwise as soft as a childhood quilt. That Patchwork is friendly. The second game is something altogether different. Itâ€™s deep and tense. Itâ€™s the kind of game that leaves spouses stewing across the table, shooting glares made of needles at each other. That Patchwork is mean. 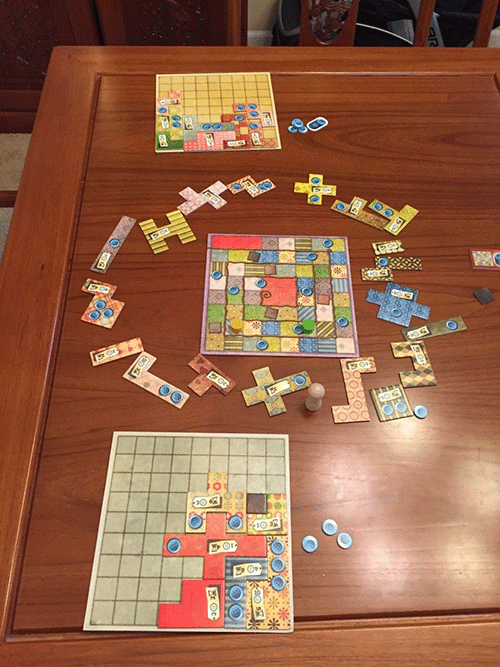 The game doesnâ€™t start that way. Early on you both have a rather limited pile of buttons â€“ your currency â€“ and a wide open board. The 33 patterned cardboard quilt pieces arranged around the board lay there casually. Youâ€™ve typically only got one or two options that you can afford, and unlimited spaces to fill, so early choices are dictated primarily by how many buttons are printed on the tile. Buttons are both your currency and give points at the end, so getting a tile with lots of buttons printed on it early is great.

As you progress, the game begins to tighten. There are ebbs and flows to your button count, and it becomes easy to recognize when certain tiles are key to your board. In the first Patchwork, the nice fluffy one, this portion of the game feels like a puzzle. Youâ€™ll horde your buttons for the really long piece that will fit along the side or maybe the wonky one that will fit just right. Your quilting hopes and dreams will depend on your ability to count how many buttons you need, and maybe occasionally on whether or not your opponent also needs the same piece.

In the mean Patchwork, the one with tiles like knives, this portion of the game is brutal. All those tiles you bought with impunity in the first phase have now created a tapestry of odd shapes and lines you need to try and fill in. Itâ€™s at this point that you remember that every empty square on your board at the end of the game is going to cost you two points. Itâ€™s also at that point that your opponent realizes just how screwed youâ€™d be if they took that T-shaped piece before you. Or even if they just took the one that comes after it. Because youâ€™re limited to choosing from the three pieces in front of the one most recently purchased, they can block you from a tile without even having to buy it.

This leads to an agonizing back and forth. Every tile is crucial, and now that youâ€™re flush with buttons because you built a strong engine itâ€™s tempting to start buying the biggest, baddest, cotton squares. And thatâ€™s when Patchwork steals your covers and kicks you out in the cold. Because the most critical resource in Patchwork isnâ€™t buttons, itâ€™s time. Every piece you buy advances you inexorably forward along the time track. What makes this particularly brutal is that whoever is furthest back on the track gets to take a turn. If youâ€™re 7 spaces ahead of your opponent because you bought the only piece you can squeeze into your manic board and they buy a 2-Time piece, theyâ€™re going again. And again. And again. And theyâ€™re going to smile at your while they do it. 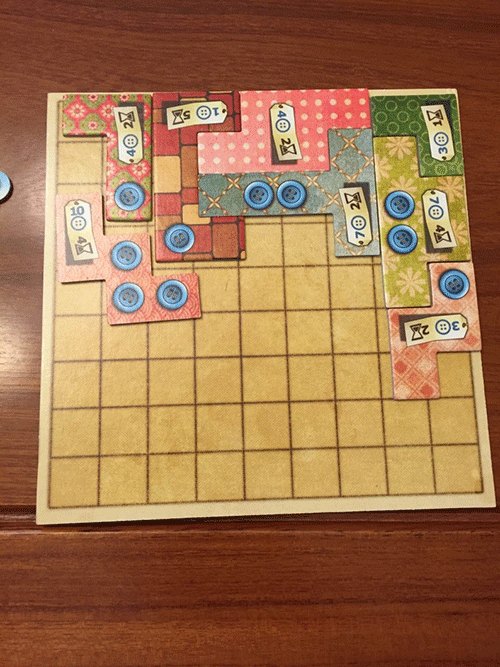 There is no doubt that Patchwork is a mean game. It pushes you around for 20 minutes before, if youâ€™re like me, humiliating you with a negative score. It knocks you off your feet while your opponent points out the flaws in your board. In this? A game about quilts? Rosenberg has wrapped a bomb in patterned fabric and casually dropped it on your kitchen table. But make no mistake, thereâ€™s danger and tension in that box.

I donâ€™t hesitate at all to say that Patchwork is my favorite Rosenberg game. The simplicity belies a strong game with more tactical depth than half the miniature filled dungeon crawlers Iâ€™ve played. Patchwork deserves a place on the shelf of anyone who is looking for a two player game. And while itâ€™s a shame the player count isnâ€™t higher, that may be a blessing in disguise. Iâ€™m not sure my game group could handle a four player Patchwork fight.