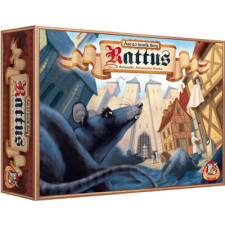 How do you get a Eurogamer to play a war game? Disguise! Substitute generals with special roles. Replace guns and steel with germs. And rather than marching dudes across a map, push tokens around representing an army of rats. Afterwards your budding wargamer may not be ready for Falling Sky or The U.S. Civil War, but heâ€™ll be a better person for the experience, nonetheless.

The goal in Rattus is callously simple. There are no victory points. You do not conquer territory. Youâ€™re not constructing buildings, plying trade goods, tending farms, chaining combos, connecting routes or creating efficiency engines. In a game about the Black Death there can only be one winning condition: survive. Although acted out upon a map of Europe, players do not represent any particular nation. Rather, your nondescript population will scurry about the continent like rats, while you direct biological warfare against your opponents.

Every turn you perform three actions and then resolve the Plague, if necessary, which it generally is. First, you may optionally select one role from the center pool or another player. These grant special rules-breaking abilities, but also increase the likelihood that your population will succumb to the pestilence. Next, you add some population cubes to a region. Then you move the Plague marker to an area adjacent to its current location. If that territory contains rats, one or more tokens will infest neighboring countries. 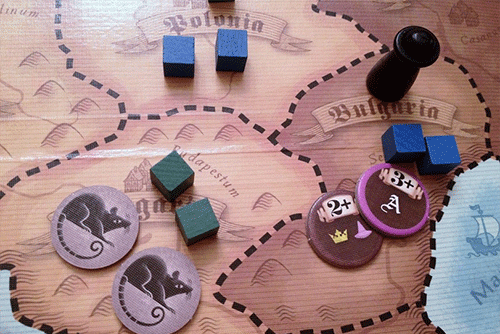 If the region to which the marker advances contains both rats and people, the Black Death rages. To resolve its effects, flip over a rat token. This determines who dies and whoâ€™s not quite dead, yet. If the areaâ€™s total population meets a certain threshold on the rat token, players lose cubes based on majority, roles owned or just for being in the wrong place at the wrong time! As long as population and rats coexist, you continue to resolve the Plagueâ€™s effects until they donâ€™t.

This simple turn structure continues until one of two scenarios: the supply of rat tokens is depleted (most likely) or one player manages to place all of his/her cubes on the map by the end of a turn (not likely). At that point, each successive player gets one final spin, but isnâ€™t immune yet! At the end, the Plague ravages the entire continent as every remaining rat token is resolved. When the carnage subsides, the player who lost the least wins. The straight-forward repetitiveness makes for an easy to teach and accessible gateway game that still offers really cool decisions.

For a Eurogame Rattus is shockingly spiteful. You are deliberately spreading the pox so that it will eradicate your opponentsâ€™ population, directing the Plague to regions where you have little to no cubes, but hopefully other players have plenty. And preferably more than one rat token to increase its lethality. An interesting characteristic to this offense, however, is that itâ€™s not terribly personal. The Plague is going to do its unsavory business, anyway. There is more than enough work for the Grim Reaper â€“ everyoneâ€™s going to lose plenty of people. Plus the game is light and moves at a good pace. As such, this delightfully cutthroat design is a good introduction to player interaction, spite and, yes, even war games. 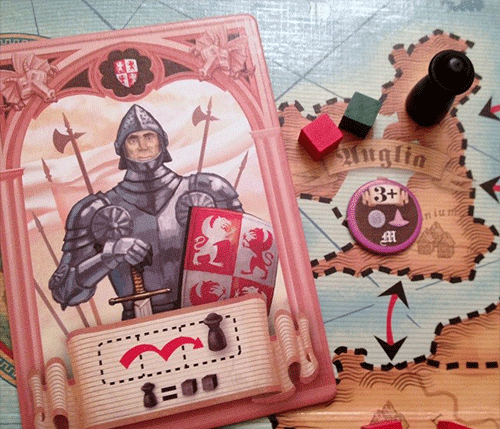 Your field commanders in this germ war are the roles, and much of the gameâ€™s strategy hinges on their selection. They allow you to manipulate population, rats and/or the Plague beyond a turnâ€™s normal structure, which translates to power. But when you own one, itâ€™s yours until another takes it. And the more you possess, the more vulnerable you are. In a game about minimizing losses, the balance between wielding greater control whilst assuming greater risk is anxiously fascinating, wrought even more tense by the epidemicâ€™s unpredictable whims.

While spreading horribly contagious bacteria sounds awful, it works thematically in Rattus. Yes, itâ€™s a game about a malady that killed half of Europeâ€™s population. Thereâ€™s no denying that and the subject matter could likely turn-off some people. However, historically aloof and ambivalently abstract, the design is light enough to distract you from those facts. Itâ€™s certainly never graphic or in-your-face. The components also sanitize whatâ€™s happening. Theyâ€™re all perfectly standard Eurogame fare. And cubes effectively remove any sense of humanity. Itâ€™s difficult to imagine putrefying, festering sores on a cube. Picking off generic cubes one-by-one, then, makes spreading a horrific contagion to millions of souls more palatable.

Rattus is a simple, straight-forward design with an interesting premise. If people can look past the whole idea of infecting and killing each other off with a fatal pox, itâ€™s a great game to introduce interaction and spite â€“ even a good title before launching into war games. Youâ€™ll find some hidden depth with fun choices. Donâ€™t let this diminutive title, like the fleas that really bore the Plague, go unnoticed. Easy to teach and play, this light Euro with fun confrontation will prove a good gateway to infect those not yet bitten by the board gaming bug.