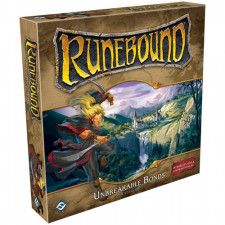 Kyle: A good adventure game is harder than it looks to pull off. Runebound Third Edition, however, does it excellently, with an appropriately epic journey across an interesting game world, meaningful character growth, and a dynamic narrative that builds to an exciting conclusion. This new expansion, Unbreakable Bonds, overlays a cooperative and solitaire game structure across the gameâ€™s already solid design, and it does so with success, for the most part.

This expansion both converts several old scenarios into cooperative play and introduces new ones specially designed for the game mode. A few new wrinkles are introduced as well, but by and large, it plays like Runebound without too much deviation from the standard game: always a good thing in an expansion, I think.

Raf: I agree. It integrates rather seamlessly and within only a few rounds feels like it has always been there or at least that it always should have been. I donâ€™t mean to say that the core experience feels like it had things stripped out, just that incorporating Unbreakable Bonds is almost effortless. I think the biggest and best addition is the combat boards. Giving each monster type its own set of tokens and combat AI (of sorts) really elevates the whole Runebound experience and is something I plan on using whether I play cooperative or not. 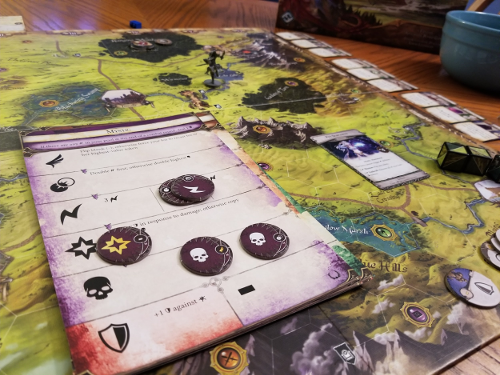 The most exciting flowchart FFG has ever produced.

Kyle: The combat boards help make the experience. Where previous monsters had to rely on unique abilities to make them feel distinct from one another, the combat boards really draw you in, making it feel as though youâ€™re fighting a tricksy sorcerer or a slow, lumbering troll. They complicate things a little too much for my taste and sometimes clash with some of the base gameâ€™s monster designs, but overall I think the payoff is well worth it.

So I do like this expansion. I think my only hesitation is really that some of the scenarios end up feeling a little too much like â€œRunebound with a co-op add-on,â€ rather than a natural evolution of the base game.

Raf: I will say that the co-op part of this expansion is my least favorite part. It works fine, but it also felt unnecessary as the core game was already almost co-op and featured some options, like bartering, that encouraged sharing. The party skills in this are nifty but actually banding together as a party doesnâ€™t seem to happen all that often and the benefits arenâ€™t that exciting. Itâ€™d be one thing if we could enter combat together, pairing our attacks and truly cooperating. That would make the co-op parts of the expansion exciting and not just functional. Only having access to limited opportunities to aid each other if we elect to learn those skills is a little underwhelming. 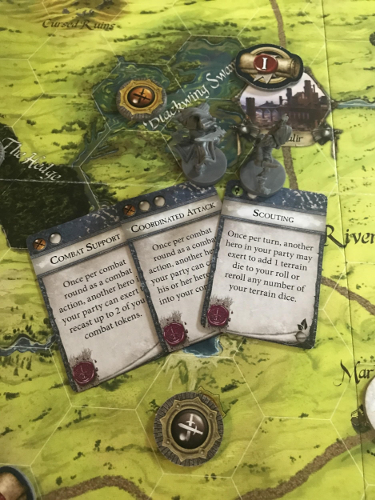 Fun when it works...

Kyle: Exactlyâ€”sometimes it felt as though the stars had to align before youâ€™d actually be able to help each other, in which case youâ€™re playing Runebound with a cooperative house of cards built on top.

I do want to stress that this is primarily a criticism of the scenarios, which feel a little too much like a hokey version of Pandemic played with the Runebound pieces. Overall, all the new stuff integrates so nicely, as you said.

Raf: Man I am really happy the new scenarios werenâ€™t just Yet Another Big Bad Coming To Get Us but they certainly add a bit of rules overhead that is frustrating to grapple. As usual, the new quests and adventures add a thematic touch - I particularly enjoyed the â€œSiphon Blood from a Sleeping Dragonâ€ quest in the new Plague scenario - but boy are they a little fiddly.

I will say that I think the envelope system is a clever touch. Iâ€™ve always thought Runebound did an admiral job of making the world feel both lived-in and as if things were happening around you and being able to mail each other whispered Rumors to share quests is a really nice little touch. Itâ€™s such a simple mechanic, but it makes me smile. 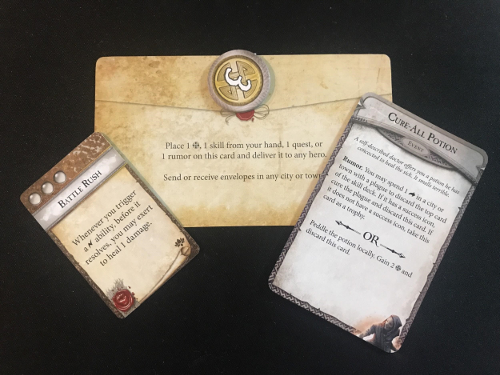 Kyle: Yeah, they really went above and beyond for that one. And it was totally unnecessary, just a little flourish that did such a great job of fleshing out the fairly generic world of Terrinoth just a little bit.

The gameâ€™s new events that pop up while you shop in the market are a brilliant little touch. The base game could become a bit of a mathematical exercise at points, as players traversed the land and calculated exactly how much gold they needed to buy that magic suit of armor or hulking greatsword. Now, events can reduce the price of items or have you stumble upon a bustling flea market with tons of great stuff you can use to beat the snot out of monsters with.

Raf: Another excellent addition is the new Prepare action. Itâ€™s the smallest thing in this expansion but boy is it welcome. Ending turns with a wasted action is rare, but annoying. It usually seems to happen when I make it to an Adventure Gem on Action 2 and now need to wait a round until I can actually explore. The addition of a way to bank that action into a future turn is, like differentiated monster combat, very obvious and very welcome. In fact, apart from party skills when I donâ€™t want to play true co-op, I think I will be integrating every aspect of Unbreakable Bonds into every future play of Runebound.

Kyle: Thatâ€™s the nicest part of this expansion. Even if the scenarios didnâ€™t connect with me like some of the earlier ones, you can simply toss in the stuff that works and ignore the stuff that doesnâ€™t. I didnâ€™t find myself using the Prepare action very much, but it doesnâ€™t hurt anything to include it in the game, and it was a super-obvious addition. In fact, I find myself wishing more of Fantasy Flightâ€™s expansions would go this route, rather than forcing you to decide which bits and pieces you want to play with each time you kick off a game. A time-consuming process like that makes me not want to even open the box due to expansion bloat and fatigue.

Raf: We have a little bit of that, with the skill decks and token sets that are becoming more numerous and voluminous. Overall though, youâ€™re right. This expansion doesnâ€™t make it any harder to actually play the game. Iâ€™m running out of storage space in my box and desperate for an insert but I can easily add anything from Unbreakable Bonds without adding much time.

So do you recommend it? Iâ€™m pretty close to declaring this expansion â€œmust ownâ€ simply for the monster boards and things like the envelope and prepare action.

Kyle: I do recommend it, though I like the base game so much I donâ€™t think itâ€™s essential. It is, however, permanently integrated into my base game, since the new skills, market cards, and heroes are seamless to toss in, and because the new monster combat just makes everything that much better. And if you prefer the old combat or your players want to control a monster for a combat or two, no big deal. Itâ€™s modular enough to just swap out as needed. All in all, a great expansion for a great game.