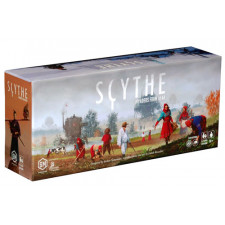 One of last year's most successful games -and in fact one of my Game of the Year picks - was Jamey Stegmaier's brilliant Scythe, a stunning piece of hybrid design that featured a unique setting, great illustrations, and compelling economic mechanics to illustrate its themes of agrarianism converting to militarism. But as anyone who has played the game will recognize, there were two additional factions already represented on the board but with no components in the base game box. Invaders from Afar gives Scythe players those two new factions and increases the player cap from five to seven, which is something I would advise only for a table of experienced players who know how to properly overlap turns to keep downtime low and the game moving forward. As the rules state, it's about 25 minutes per player so with a full table you might be adding an hour or more to the game time. With that said the two new factions are interesting and will add some variety to the game even if you are only playing the excellent solo option. 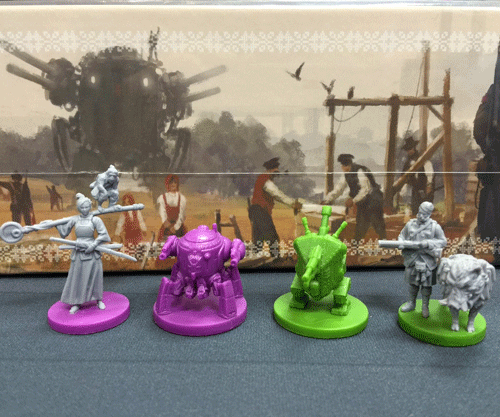 Animal buddies are one of the coolest parts of the Scythe world. The mechs are kind of cool too, I guess.

The new factions are Albion (roughly equivalent to England/Scotland/Ireland and represented by a Highlander accompanied by a massive boar) and Togawa, an Asian-themed group led by a female Samurai with a monkey companion. These sides are interesting in terms of their variations on existing abilities and mostly integrate seamlessly, although there are some modifications to the Crimea and Polania player boards necessary when playing 6-7 player games. But I would also regard Albion and Togawa as somewhat "advanced" factions more suitable for seasoned veterans. Each of the newcomers has a new ability unlike those in the base game. Albion is specifically out to claim new land so they can stake claim by placing flag tokens on occupied territories that increase their end game scoring value. Togawa can set traps, tokens that incur a penalty of popularity, power or combat cards when an opponent moves into a trapped territory. Both of the abilities are fun but not necessarily game-changing.

Essentially, this is really just a more players/extra factions expansion and I'm sort of torn on that. On the one hand, Scythe is fine how it is and it doesn't need anything on top of it that might jeopardize its very refined, highly developed gameplay. But on the other, I would not have complained about seeing some new encounter and factory cards in particular. And I am also not sure I would actively court playing the game with 6 or 7 players as 5 seems to be where it is the most comfortable. Granted, it does seem like there is more friction (and therefore conflict) with the extra factions on board so that may be a case for the expansion in itself, but I think most players will find more value in rotating the new factions in and out of the core set.

Regardless of whether you want to go all in for an epic 7 player game or you just want to go solo with one of the new groups, at the low price point this is a must buy for fans of Scythe. I especially like how the new factions provide flavor outside of the Continental Europe/Russia sphere, which in turn makes the game world feel more developed. Of course, I also love having two new sets of agricultural mechs and more Jakub Rozalski illustrations to accompany it all.