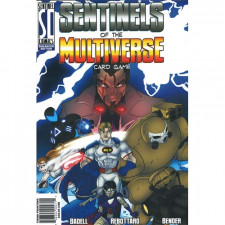 Sentinels of the Multiverse Buyer's Guide

The Sentinels of the Multiverse line began as a small title released at GenCon and has grown into a powerhouse across multiple expansions and additions. It deftly marries strong gameplay with an undeniably compelling superhero narrative in every play. Both small and large format add-ons have made collecting this series into an ongoing affair. So if youâ€™re getting into Sentinels, hereâ€™s what you should be looking at.

Sentinels of the Multiverse: Enhanced Edition
This is the new and improved base game. It comes with ten heroes for you to choose from including what will undoubtedly be some of the most popular at your table, like Legacy, Tempest, and Wraith. It also features four villains that provide different experiences and difficulty levels. This should absolutely be your first stop on the Sentinels train.

Rook City / Infernal Relics
Originally released as two separate expansions, they have been combined into one big box. As a combination, this expansion adds huge value and provides more content than any other. Youâ€™ll get eight new heroes, including the tricky Argent Adept and Richard Launius designed Nightmist, as well as four new villains. The Chairman is one of the most difficult villains in the game while the Ennead allows you to fight a cohesive villain team.

Wrath of the Cosmos
Like Shattered Timelines, Wrath of the Cosmos introduces four new villains and two new heroes. All of them are fun and interesting additions. Of course, if youâ€™ve already grabbed all of the must-haves (and you should), then percentage-wise this doesnâ€™t add quite so much as the others. Still, if you are enthusiastic about the system, gaining Captain Cosmic and fighting against Progeny will be some of the most fun you can have.

Vengeance
This title differs somewhat from the other expansions. Rather than include four villains, it includes only one â€¦ sort of. You see, the bad guy is actually part of a villain team where each has their own deck of cards. Every player chooses and operates one deck and the five villains work together â€“ both helping each other and, more often â€“ combining to hurt the players. It can add a little fiddliness to a game that already has some, but provides an excellent experience. Plus, five amazing heroes like Setback and Parse.

One-off heroes/villains/environments
There are numerous single expansion heroes, villains, and environments for Sentinels. All are worthy additions to the game, though none are critical to enjoying the experience. As time goes by and you want to pop another hero or villain into the rotation, these are great. But I wouldnâ€™t start here. Villains like Ambuscade and Chokepoint can provide unique challenges. And heroes like the Scholar and Unity introduce whole new game elements.

Villains of the Multiverse
Building on the Vengeance model, this title has no stand-alone villains and no heroes at all. Instead, it provides ten mini-villains that can be used in any combination (including with Vengeance villains) to create new teams to fight against. There are some amazing experiences here, but this is a definite change from the usual system. And itâ€™s best for players with a lot of experience who are looking for a new feel.

Larger Villain Cards
One annoyance can be that the villain information is on a teeny, tiny card. Well, this pack of oversized cards gives the villain an oversized presence on the table. Better yet, there is enough room for big font so you arenâ€™t squinting from across the table.

Foil Hero Cards
Over the years, Sentinels has seen numerous variant heroes show up such as Redeemer Fanatic, Horus of Two Horizons, and Scholar of the Infinite. Even whole new teams like Darkwatch and Freedom Six show up. And if youâ€™ve missed those promotional items, this is a great way to add all of the content to your game. Plus, shiny foil cards for the heroes!