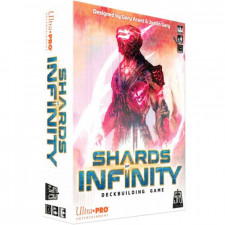 At first blush, Shards of Infinity hardly sets itself apart from its obvious roots. You need gems to buy cards and power to attack your opponents. There are four different factions, each with cards that have similar effects and some that trigger off one another. There are Champions, which stay out from round to round, and Allies, which get shuffled back into your deck. Thereâ€™s nothing in this familiar formula that is going to dazzle you, but this is just the opening act. Shards of Infinityâ€™s real headliner is the mastery mechanic. Cue the lights. 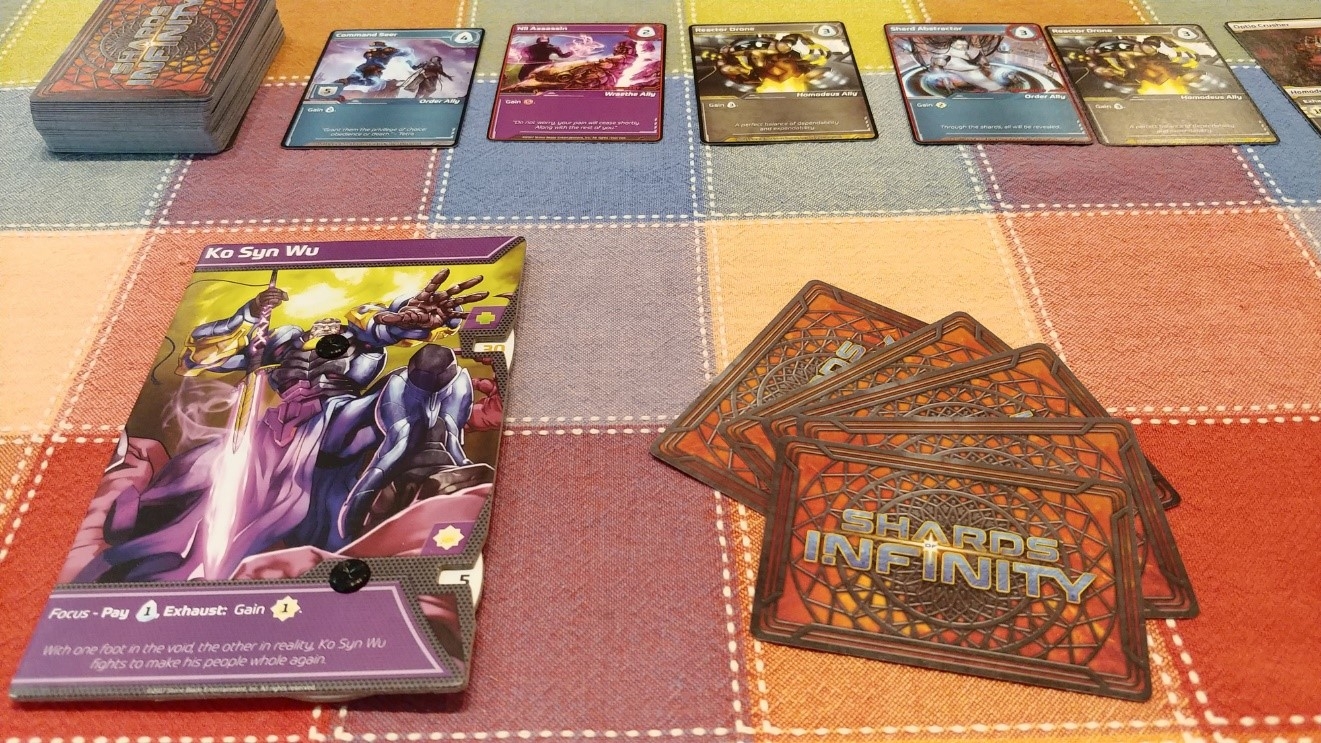 Each oversized character card has two dials: one to track health and a second to track mastery. Certain cards have mastery values on them, which you can think of as thresholds. If you meet or exceed the value, you gain additional or alternative effects. In other words, your cards become more powerful over time. For example, in the starter deck, there is an Infinity Shard. By default, you get 2 power each turn to distribute to opponents however you want. You can get 3 power instead if youâ€™re at 10 mastery and 5 power at 20. Not impressed yet? Well, how about infinite power at 30? Yes, infinite power. As the great poet, Kesha once said: this place about to blow.

From the start, Shards of Infinity sets a time bomb in your hand and waits for you to light it. There is constant pressure to adapt and react. The strategy of â€œbuy cards to get more attackâ€ is not going to cut it when your opponents are regaining health, shielding your attacks, and building up a nuclear arsenal in their spare time. However, focusing on only building mastery may not work if you get punched 50 too many times in the face before your Infinity Shard goes off. This means thereâ€™s a lot of room for zigging when someone zags, zagging when someone zigs, and deciding which one is better when thereâ€™s a roided out Wall-E knocking at your door each turn.

If Shards of Infinity ended there, Iâ€™d be happy, but thereâ€™s one more thing that makes the game stand out. Some Ally cards are mercenaries. You can always buy them and add them to your deck like any other cards or you can fast-play them. Once per turn, you pay the cost to put a mercenary into play. They act like any other card in your hand, triggering effects according to your mastery level as well as any faction bonuses. After your turn, they are returned to the bottom of the deck with not even so much as a â€œhave a great summer, keep in touchâ€ yearbook signature. Initially, it seems like a waste to pay for a card for a one-time use until you realize that Shardwood Guardian is going to grant you 6 health if you can play just one more Undergrowth Ally. Fast-play a Leâ€™shai Knight to gain an additional 6 power on top of the base 3 power and watch your opponentsâ€™ faces go ashen. These kinds of crazy combos should come as no surprise given that Shards of Infinity is designed by the same guys who did Ascension.

As someone who has played a lot of Ascension and rarely plays it with more than two, I first eschewed Shards of Infinity as a 3- or 4-player game. It seemed like the game would engender ganging up on others, letting them wallow on the sidelines as everyone else played. I also feared the potential for kingmaking because you arbitrarily chose to attack one opponent over another. Shockingly, none of this was the case. Once you get over asking everyone what their health is, you realize thereâ€™s strategizing to do. If I attack the player to my right and he reveals an 8-valued shield, the other two guys to my left wonâ€™t bother him for a whole round. Do I really want to poke him and find that information out for everyone? When distributing your attack across opponents, deciding who gets what depends on multiple things, such as how annoying their Champions are being, how low their health is, and how much payback they deserve for the turn before. Though things can take a little bit longer with more players, mastery ensures the game wonâ€™t go on forever.

I havenâ€™t been this excited about a new deckbuilding game in a long while. Everything in Shards of Infinity â€“ from the pacing of the game to the card abilities to the player interactions â€“ has impressed me. I could complain about the fiddly health/mastery dials or the character cards all being symmetrical, but they are minor grievances. Right now, the only thing I can lament about is waiting for more expansions. Iâ€™m sure theyâ€™re coming and Iâ€™m ready to get in line.