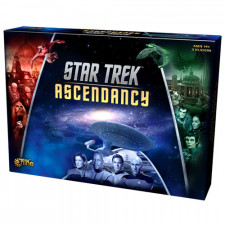 MB: The Pet Shop Boysâ€™ Neil Tennant once referred to a certain period of the British synthpop bandâ€™s output as their â€œImperial Phaseâ€, a time during which it was almost universally acknowledged that they were at the peak of their power creatively, commercially, and popularly. With Star Trek: Ascendancy, Gale Force 9 has, as far as I am concerned, entered their Imperial Phase.

DT: It feels wrong to call it â€œimperial,â€ as that might unintentionally invoke an unrelated Star War. Iâ€™d be more comfortable with a â€œTholian Assembly Phase.â€

CT: My eyes popped and my brain went supernova only a single turn into my first play. Without a doubt this is the best game GF9 have produced, surpassing even Spartacus in achievement. Eclipse is one of my favorite designs this side of Sol, and this is neck and neck. I may spend the rest of my life debating it but I will tell you right now, if I had to pick one to play itâ€™d be Ascendancy. This game is just smooth and eloquent. Itâ€™s breezy yet deep and it wants you to keep playing again and again. Itâ€™s a big box game but itâ€™s accessible and relatively straightforward. I canâ€™t get enough of it.

Warning: image may cause eyes to pop out. Some viewers may also experience cerebral supernova.

MB: I wonâ€™t hold back with it either, I think this game is a breathtaking piece of design work and it is the best game I have played in 2016. Theyâ€™ve done great work in the past with less high profile licensed IP, delivering game after game that excelled in expressing specific settings and embedded themes with rock-solid mechanics and gameplay concepts. But this is â€œThe Oneâ€, I think, where they hit all the right notes. What Sean Sweigert and the GF9 team have produced is a very modern, very innovative space 4x game that plays more smoothly and more efficiently than any other game in the genre to date â€“ and it also happens to be the best Star Trek game in any medium ever made.

DT: Oh great, by noticing that Starfleet Command is secretly riddled with neural parasites, I get to be THAT guy. You know, the one who points out the gameâ€™s downsides so our readers donâ€™t see three breathless critics clamoring to agree with each other, go out and buy the game, then realize itâ€™s for three players only, runs super long, and suffers from agonizing stretches between turns.

MB: So Charlie, are we are going to make Dan play the â€œunreformedâ€ bad guy Klingons for this review?

CT: Some people are just born for a particular role.

DT: Heghluâ€™meH QaQ jaivam! Contrast all that downtime with some of Gale Force Nineâ€™s other titles, like the aforementioned Spartacus: A Game of Blood and Treachery, where youâ€™re always involved because of the constant back-and-forth backstabbing or the gambling aspect, or the blazing fast turns of Sons of Anarchy: Men of Mayhem, and youâ€™ve got a game that isnâ€™t going to appeal to everybody.

MB: Well, you have launched a couple of overloaded disruptors across the port bow with that one, because you have laid out the only two objections I can think of â€” the hard three player limit (at least until expansions come and add seats) and the design decision to ignore a couple of decadesâ€™ worth of turn-threading and staging in favor of a strict IGOUGO format.

I have to admit those are tough points to argue against, but you donâ€™t refuse to drive a Lamborghini because you only have two seats. You ask the third wheel to take Uber. This game is worth the extra time, and it is worth telling three other people to go play something else.

CT: I completely agree with those caveats and they are necessary to mention. The game is a tad longer than Iâ€™d like it to be and I really wish that turns were threaded together as they are in Eclipse. Breaking the game down into micro actions would have kept downtime more in check and the pace more fluid. The fact that it can surmount these flaws is the real story.

DT: Like Kirk busting out of Rura Penthe, it certainly does surmount them, and Iâ€™m relieved theyâ€™re out of the way if only so I can speak freely about why Ascendancy is the game that cracks the warp barrier- and hopefully without Tom Paris and Captain Janeway transforming into randy salamanders.

MB: I think we are losing Charlie here, Dan.

CT: Casual fan here, folks, casual fan. Well, if I had to choose one element that defines this game, the one mechanism you need to come to the table for, it would have to exploration. The trio of random planet, random event, and free-form placement is genius. This combination is stronger than any similar design and really forms a strong identity for the player to grab a hold of early in play.

MB: That is really the fulcrum here. Like you said, there is this sort of three-pronged approach to exploration where you get a sense of discovery that is more palpable than in most other games of this type. You not only discover a new resource-generating location, you also discover a culture that may or may not be resistant to hegemony. You might have an adventure. You could run into an anomaly or get embroiled in a diplomatic imbroglio. Or you might just find a good spot to drop a couple of colony structures. I also like that proximity is procedurally generated in the design, I think that is brilliant how you adjust the map based on the space-lanes, and of course the Warp drive mechanic that lets you accelerate travel between these planets is just absolutely genius.

DT: For me, as a longtime lover of Star Trek, one of the things that appeals to me the most is how Ascendancy truly captures the feel of the â€œbest threeâ€ series. The early stages are all about the danger and adventure of exploration Ã  la the Original Series, with entire fleets getting gobbled up by space amoebas or stellar nurseries. Colonization is a testy prospect, ships are sort of slow, you have no idea how the map will shape up. And since the map itself is organic and ever-changing, filled with surprises and deadly corridors and various avenues of approach into hostile territory, each match presents something entirely different. Then you make first contact and the game changes. Now itâ€™s border tensions and stolen research projects and diplomatic wheedling, straight out of The Next Generation, and eventually the escalating alliances and warfare of Deep Space Nine. Remember how the Federation finally got the Klingons and Romulans to put aside their differences to beat the Dominion, so the Dominion teamed up with the Breen to sack Earth, and so on? Thatâ€™s how the latter third of the game feels, with everyone trying to wreck whichever team is about to dominate the Alpha Quadrant.

MB: And this, readers, is why I asked Dan to the Ponn Farr dance. Thatâ€™s a brilliant way of analyzing how this game uses the Star Trek setting. Mr. Sweigart and the GF9 team have their finger on the pulse of Star Trek fans here. Iâ€™ve always said that in their games, itâ€™s like the designers started out with a blank sheet of paper and made a bullet list titled â€œWhat do I want to do in a

CT: Whatâ€™s particularly interesting, is that while each of the factions may feel strongly tethered to the source material, itâ€™s never suffocating. Iâ€™m clearly the least knowledgeable about Trek in this group and that doesnâ€™t detract from my enjoyment at all. Since the scope of the game is so macro and detached from the minutiae of specific characters and series moments, itâ€™s easy to jump into even if you refer to the Klingons as â€œthe forehead dudesâ€ or Romulans as â€œspace elvesâ€. It manages to stay true to its IP while still being extremely playable and fun.

MB: I have consistently argued that one of GF9â€™s greatest strengths is that their design team understands the difference between themes and settings. Kirk, Spock and the Enterprise are not part of the theme. They are part of the setting. The themes are the kinds of things we discussed above â€” things like exploration, discovery, and diplomacy and conflict resolution. Themes are universal, even when the subject matter or setting is not. 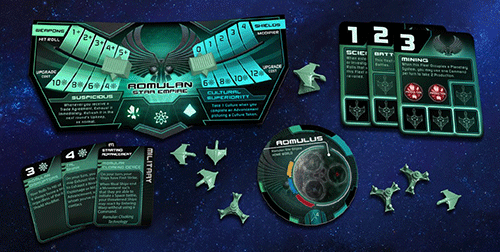 Whoops- the cloaking device failed. This should have appeared as a blank space.

DT: Designing a Star Trek game has always struck me as a bit of a Kobayashi Maru, in part because Star Trek is so broad in terms of both its themes and settings. Most of the time, you get these little snapshots: space combat, exploring a particular sector, fighting the Borg, stuff like that. Here, though, youâ€™ve got the entire fifty-year history of Star Trek to draw from, and theyâ€™ve done a fantastic job of compressing it all into one coherent package. On its own that would be impressive; that the game works so well on its own is simply incredible.

MB: And here in the 50th anniversary year, this is one of the greatest ways to celebrate Star Trek. It really does give you the full experience, and I think that even someone with zero experience with Trek or even a casual fan who doesnâ€™t know Darmok from Jalad can get a sense of the thematic scope and far-reaching range of stories the setting offers.

DT: Agreed on all counts. Itâ€™s a real Jemâ€™Hadar in the rough. The 286th Rule of Acquisition states that everyone must at least take a look at this game.

CT: I have no idea what these guys are talking about but I do know this game is fantastic. It sounds like there is a [insert Star Trek unit of measurement here] of content on the horizon and Iâ€™m in for all of it. Cardassians, Bothans, Ferengi. Bring it on.