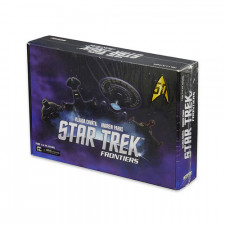 Itâ€™s nearly impossible to describe Star Trek: Frontiers without referring to Mage Knight because, well, Star Trek: Frontiers is basically Mage Knight, both for better and for worse. Itâ€™s the equivalent of having a room in your house that was once painted with green ivy and a cheerful sun in the corner, but now your young son is moving in so it gets repainted blue with glow-in-the-dark stars puttied to the ceiling. It might look totally different with space shuttle models drying on the desk and a poster of Neil deGrasse Tyson on the wall, but itâ€™s functionally the same room. 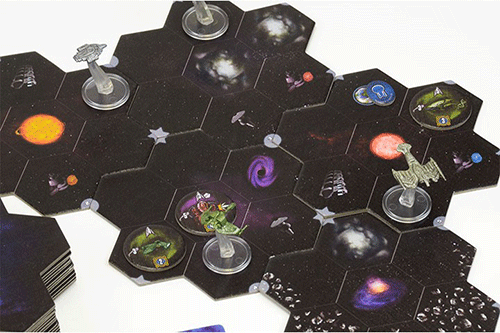 This isnâ€™t to say there havenâ€™t been changes from Mage Knightâ€™s formula. Itâ€™s easier to get around, perhaps because outer space is big and open, whereas Mage Knightâ€™s fantasy landscape was dotted with villages and haunted woods and mountains and hills. Thereâ€™s no day/night cycle to endure, because, once again, outer space. Perhaps best of all, many interactions can be resolved via diplomacy. Certainly one of the central themes of Star Trek itself, that enemies can become friends, that misunderstandings can be righted, shines through every time you send an away team down to a planet to investigate a distress call, get ambushed, then talk your way out of danger. As a blabberer myself, thereâ€™s nothing quite like the gift of gab saving your bacon.

Then again, perhaps Iâ€™m getting ahead of myself. Perhaps youâ€™ve never even heard of Mage Knight. In that case, let me clue you in.

Mage Knight was a game about fantasy superheroes. Not entirely true, though thatâ€™s the easiest way to put it. There were bad things going on, so you showed up and set them right, growing absurdly powerful in the process. It was also a deck-building game of sorts, with new moves and abilities and artifacts gradually beefing up your hero, and each turn revolved around using whichever combination of moves youâ€™d drawn from your deck. At the outset, a few puny orcs posed a real problem; by the end of the game, you could melt castle walls and send entire armies to die for your possibly-unethical goals.

It was good stuff, though it had a tendency to plod, and the designers banked on the goodwill of clever gamers to power through the gameâ€™s cluttered manuals and myriad options. As a solo game or with just two, it was incredible. With four, I once actually fell asleep in between turns.

Star Trek: Frontiers is that, almost exactly, but in the Star Trek universe. And for some â€” myself included! â€” that will be enough to make it more interesting than the original Mage Knight. Rather than marching around as a generic-feeling fantasy hero, here youâ€™re helming the Enterprise or totally busting it as the Duras Sisters. Villages and keeps and dungeons have been repainted as class-M planets and Dominion starbases and distress calls from remote backwaters. In many ways, the mechanics feel appropriate to the new setting even moreso than they did for the original. Take the deliberate pacing, for instance. Spending a few minutes wrestling with a tough hand only to finally figure out a way to bypass a nebula, beam an away team down onto a planet, get saved by Data or Geordi La Forge, watch as a couple crew members are injured but ultimately save the day anyway, is such a Star Trek thing to do that it practically demands you start bragging about your own personal Kobayashi Maru. Mage Knight presented every move as a puzzle to be worked through, and it wasnâ€™t uncommon to discover a better outcome even after youâ€™d made your move. Presenting a Star Trek game as a problem to overcome feels right. It even allows all sorts of takebacks in the rules; better to work through the problem on the board than purely in your head. If that bruises anybodyâ€™s if-you-touched-it-you-move-it chess sensibilities, just pretend your crew is running training drills in the holodeck prior to carrying out their actions. 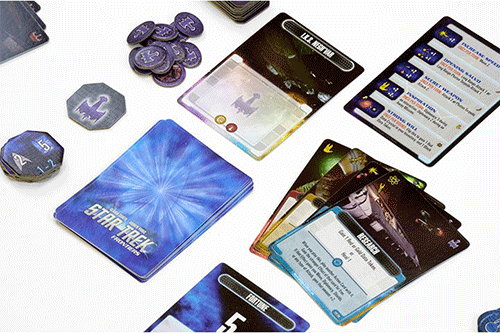 The problem is, many of Mage Knightâ€™s worst problems have been as faithfully transcribed as its best features. Did there really have to be two rulebooks, both as poorly laid out as possible? Did the reference cards really have to be, in fact, twenty reference cards, each reminding you about one little rule? Is it absolutely necessary that the setup feel this obtuse, or the leveling system, or the abysmal (and all too often pre-faded) card and token layout, or the lack of a single concise place that lays out what all those icons mean? I can speak a few choice phrases in Klingon, but I shouldnâ€™t have to learn a second fictional languageâ€™s idiosyncrasies just to play a game. They tried that in one of the earliest episodes in Deep Space Nine. Incidentally, it was one of the dorkiest episodes of that series.

As I said, Star Trek: Frontiers is a tricky one. A part of me loves it even more than I loved Mage Knight. Just the other day, I managed to beat General Martok in the race to scan a critical sector, then used Picardâ€™s philosophical bafflegab to solve a planetâ€™s existential crisis faster than you can say â€œDarmok and Jalad at Tanagra.â€ At the time, I was elated at my cleverness. But the mere thought of putting that beast back on the table is about as energizing as the thought of leaving Risa to get back to my job standing around in the transporter room. After all, I may be exploring the unknown frontier, but when my job mostly consists of staring at a pattern buffer, a pleasure planet starts to sound nice this time of stardate.