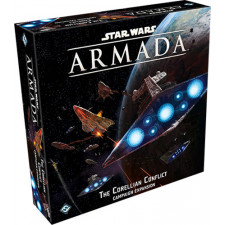 Fantasy Flight Games went all-in on the Star Wars galaxy, and their array of titles have needed different cooking times before being ready to serve to perfection. Star Wars: Armada has been baking for almost two years now, and the Corellian Conflict expansion is how it should be savored. Full of theme and the slight rules tweaks the original game needed, plus a bit of a curveball to start things off, the Corellian Conflict is how Armada was meant to be experienced.

First, the curve: out of the box, this expansion is a legacy game. In what is probably the biggest Rochambeau delivered to Star Wars fans since midichlorians, the campaign is tracked by placing stickers on a fold-out map. Rebel base destroyed? Place a â€œdestroyedâ€ sticker over the Rebel icon and move on. It creates a history, or a portable solution to avoid tear-down, as the rules-writers state. Or a lower production cost. In any event, legacy trauma is nothing new to the gaming community, and while this particular title doesnâ€™t really need or benefit by it, there are as many ways to work around it as there are superfluous tokens in the storage containers of any serious Armada player (hint hint). Or be like me and use PowerPoint. Donâ€™t get hung up here, or youâ€™ll miss out on a spectacular game experience. 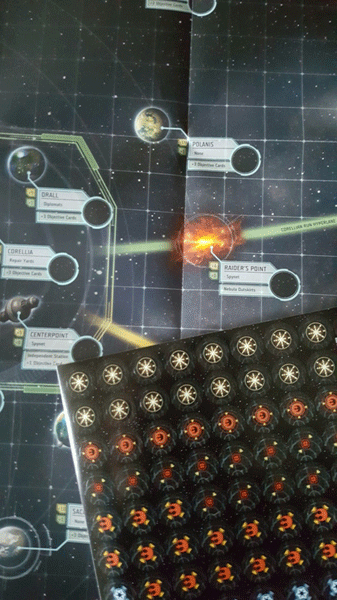 The battle for the Corellian sectorâ€™s awesomeness is twofold: fleet persistence and objective realignment. Four to six players face off in two teams, representing the Rebellion or the Empire, and each player creates their own unique fleet. With a starting limit of 400 points, teammates choose ships, squadrons and upgrades with some latitude; the squadron point limit is still adhered to, each ship can have only one upgrade (not counting your commander) and each faction can only have one of each unique card represented. Despite what director Abrams would have us believe, heroes canâ€™t zip across the galaxy in seconds to take part in every battle, and there can only be one of each titled ship flying around the sector at a time. Budding admirals should choose these uniques carefully and guard them well, because the game has limited mercy on them.

Every distinctive ship or squadron destroyed must either be repaired during the campaign turnâ€™s bookkeeping phase by spending points acquired via battle or bases, lest it start the next battle â€œscarredâ€. Lose it again, and itâ€™s gone. Darth Vaderâ€™s dead, never to return. Tantive IV is space dust. Tensionâ€™s created, stories are made, and Armada creeps toward the magic captured by Star Wars: Rebellion.

So whatâ€™s the alternative? You have to go all-out to win, right? That depends on your objective, and thanks to a long-overdue tweak to that mechanic, the Corellian Conflict gives a myriad of strategic options to fleet commanders.

Each turn of the campaign, the sides alternate declaring assaults, choosing a location on the map to send a fleet, with the other faction responding by declaring a defender. And finally, the attacker chooses among the available objectives, regardless of the opposing fleetsâ€™ point values. Some of them are the defenderâ€™s fleet objectives, but certain locations have set objectives, and if a base is being attacked, it has three objectives of its own. The rules weirdness of the base game, designed to level the spatial playing field for hardcore fighters, has been shifted back to where it belongs: the attacker chooses. No longer do invaders hyperspace in, then hope the defender has an objective they like. â€œWe flew in here to destroy your space station.â€ â€œOur ships dropped out of hyperspace to disrupt your supply line.â€ â€œA key generalâ€™s passing through this nebula and weâ€™re here to capture him.â€ All of these are real goals and the attacker knows this going in. Theme and purpose. Narrative creation. 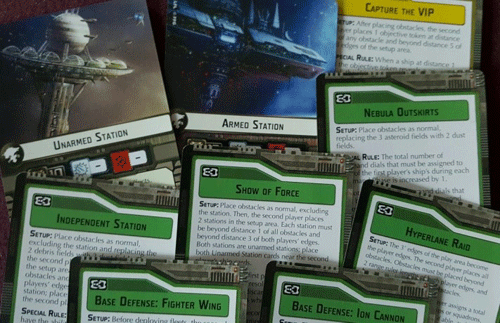 Everything has transpired according to their designâ€¦

The second tweak helping this saga is hyperspace. In certain game turns, commanders can declare a shipâ€™s hyperspacing out after its activation, granting the enemy victory points but keeping your Star Destroyer from getting scarred, or your scarred commander from dying. More strategy and theme, especially combined with the new objectives. â€œWe drove the Imperials back, but not before they got supplies from Farvano Station to refit their fleet,â€ is a real thing. â€œThanks to blasts from the ion cannon, we stopped the Rebel invasion,â€ is, too.

New objectives arenâ€™t the only cards included. Each of the squadrons in the original Rebel and Imperial packs get a special, like Rogue Squadron or Black Squadron, and a new ace. Combined with the new squadron packs, these uniques restore much-needed usefulness to Armadaâ€™s smallest family members and provide a real alternative to big-iron fleets. Dust fields join debris and asteroids to provide new obstacle challenges and stations now fire back if you want them to. Star Wars: Armada finally feels like a fully-realized galaxy.

Sure, the legacy aspect goes over as well as Greedo shooting first, but if you fast-forward through it while chanting and rocking like Chirrut, the rest of the Corellian Conflict is amazing. Itâ€™s the only way to play Armada, and a perfect way to bring the epic scope of Star Wars to the tabletop.