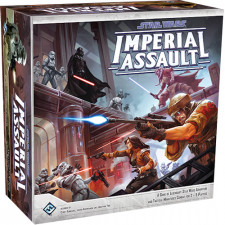 Fantasy Flight Games dropped Fat Boy and Little Man on the unsuspecting masses at last yearâ€™s Gen Con with the announcement of Imperial Assault. Men and women of poor hygienic standards were wandering down the small alleyways between retailer booths mumbling something about Star Wars Descent with watery eyes lit up like a tree in December. Large crowds had their cell phones out snapping pictures of that gorgeous AT-ST miniature like a flock of paparazzi swallowing a young starlet. It was something to behold and there was a sense of fever in the air.

Imperial Assault is the fourth generation of the original Kevin Wilson-originated Doom system that FFG released over ten years ago. That multi-colored dice pool-fueled dungeon crawl framework would be re-implemented in Descent first edition, evolve into Descent second and finally settle into the latest Star Wars branded edition. A team of players each control a newly minted hero outside of the established Star Wars fiction that cleanly slots into an archetype quite derivative of the source material. You have options such as a strong Wookie, a woman that has stolen Han Solo's style and a force adept Twi'Lek who is useful for more than just a floorshow and Rancor feed. The Imperial forces are controlled by a game master of sorts who plays head to head against the Rebel scum.

Beyond clawing immediately into our frail hearts with nicely sculpted plastic miniatures and an vaguely â€œOTâ€ (thatâ€™s original trilogy) veneer the game certainly manages to produce a sense of ecstatic pew-pew joy as players cut through walls of Stormtroopers and even go head-to-head with Darth Vader on occasion. The simple dice system that generates attack outcomes as well as providing for some creative use of abilities via the surge mechanic is easily grasped and quickly manipulated for tactical variance. It is tried and true dungeon crawling fun backed up by one of our favorite intellectual properties and the enjoyment comes quick and easy.

Once you get past that initial gushing phase and look beyond the slick plasteel faÃ§ade a few flaws persist in such a way that you begin to wonder if George Lucas himself may have slipped his hand into the design. The first issue is that much of the structure of gameplay and the subsequent design of scenarios does not produce a feel that is evocative of the source material. X-Wing feels like Star Wars as we can easily imagine Wedge Antilles juking in his spacecraft but Imperial Assault comes across squarely as a dungeon crawl with lasers. Rarely does the ensuing narrative or of story really produce a Star Wars-y fabric or a new, unexplored slice of that universe we've come to love. You don't feel like you're re-enacting a key moment from one of the films, rather you're participating in an abstract representation which is hampered by its tools and cast.

The second cause of frustration is that most of the campaign scenarios feature a time pressure element that forces the Rebel players into action. From a game design standpoint this is solid as it keeps the game moving and from drawing to a stalemate. This keeps play at a rapid pace and affords a sense of dynamic intensity. The issue is that running past packs of enemies so that you can smash a terminal while a Stormtrooper repeatedly blasts you at point blank range is not a scene from any of the movies that I can recall. It can be narratively jarring as you try to ignore the absurdity of an E-Web cutting into your backside while you try desperately to press a button just so you can accomplish your objective and the Imperial player can read that bit of story text to close out the mission. This is certainly a huge double-edged sword with a crooked, rusty blade so you better keep up to date on your tetanus shots.

Despite the fact this isn't a perfect game there is a whole lot here to latch onto and enjoy. The campaign system is stellar and is the core feature of this game in my eyes. It hits all major features while still remaining elegant which is something none of its peers are able to accomplish. Players earn experience which they can use to purchase one of several custom upgrades associated with their character while the Imperial player earns both experience and Influence. He or she can utilize upgrades and has many options which incentivize replayability and trying out new overarching upgrade paths. It's interesting and varied for both sides as the design does a great job in allowing for options and customization to place your personal imprint without overwhelming.

The most interesting feature of the campaign is the mission system. Players begin a campaign with a set story mission which will branch off into other story missions depending on the outcome and who achieves victory. This forms a widening branch of narrative that leads to a final mission that determines who the actual victor is. Adding texture and weight to the campaign is the introduction of side missions. At regular intervals two random side missions are drawn from a deck and players choose which to tackle. The side mission deck itself is built from a combination of scenarios based on each participating hero as well as random cards from a pool that will be ever widening with expansions. The Imperial player can even add more difficult scenarios to the deck through purchases with his own resources and the players must embark on these side missions or the Imperial player is awarded further boons.

The idea of shaping an array of randomly appearing missions based on the inclusion of specific heroes in the campaign is the single best mechanic in Imperial Assault. It allows for immense personalized narrative as the force adept may get the chance to pursue crafting her Lightsaber or a beleaguered Rebel soldier may finally get the revenge he's been seeking. As hero options and thus side mission variety will come with expansions, there will be a great deal of content to explore. It's interesting and evocative and provokes a sense of eagerness for experiencing what's to come.

Beyond the campaign there is an included additional skirmish mode of play that features two participants going head to head. In a general sense this is the land based answer to X-Wing and will be fully supported on the tournament scene. It trades a bit of narrative punch for more enjoyable direct tactical gameplay and does manage to get away from that aggravating time pressure element arbitrarily placed on the Rebels. The skirmish mode is not simply tacked on to the game and is a worthwhile endeavor for fans of the system despite the fact that it lacks a certain punch to put it over the top.

Imperial Assault is not quite everything we hoped it would be but it is a damn enjoyable game. It's a solid release that will be well supported with a tsunami of expansion material and likely is not even close to reaching its peak in terms of the strength of its content. The best is certainly yet to come and you will want to be standing there clutching your blaster and bracing for impact as the waves of reinforcements crash through the atmosphere.