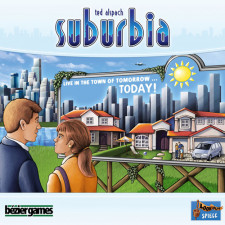 The Sydney Harbor Bridge, The Eiffel Tower, and the Golden Gate Bridge should not be considered beautiful. They are purely mechanical structures embellished with nothing but some lights or a coat of red paint. And yet somehow these structures made of girders, rivets, and cables come together in a way that reveals a beauty that far exceeds the sum of their parts. Suburbiaâ€™s collection of cardboard hexes and familiar mechanics similarly provide an experience far more compelling than what may initially be expected.

Suburbia does not have the dramatic themes, story, miniatures, or chrome that many of my favorite games have. The graphic is a minimalist design in a 1950â€™s Americana style and the components favor function over flair. There is nothing fancy about the hexes, triangles, and circles that make up the playing pieces and most of the gameplay mechanics will feel familiar to an experienced board gamer. Thereâ€™s tile laying front and center, engine building, hidden goals, and victory is determined in the most standard way possible: victory points.

The first unique or novel mechanic is the way that hexes trigger off of each other. Each hex provides your suburb with population, income, or reputation and they often provide additional bonuses based on the other hexes in yours, or your opponentâ€™s, growing town. As they flip out of the neat stacks and onto the real estate market, a way to ensure that hexes get cheaper the longer they sit on the board, they dictate your strategy and the tempo of the game because of the way you need to evaluate their place in the sprawling metropolis. Still, if this was all there was to Suburbia there would be nothing special about it. What makes Suburbia special is the way that these basic mechanical parts fit together like clockwork, or steel girders.

When Suburbia clicks, all these mechanics fade into the background as you plan and construct your suburb. You feel an acute tension as you identify at a glance what the newest hex does, evaluate its effect on the board, and hold your breath as your opponent makes their purchase. Did they buy an airport? Excellent, as youâ€™ll gain income because you also have an airport. Thereâ€™s a simple joy in looking down and seeing your individual hexes working together to serve a larger purpose. As your turn arrives and you can build the football stadium your citizens will love, as well as putting you in the lead for one of the bonuses, youâ€™ll be able to look down and marvel at the little world youâ€™ve created. One of the greatest thing about Suburbia is checking out each otherâ€™s boards at the end of the game. Typically, the player who wins has built a Suburb youâ€™d actually want to live in and the person who loses will have built a patchwork wasteland of industry or a sagging mass of empty developments.

Many of the games on the market are highly thematic experiences with nitpicky rules designed to simulate cosmic war or fantastic battles between men and dragons. Suburbia doesnâ€™t need all those rules and yet I find that Suburbia is one of the few games where the theme and mechanics truly work together and inform each other. It is incredibly logical that landfills need to be placed on the far side of lakes, away from civilization and it also follows that you better make sure you have enough industry and businesses to support your growth into the later phases. A rapid influx of population without the finances to support the growth will cause you to stall out in the later phases and eventually cause those same residents to move out as fast as they moved in. Suburbia is a game that just makes sense and thus becomes incredibly accessible.

On the other hand, while itâ€™s easy to pick up the mechanics, an experienced player will almost certainly beat a new person who can get frustrated by a floundering city. Each game only features a subset of the total tile pool and so you will often splurge on an early tile only to find that the late-game tiles you were hoping would provide synergy are sitting peacefully in the box. Additionally, though the tile makeup will change, the basic flow of the game will be similar each time and some games can feel more like a communal optimization puzzle than the natural and intuitive growth that the best games provide. However, these are nothing more than rough edges on an otherwise excellent game.

Suburbiaâ€™s various pieces fit together incredibly smoothly. From the simple starting board to the multi-zoned city that is built by the end, the game provides a tight gameplay experience in one tense and decision filled hour. Suburbia is a modern classic, a game that can hold up to 100s of plays and deserves a place on almost every gamerâ€™s shelf.