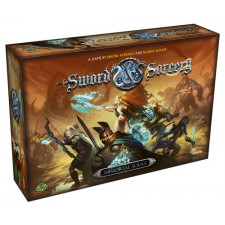 Is there an essential part of us that transcends physical processes? What becomes of that part when those processes cease? What fate awaits us beyond death's threshold?

Sword & Sorcery: Immortal Souls doesn't concern itself with such weighty questions. Like its spiritual predecessor, Galaxy Defenders, it approaches its subject matter with geeky joy, often more concerned with dropping subtle (and decidedly unsubtle) references to other fantasy properties than conveying a coherent narrative of its own. Mechanically, it's similarly regressive, eschewing the rondels and hand management of recent dungeon crawls like Perdition's Mouth and Gloomhaven in favor of cascades of custom dice. You wouldn't know it from the 50-page rulebook, but this is a game that wants to keep things simple.

The timing is rather unfortunate. In October 2015, when S&S launched on Kickstarter, its concept still had some sheen of newness: a campaign-style fantasy dungeon crawl like Descent Second Edition, with treasures, shops and class-specific skill trees to explore, but fully cooperative, without the need for an antagonistic player. Since then, Descent itself has filled that niche with its Road to Legend app, and in the wake of recent genre-redefining dungeon delves, S&S appears a lot more retro now that it's finally arrived in players' hands.

Fortunately, if you're not looking for modern conveniences like diceless combat and reasonable play lengthâ€”if you want a cooperative fantasy game that's as brash and sloppy as a chest-beating Cimmerianâ€”S&S is the best out there. Yes, that includes Descent. 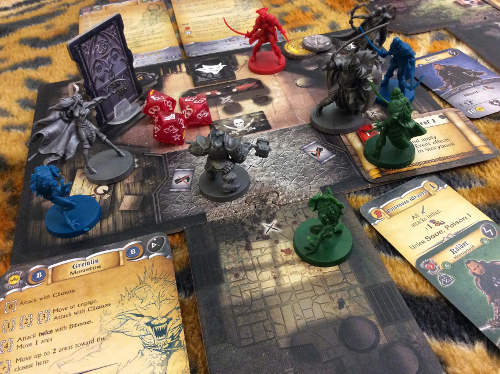 The Components are gorgeous, including alternate sculpts for the enemy figures and piles of custom-shaped tokens.

In Sword & Sorcery, as in Galaxy Defenders before it, everything revolves around the custom dice. As in GD, they're 10-sided and come in two colors, red and blue. Blue dice are used for saving throws, defensive rolls, monster spawning and weaker attacks, while red dice are used for stronger attacks, searches, and other special events. Gremlin Project squeezes those dice for all they're worth, leveraging their six icons to trigger special abilities, traps or random loot based on differing probabilities. Combat isn't cerebral, but it is dynamic thanks to a wide array of dice-triggered effects and statuses.

The dice aren't the only mechanism returning from GD. The two-man Italian design team of Simone Romano and Nunzio Suraceâ€”collectively know as Gremlin Projectâ€”keep the robust enemy AI system they designed for Galaxy Defenders largely intact. Once more, each enemy model comes in three ranks (green, blue and red) with their color tied to increasing stats, skills and behavior. Behavior is based on proximity to the nearest hero, so while enemies don't actually have stats like movement speed or attack range, their AI effectively simulates such things. Using range to dictate their behavior also makes the AI exploitable, and that's not a flaw; in fact, it's the best feature of the system. Each enemy has its own personality, and by learning that personality, players can eke out an advantage.

However, in S&S, it's even more robust. GD had all the enemy behavior and stats on small cards, which were also used to randomly spawn new foes; S&S splits this into enemy cards, which show health, defensive skills and rewards, and larger enemy scrolls, which house all the info on AI, attacks, and special skills. This division of information can be confusing at first, but it ultimately allows for more detailed and less ambiguous enemy abilities, not to mention subtle differences even between enemies of the same rank (two green enemies might have different health and reward stats, for instance). S&S also introduces all four enemy ranksâ€”including red, which act like minibosses, and the purple "Master Enemies," unique foes with mountains of HP and two-sided scrolls to represent different forms or fighting stylesâ€”in the starter set, while Galaxy Defenders required you to purchase expansion content to move beyond green and blue.

The coolest innovation is S&S's "Ghost Soul" system, which replaces player elimination with a Dark Souls-esque second chance. Upon death, a hero returns as a Ghost Soul. They can't use their equipment or normal abilities, but they can use special Ghost Soul activities to affect the battlefield or spend soul gems at a shrine to resurrect in body form. 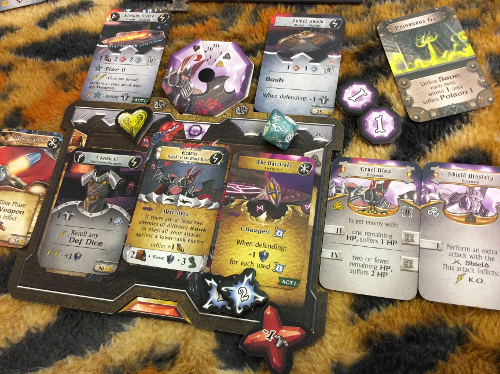 Each hero has a Chaos and a Law side, which affects stats, skills, and story branches.

In fact, there are clues throughout the game that the Gremlins have digested feedback of their earlier efforts. S&S is, in all respects, a cleaner and more sophisticated design. Combat is faster, with more guaranteed hits and equipment-defined caps on defensive dice rolledâ€”many enemies roll no dice to defend at all. Replacing GD's hex-grid map with large, organically shaped spaces removes the source of ambiguity that plagued GD's AI. Replacing the awkward hex-based inventory with more traditional cards to represent skills, equipment and itemsâ€”either looted as treasure or purchased in shopsâ€”makes room for more varied and interesting abilities spread across several thick decks. Other innovations include randomly assigned enemy enhancements, streamlined setup (no more tedious stacking and shuffling of micro-decks), and the ability to perform, at higher levels, multiple attacks or actions per turn.

Yet the Gremlins also seem to have developed a case of logorrhea. What began as mood-setting paragraphs in the Storybook have exploded into an Arabian Nights-style Book of Secrets. In the midst of combat, NPCs launch into Shakespearian monologues; walking over waypoints on the map can trigger chains of atmospheric text, not all of which lead anywhere mechanically. Like GD, Sword & Sorcery is at its worst when it temporarily abandons its robust combat in its attempts to tell a story, and while these interruptions are more frequent this time around, at least you never have to go an entire mission without hitting something.

Sword & Sorcery is neither deep nor groundbreaking. It isn't ushering in a new era for campaign-based fantasy dungeon crawls; quite the opposite, in fact. As its name suggests, Sword & Sorcery is a love letter to the kinds of pulp fantasy games that Gloomhaven is destined to replace. Sword & Sorcery might be the dice-chucking, beer-and-pretzels fantasy genre going out in a blaze of glory.