Editor's note- we here at The Review Corner are obviously very excited that Miniature Market has resumed offering Games Workshop products and we look forward to providing you with top-notch coverage of them through our podcasts, video reviews and of course our written content. Myself and Lead Writer Charlie Theel wanted to offer some thoughts about Games Workshop, one of the longest running and most successful brands in the hobby business, so indulge our wide-eyed fanboyism in this pair of editorials as we celebrate.)

A few months ago, I was digging in my parents' basement looking for some ancient Gundam models that I was going to give my seven year old boy. While sorting through a bin of things I left behind when I moved out in 1999, I came across an old Space Marine that I painted sometime in the late 1980s, one of the original "beaky" armor models from the Rogue Trader days. It actually didn't look half bad, and it had that old style all-green base that everyone used to do on them. I have no idea what happened to the rest of my old Warhammer stuff, things I had when I was in High School. Regardless, Warhammer has always been with me throughout my gaming life. Games Workshop has always been with me, whether it was the miniatures games, board games, video games, or the licensed games that Fantasy Flight did until the companies parted. I bought that Space Marine I found when I was 11 years old. Now, 30 years later, I'm more in love with Games Workshop than ever.

Yes, they blew up the Old World. Get over it. It wasn't selling.

Over the past two years, beginning with the release of Age of Sigmar, Games Workshop has completely done an about-face. If you haven't been paying attention, the company has just been killing it. Every release, practically, has been stellar. They completely turned around the somewhat lackluster release of Age of Sigmar by doubling down and responding to fan concerns through the General's Handbook- and now it is the best miniatures game on the market- even without the beloved Old World setting. The boxed games, beginning with Horus Hersey: Betrayal at Calth and on through Warhammer Quest: Silver Tower and up to the sadly short-printed Shadow War: Armageddon have been simply outstanding. Gorechosen was the best game of 2016 and it is the best board game design the company has published since Space Hulk. The miniatures releases have been superlative as well. The recent Kharadron Overlords, Tzeentch Arcanites, Thousand Sons Rubric Marines, and the Sector Mechanicus terrain have been just incredible. And they brought back Blood Bowl! 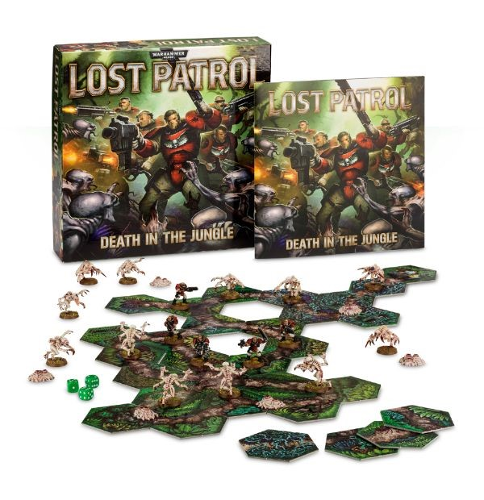 And Lost Patrol! You can't beat that! Seriously, you really can't.

But more importantly, Games Workshop has been working to make their products, which are a premium-class brand, more accessible than ever. Barriers to entry have been lowered- witness Age of Sigmar's four pages of core rules, available for free, or the more board game-oriented offerings that may just tempt folks to try their hand at painting for the first time. GW has listened to complaints; they've followed up on concerns from fans and the player base. They've become more open on social media and more supportive rather than restrictive of the online community. They are a company that has very much gone through what seems to be a reformation period including fundamental changes in the way they do business- allowing Miniature Market to sell their products once again is an obvious example.

And now we are just about a month and some change away from the 8th edition of Warhammer 40k, a game that until X-Wing hit was the top-selling miniatures game in the industry. Much has been revealed, including several indications that prove that Age of Sigmar was in some ways a sort of "beta" version of the new edition of 40k. Forward-thinking players- myself included- have applauded the move toward simpler, more direct and approachable rules. I can't wait to see what they've done to revitalize and rejuvenate their flagship game. If the past two years are any indication of what to expect, it's going to be nothing short of awesome.

Regardless, there will be detractors. The most hardcore will complain and declare that 40k is dead and some earlier edition was the best. There will be the usual crowd that screams about it all being "dumbed down". Or that the new version completely screws one faction or another. Others will express frustration that the starter set has Space Marines in it and not a Xeno faction. And of course there will be the usual chorus of folks who think that GW products are overpriced. 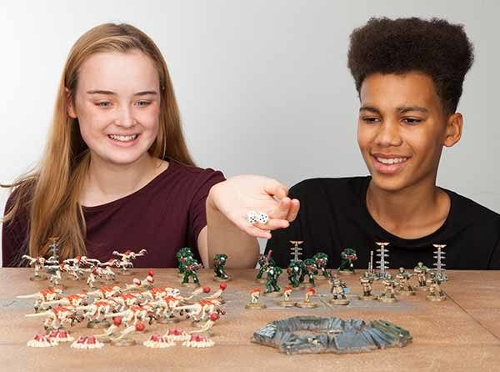 Looks like these youngsters are enjoying some 8th edition 40k. The guy is like "please don't roll the dice into my models" but he doesn't want to say anything.

Here's the deal. Games Workshop puts out a premium product and they have been doing so for going on 40 years. Change is inevitable and of course you can't please all of the people all of the time. The company is making absolutely the right decisions in terms of simplifying its designs in such a way that captures depth and narrative while jettisoning clutter, fat and unnecessary process. So the complainers are sharply undercutting the tremendous progress this company has made in terms of modernizing and updating not only its games but also its business model.

There has never been a better time in the company's history to be into Warhammer or its other product lines whether you are a veteran who has moved on to other games, a lapsed fan of the lore, or someone completely new to it all that doesn't know the difference between an Aspect Warrior and a Dire Avenger. It isn't common for a games publisher to go on for as long as GW has as it is, but for the company to completely renovate itself and make so many right decisions is just amazing to watch. Sure, there have been a couple of speed bumps along the way, such as the unfathomable move to make the incredible Shadow War: Armageddon all but unavailable, but in an era when shoddy and barely playtested Kickstarters are all the rage it's so nice to have a professional company continually cranking out top notch, highly refined and premium products.

When I started getting back into Games Workshop products about a year ago, when Warhammer Quest: Silver Tower released, it felt like coming home again. Now, I'm looking at a game shelf where over half of it is Warhammer or Warhammer-related stuff. I've sold or traded many games to build up this collection, and there's no end in sight. I had been disillusioned with the state of board gaming, but coming back to Games Workshop has totally rejuvenated me as a game player. Their renaissance has also been my renaissance.