About 10 years ago, I wrote an editorial for my column at the dearly departed Gameshark.com called "Whatever Happened to the $50 Game" in which I lamented the end of the era in which a Ulysses S. Grant could net you a big-box board game. My, how times have changed since then. At the rate we're going it won't be long before I'm writing "Whatever Happened to the $100 Game."

A few things have happened since I wrote that piece, which was in itself a response to the rise of really big box games like Twilight Imperium and Starcraft hitting the $80 mark and games at the $50 price point edging up to $60 due to inflation, exchange rates, rising production costs and other factors. In 2008, Games Workshop put out a $100 reprint edition of Space Hulk, which felt both astronomical and like a harbinger of things to come. Kickstarter spooled up, and it became common for consumers to lay down $200, $300 or even $1000 on a single title. Cthulhu Wars, Kingdom Death: Monster, and any number of Cool Mini or Not games advertised prices that, in 2007, I would have described as "utterly %$#$!&@ insane."

It's a foregone conclusion that games are going to continue to get more and more expensive, and there was a time when I, like any sane consumer, railed against the rising cost of having fun. I've found it incredibly difficult - even impossible - to justify the cost of some of today's games. But I have to be honest that I've also come to almost appreciate extremely expensive, luxury-class games in a way that I never thought I would. In fact, almost half of my gaming shelf is now dominated by two of these luxury class games- Cthulhu Wars and Warhammer. And there's a wing for Star Wars: Armada, another game that is definitely in this luxury class - it has a $100 starter set.

I've come to regard titles like these as the Cadillacs of the gaming world, premium titles that yes, I am absolutely willing to spend above the average sticker for because I want that top shelf quality. Not just in terms of components, but also in terms of gameplay, value, and a weird sense of hobby prestige. I'm proud of seeing that almost complete Cthulhu Wars collection, as I am for my wide range of Games Workshop products. With these games, I feel like I am getting not only the best of the best, but also games that I will treasure for years to come. And I especially appreciate that in an era when games require very little investment of time or commitment.

Along with price increases have come a veritable flood of new games, every week. Mountains of them. I've not run the numbers, but ball parking it I believe that somewhere around a million games come out every year now. Of course, quality isn't consistent and the wheat to chaff ratio is definitely veering to the latter. So when I play a game like Cthulhu Wars and it turns out to be one of my favorite games of all time, I absolutely do not mind the premium price. I'd rather put down $50 for a new faction than spend that $50 on whatever the latest "cult of the new" title is for the week. I'm paying more, but I'm getting more as well.

Of course, this swings the other way as well. Many Cadillac-class games turn out to be not worth the money, such as the unfortunate case of Steamforged Games' Dark Souls, which I gave a very generous two star rating to here in the Review Corner. It's a game with a Cadillac price and Toyota Tercel gameplay. Then there are the lemons like Conan, with too much klunk in the engine or that are sold far too "bare bones" at their luxury level price.

So what do I look for in a Cadillac game? I want knockout presentation. Best of the best, no exceptions. I want a rock-solid game with well-written rules that offers modularity and endless replayability. I want an appealing, timeless setting- Star Wars: Armada for example, is never going to get old in terms of its setting. If it's a premium quality reprint of a long-standing favorite game, such as Space Hulk or Necromunda (now known as Shadow War: Armageddon), that's a plus. And I want novelty- the game needs to be something completely singular. I ain't buying a $100+ worker placement or deckbuilding game. 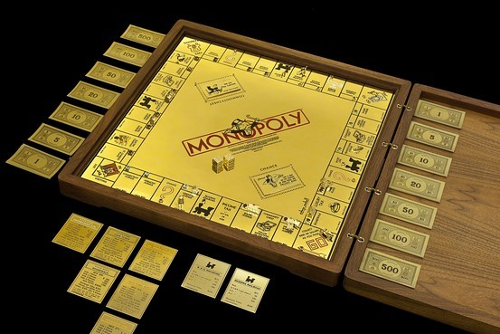 This is a solid gold Monopoly set, at the Museum of Finance on Wall Street. It is worth $3 million. Ironically, it is not what I would call a Cadillac game.

With that said, I'm glad that so far there aren't a whole of these kinds of games worth owning, at least for my part. They tend to take up a lot of space and gaming budget, of course. But whereas I used to balk at the high prices, if I feel like they are justified by what is on offer then I'm much more amenable to agreeing to the asking price. I'm not going to lie- it feels awesome when you break out the Cthulhu Wars set or your complete Star Wars: Armada collection and your friends ooh and ahh, before enjoying the game with you, it's like some ostentatious display of nerd wealth. You won't get that with a $20 card game.