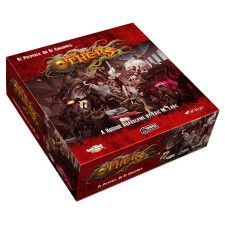 CT: The Others is a one versus many miniatures board game that shattered funding goals on Kickstarter and threw up a ton of dust. It's noteworthy because it's Eric Lang's follow-up release with publisher CoolMiniOrNot after the 2015 smash hit Blood Rage. This is nothing like Blood Rage and probably shouldn't be compared, but the hype and emotional attachment is there; getting out of that massive shadow is going to be difficult.

MB: A better comparison would be the execrable Fireteam Zero, another one of the umpteen â€œyou versus horde of monsters on map tilesâ€ games released this year. CMON in particular has made quite a go of releasing this kind of game with Zombicide: Black Plague being the best and The Others being pretty darn close to the worst. Itâ€™s not a particularly bad design- it works and it pulls off a couple of interesting moves but it is uninspired, uninteresting, and redundant despite its almost comically dated mid-1990s â€œedgyâ€ horror setting. I mean, there is a goth girl with a whip. You can practically hear Marilyn Mansonâ€™s first record while you play this game.

CT: Yes, we've seen this formula before-the antagonist controls demonic/Cthulhu inspired monsters sending wave after wave against powered up heroes. Scenarios dictate objectives and the good guys grab gear to cut their way through flesh and bone rolling custom dice and counting up damage. The production here is gorgeous but I'm not sure the mechanisms arrive with equal gusto. 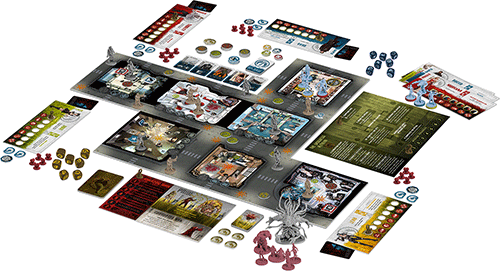 MB: I donâ€™t care about the production; there are a lot of games with incredible production these days. Iâ€™m not impressed by the miniatures, illustrations or anything else about it. They are practically right at industry standard by this point. As for the mechanics, they are about as workmanlike as it gets, which is surprising given that Lang is capable of doing some very influential, innovative work. This is the kind of game where I opened it up and pretty much knew exactly how it was all going to go down. But in contrast to some of the better recent games in this genre- such as the aforementioned Black Plague and the brutally minimalist Deathwatch: Overkill- The Others isnâ€™t complex enough to be compelling and isnâ€™t simple enough to be a balls-out monster bash.

CT: Why donâ€™t you tell us how you really feel?

CT: One odd thing about this design is that there are all these expansions sins with glorious sculpts and beautiful miniatures. The oddball part is that they really donâ€™t function that differently. You basically have a deck of cards that provide some fuel for the Sins playerâ€™s turn, but the actual miniatures and units behave almost exactly the same. Thereâ€™s one special rule for each sin but otherwise an abomination is an abomination. I was shocked how bland this was.

MB: Iâ€™ve only played with the two Sins in the base game, but looking over what is out there it just doesnâ€™t look like thereâ€™s much to add- not enough to buy five expansions for, thatâ€™s for sure. CMON expansions are kind of notorious for not really adding much actual material- just minor variations.

Letâ€™s get into the mechanics a bit. For the most part, this game is pretty much by the books. Anyone interested enough to read this review is going to have a good idea of how it functions if theyâ€™ve ever played HeroQuest, Descent or anything like that. But with that said, there are two really smart design concepts that I hope Lang (or other designers) elevate out of this piffle. One almost salvages the â€œone against everybodyâ€ concept I donâ€™t usually care for by breaking up the â€œSinâ€ playerâ€™s activations into of selective interrupts where the bad guys choose when to activate after one of the good guys have a go. The other is an attempt at creating a branching scenario structure where the players have a fork in the road midway through a mission.

CT: That Sin activation system is really clever and easy to miss. Most of its peers simply let the overlord player react after every hero turn which extends downtime when playing at large player counts.

MB: It also does this neat thing where it creates some palpable tension- you find yourself thinking about what COULD happen if the Sin player takes his activation and planning accordingly. And because the activations are threaded and at the discretion of the Sin player, it creates a more dynamic feel than the usual â€œI go, you goâ€ format of these kinds of games. Doesnâ€™t help with the rest of it, but it is a great idea Iâ€™d like to see in a better game.

CT: The branching objective structure is also fantastic. You can adapt on the fly and determine the path the narrative takes shape. Itâ€™s really interesting and Iâ€™d love to see it lifted by a designer in the future.

MB: They are like good scenes in a bad movie, arenâ€™t they? I like this idea a lot too, this kind of mid-narrative breakpoint where you have a little agency as to what to work for. It creates a little depth there too because both the FAITH players and the Sin player have to consciously prepare for this shift toward specific objectives.

CT: Yes, both of those elements are intelligent design decisions but the largest twist this game offers is the Corruption mechanism. The ability to dictate your own arc and influence your own fate is thematic and satisfying. Give in to the lure and grab special powers for dramatic turns where you take down a huge monstrosity but come to regret your greed later. This would be the perfect mechanic for a 40K temptation of Chaos structure.

MB: It works differently in The Others, but it is conceptually the same as the corruption element in an actual 40k board game, Relic. Special powers, equipment and other goodies might give you corruption that comes back to haunt you later. But you know, this is an idea that goes back also to Kniziaâ€™s Lord of the Rings, where you can choose to risk the adverse effects of corruption to get advantages or â€œHail Maryâ€ do-or-die plays. Iâ€™m not as enthusiastic about this mechanic in The Others mainly because I think those two games in particular have done this before and done it better. I suppose that kind characterizes everything else about this game. Unless you are really into The Crow, Hellboy and maybe Hellraiser and want a game that is clearly influenced by those things, this design is doing absolutely nothing that hasnâ€™t been done better elsewhere- including my favorite mechanic of all time, exploding dice. 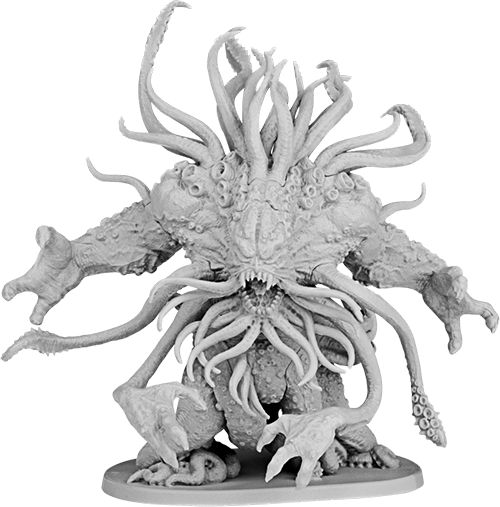 CT: I think youâ€™re being a little hard on the game and this is most indicative in your take on Corruption. What it really nails is that feeling of raw power by giving you every single bonus already passed on the track. The way it escalates is really satisfying and these make up the best moments in the game.

MB: Sure, I get that- and thematically, it works. Thereâ€™s this temptation thing going, and this notion of intoxicating- but spoiling power. You are correct that it gives a sense of escalation and development in a pretty different way than is usual for these kinds of games, but I just canâ€™t get around the setting and the otherwise routine concepts that the good things in this game are saddled with. But yeah, I am hard on this one because I expect more from Mr. Lang than a mostly routine monster-mash at this point.

CT: Maybe we should wrap it up since I can hear your stomach turning.

MB: The bottom line is that there are a few really great ideas here that are quite innovative especially in terms of the â€œone versus everyone elseâ€ format. The problem is that the game just isnâ€™t very good. I suppose that they tried to set it apart from the most recent batch of dungeon plunginâ€™ titles, but when it comes down to it itâ€™s not really that much different than any of the others out there except for the badly dated 1990s Vertigo Comics-ish setting. At least, as a whole, itâ€™s better than Fireteam Zero and if thatâ€™s not damning with faint praise then I donâ€™t know what is.