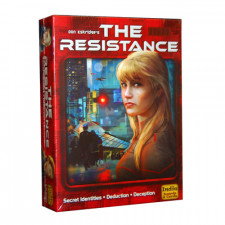 The first time I played Don Eskridge's seminal Resistance design, back when it was in a small box and Indie Boards and Cards was an unknown, the vessels in my brain popped like little kernels set aflame. Social Deduction as a descriptive genre container had not yet been fathomed and it was as if we were all discovering this brave new world full of endless possibilities. It took the social cut-throat stammering of Cosmic Encounter and stripped away all semblance of a physical game, focusing the action on our discussion and endless brow-beating. This is a game that doesn't exactly promote trash talking and wild chicanery but in fact requires it.

The Resistance is a little game with a big hook to the jaw. Players are divided secretly into teams, the majority being agents of a rebellion in a dystopian future. Within this enclave are one or more spies, ready to sabotage the secret missions the group will enact and wreak havoc from the shadows. The experience is about discovering who your allies are and guiding the social weight of the table towards your specific agenda. For the good guys to win you need to fully out the bad, and for the villainy to succeed they need to remain hidden and sabotage by gaining false trust.

The triumph of this release is primarily the establishment of the sub-genre itself, as opposed to any specific features of the design. This type of game births a natural tension and visceral nature bristling with energy and color. The edge of your seat stays warm and everyone is continually engaged with no downtime. Thought processes are devoted to unraveling opponent's decision history, visual cues, and oral responses. The game can become a surprisingly deep yet flawed meta- interaction where playing off the group's conventions is the most important element of success.

Leveraging social manipulation for the majority of the design's depth is a clever aspect yet the mix of legitimate strategy from solvable knowledge is a bit off here. Likely due to the genre's lack of maturity, The Resistance sort of strutted through the gate leaning on that social aspect too hard, as if it was returning from war with a crippled leg and not quite sure how to properly integrate into society. With the only concrete information available consisting of approving/disapproving groups of players nominated into teams as well as success/failure results of those specific teams, the majority of the game can be extrapolated into a bit of a guess relying on possibly unfounded hunches.

In 2015 The Resistance base game doesn't really have a place. The Avalon sequel or the Hostile Intent/Hidden Agenda expansions to this game are where you should be looking. Both add a selection of hidden roles to spice up the context of maneuvering and provide just enough shared information regarding the nature of the table to get the juices flowing and provide strategic oomph. If given the option I would always reach for Avalon or the venerable One Night Ultimate Werewolf over vanilla Resistance as the competition isn't even remotely close.

Later editions of the game recognized this inherent flaw and attempted to patch things up by including a selection of Plot cards. These cards give temporary powers and are distributed piecemeal throughout the game. Their function is fine and probably an improvement on the base experience but they don't integrate as sweetly or consistently as the roles of Avalon; most of the time you will find yourself just leaving them out to avoid the hassle and bloat.

Despite the lack of enthusiasm for this title in the evolved contemporary scene, I believe this game should be looked upon fondly and with starry eyes for its place in establishing social deduction as a genre. Much like the mighty Citizen Kane, this should be appreciated for what it did and what it was as opposed to who it is now. Every once in a while I will still sit down and enjoy an odd game with a group of new players as I vainly attempt to explain why you shouldn't always approve a team and how the system does provide SOME information to its participants.

Most people look upon this game as a party game of sorts to fill out 20 minutes and have a few laughs. With the subsequent release of Avalon and a slew of inspired titles, the genre really opened up and redefined itself as something more. The placing of social interaction and constant engagement on a pedestal remained, but future releases added a level of strategy that just wasn't yet discovered. I will always speak fondly of this titanic release but you'll have to do a bit of work to convince me we wouldn't be better off with one of its peers.