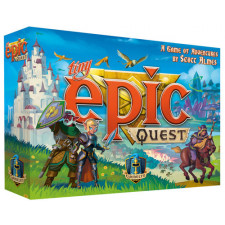 Travel the land! Conjure mana and learn spells! Punch goblins to death! Collect rarities from ancient temples! Receive gifts from the Mushroom Grottos! Traverse Hyru--um, the Mushroom Realm by foot, by horse, by raft, by griffon, or by sea to complete treacherous quests that mostly involve standing around in various formations! Save the realm and be home before dinner!

By this point, the Tiny Epic series from Scott Almes and Gamelyn Games requires no introduction. Itâ€™s encompassed an impressively diverse range of gameplay styles, from micro-4X to base defense, follow-the-leader dice-rolling to Texas Holdâ€™em, but the ideology never changes: squish a big game experience into a small box, footprint, price point and playtime. And itâ€™s been a hit factory, not merely riffing on big dogs like Race for the Galaxy and Runewars but innovating in its own right. Itâ€™s a happy medium between true microgames and meatier fare.

A Tiny Epicâ€™s lineage isnâ€™t usually hard to trace, and Tiny Epic Quest is no exception; it wears its influence on its green-tunicâ€™d sleeve. From the logo to the specific color of gold paint used on the power tokens, Tiny Epic Quest is a feast of nostalgia for Zelda players, with a peppering of Mario 3 references tossed into the pot for good measure. Beneath the video gamey veneer, however, is an equally venerable board game predecessor: Alan Moon's estimable Elfenland. Elfenland. 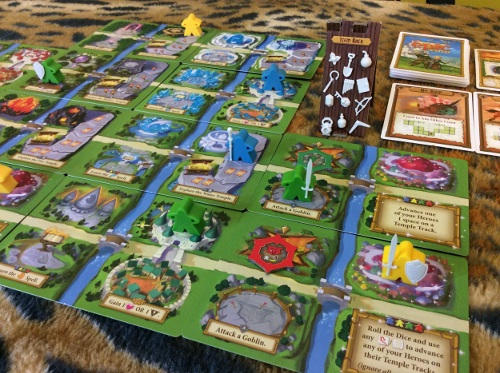 TEQâ€™s overworld map is both colorful and functional.

Like Elfenland, TEQ is primarily a game about travel through a magically convoluted transportation network. A blob-shaped grid of oversized map cards forms the layout of the Mushroom Realm, with its temples, obelisks, grottoes of helpful mushroom folk, and goblin-spewing portals. In this topsy-turvy land, each direction of movement requires a different mode of transportation: rivers only flow north-to-south, roads only run east-to-west, and thermals only blow diagonally. During the day, four of the five movement cards are drafted using a Puerto Rico-style follow-the-leader mechanic: one player picks a card, then everybody gets to move one meeple in that way, hoping to fulfill quests or set themselves up for daring deeds at night.

Movement is only half the game, however. When the sun sets on the Mushroom Realm, players have a chance to participate in a shared push-your-luck bout of dice-rolling that feels like a cross between XCOM (the board game) and Incan Gold. Players pass around the custom dice, which allow them to progress on three types of objectives: punching out goblins, exploring temples, and learning spells. However, some dice are harmful: goblin faces deal damage directly, while magic mushrooms (needed to learn spells) raise the stakes as the magic token progresses along a shared track. Both good and bad results are shared among the players, no matter whoâ€™s rolling, but players whoâ€™ve had enough can always choose to bow out, sending their heroes home--hopefully, with some of their objectives completed--and evading any further danger or reward. 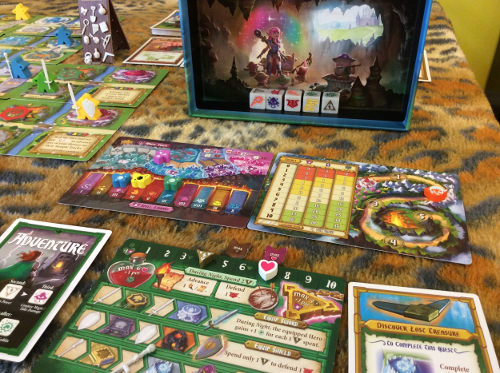 Accomplish as much as you can in five rounds, but donâ€™t push your luck too far.

This is the first Tiny Epic game to showcase a premium hardware innovation, in this case the ITEMeeplesâ„¢, plastic meeples with pegholes to equip the magic items that might be found within the temples, granting that hero special bonuses in future rounds. Aside from the legendary sword, shield, and staff available to all players, these treasures are all quest rewards served up on a first-come basis, so thereâ€™s a real race to complete temples, but the Agricola-style scoring system means youâ€™ll want to diversify your activities. Besides, killing goblins and learning spells offer their own in-game rewards, increasing your max health and power (a resource mostly gained and spent at night). Going after movement quests, which require you to line up your meeples in specific ways, might leave you without much to do when the sun sets.

Unfortunately, the game suffers a bit from its small scale. Having only three meeples per player makes the night phase too predictable. Since you seldom have occasion to go after multiple kinds of the same objective in one night--there just isnâ€™t enough manpower--you never have to push your luck far to get everything done. More meeples would mean higher stakes and more tough decisions about when to throw in the pointy cap. Thereâ€™s also a terrible kludge of a rule about which types of quests can be available at any time. It can result in cycling through half the deck each time you turn over a card, which is annoying to all players but especially the ones who had positioned themselves for something only to have it disappear under their noses--which, again, is only made worse by the inability to pursue multiple objectives at once. A semi-official house rule is more or less mandatory.

There are other, minor issues of balance. The bow, which allows a hero to attack goblins on adjacent cards, can give a single player a huge advantage, while other treasures that make killing gobbos faster have little impact, since you often have no problem getting it done unaided. Having each player tackle temples in a different order to unlock their legendary sword, shield and staff sounds great, but it can also give advantages to certain players if the treasure quests come out in an order that lets them (and only them) kill two birds with one stone.

Tiny Epic Quest is the best-produced Tiny Epic game to date; itâ€™s impossible not to love the colorful, retro realm. On the other hand, the Tiny Epic well of creativity may be starting to dry up. Tiny Epic Questâ€™s push-your-luck dice-rolling phase and follow-the-leader elements feel a bit too similar to Galaxies, the setting and smorgasbord-style scoring are a rehash of Kingdoms, and the movement-based quest cards give me flashbacks to the most regrettable entry in Gamelynâ€™s catalog, Fantasy Frontier.

So far, every Tiny Epic game has been marked by big fun, big creativity, and not-so-big long-term prospects, and Quest is no exception. It would be a mistake to judge it on the rubric of a $50 game, though; until the fun wears off, Tiny Epic Quest is a magic mushroom trip.